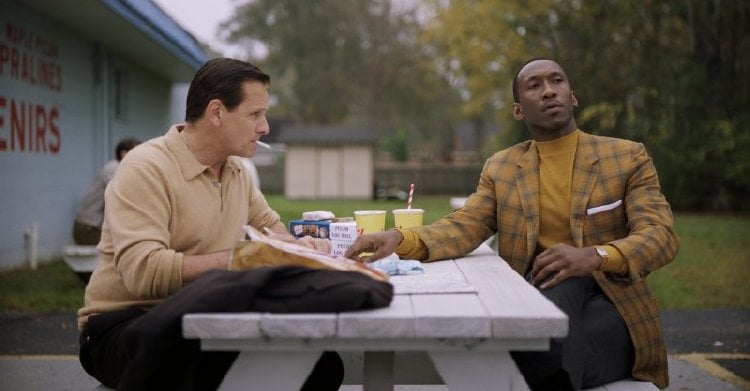 Tony Vallelonga (Viggo Mortensen), known as Tony Lip to his pals, is a bouncer and small time hustler looking for work to support his wife and two kids in the Bronx when the Copacabana Club closes for renovations. He gets a lead on a driving job, but when he meets Dr. Shirley (Mahershala Ali), he was expecting a white doctor, not a renowned black pianist expecting valet services. But Tony relents after Shirley calls and speaks to his wife Dolores (Linda Cardellini), asking her permission to take her husband away for two months and ceding to Tony's demands. The bigoted Goomba is in for quite the education when he learns that driving through the Deep South with an African American in 1962 requires following advice in the "Green Book."

Cowriter (with Nick Vallelonga, Brian Hayes Currie)/director Peter Farrelly has come a long way from "Dumb and Dumber" with this heartfelt and crowd pleasing true story about a most unlikely friendship. Tony is unrefined, a talker with a New Yawk accent, a sloppy and voracious eater and chain smoker with little education but a lot of street smarts. He's also an extreme bigot, appalling his wife when she finds two glasses in the trash, deposited there by her husband because they'd been used by two black repairmen. Dr. Shirley, on the other hand, is worldly, highly educated, meticulously groomed and refined. He doesn't smoke and is quiet and guarded. Both are charming in their natural habitats, but the confines of a turquoise Cadillac Seville, initially at least, prove challenging. Farrelly sets his stage between Manhattan and the Bronx, Tony using his last day at the Copa to con a mob guy, then raising cash by pawning his watch and outeating Fat Paulie on a $50 bet. He lives in a cramped apartment that is clearly loving home. When he locates Shirley's apartment above Carnegie Hall it completely contrasts his own, spacious with a servant (Amit, Iqbal Theba), towering elephant tusks, a Steinway grand piano and even a throne. But "Green Book" is a road movie and once that caravan of two turquoise Cadillacs sets off, the second transporting The Don Shirley Trio's cellist Oleg (Dimiter D. Marinov) and bassist George (Mike Hatton), we off on one helluva ride. At first, things aren't all that different, Tony amazed to be introducing Shirley to the music 'of his people' - Little Richard, Chubby Checkers and Aretha - which Shirley begins to appreciate even as he objects to Tony's constant nattering, distracted driving and smoking. Tony's amazed by their accommodations and the perks of the road under Shirley's touring contract. Knowing music from his extensive exposure in Manhattan clubs, Tony also recognizes Shirley's genius, listening to the man's piano playing with respectful awe. But soon after Tony's just about lost his mind over the joy of eating Kentucky Fried Chicken in Kentucky (and teaching Dr. Shirley, who's never had fried chicken of any kind, to throw the bones out the window), the Green Book's relevance kicks in when Tony pulls into the Carver Courts Motel. 'It looks like my ass,' observes Tony, reluctant to leave Shirley there while he stays elsewhere. Tony takes his job seriously, becoming protective of his boss, demanding his contractual stipulations be met. Where he once stayed outside tasteful gatherings, he now enters, witnessing rich white people fete the musician with, ironically, fried chicken, then deny him use of the house bathroom. A middle of the night call results in Tony learning something else about his boss, something scandalous for the time that Tony is surprisingly open minded about. In one of the film's best scenes, Dr. Shirley, afraid Tony will now leave him mid-tour, tries to offer a promotion and pay raise that Tony will not hear of. In another, Dr. Shirley helps Tony write a letter to his wife, one that expresses Tony's actual feelings instead of his usual litany of events, delighting Dolores back home. Everything comes to a climax with a Christmas Eve concert and a rebellion against the Jim Crow South that ends in an unexpected musical performance of another kind. Battling a snowstorm in order to get Tony home in time for Christmas ladles on more surprises. There is absolutely nothing new about "Green Book," not conceptually nor cinematically, but it is just about note perfect. It was Farrelly who thought of casting Mortensen, a brilliant idea as it turns out, the actor disappearing under an additional thirty pounds and the Italian American aura he soaked up from the Vallelonga family (who also star in Bronx set scenes). Ali is also in top form, his protective shell thawing as he gets to know the man behind the brash bluster. Cardellini may only appear in a handful of scenes, but her presence lingers, a wife wise to her husband's ways who loves him unreservedly as we fall in love with her. The period production is aces, locations around New Orleans standing in for the entirety of the Don Shirley Trio tour. And, of course, the music is wonderful, Shirley's classical, jazz and Gospel compositions mixed with Tony's radio tunings. Grade:

Esma (Mirjana Karanovic) is a hard working but underemployed single mom obsessed with coming up with the 200 Euros needed to send her teenage daughter Sara (Luna Mijovic) on a school field trip. Coming up with the money is no mean feat, but even more daunting is the secret Esma hides from Sara about her father in Grbavica.” Debut Bosnian filmmaker Jasmila Zbanic creates a moving character study of a woman trying to make a life in a country recently torn apart by civil war. Esma is desperate for a job and takes one as a cocktail waitress at a local night club, lying to hide the fact that she has a child. But, as the day of the field trip closes in, it seems unlikely that Esma can come up with the dough. This dilemma forces her to tell Sara the truth about her life. This is a finely crafted, well acted (from top to bottom) story that immerses the viewer into Esma’s life as a “war widow” in Sarajevo. Mirjana Karanovic steeps herself in the roll of the harried mother and realizes a real, 3D character whose dark secret is only outweighed by her love for Sara. Sara, on the other hand, is petulant and stubborn as teenagers can be and her budding sexuality is a cause for Esma’s concern. Their relationship is believable, making this a good mother/daughter yarn. The aftermath of the Bosnian civil war is a rich vein of storytelling material and newcomer writer/director Zbanic mines it well. Here’s hoping we see him making more movies about a world little seen in the west.