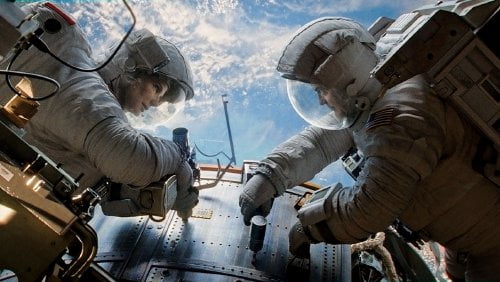 "At 600km above planet Earth, the temperature fluctuates between +258 and -148 degrees Fahrenheit. There is nothing to carry sound. No air pressure. No oxygen. Life in space is impossible."

Dr. Ryan Stone (Sandra Bullock) is on her first space mission under the command of Matt Kowalski (George Clooney). He's very entertaining, a joker in a jet pack, but she's not enjoying the physical aspects of the trip. When Mission Control (voice of "The Right Stuff's" Ed Harris) warns that space debris from a Russian station blown apart by one of their own missiles is approaching with the speed of a bullet, Dr. Stone tries to complete her tasks, but she's too late, they're hit and she finds herself untethered, spinning in deep space, wishing for "Gravity." Cowriter (with son Jonás)/director Alfonso Cuarón ("Children of Men") breaks new technological ground with this mind-blowingly realistic immersion in space. Working with lightboxes, robotic rigs and wires to suspend and reflect light upon the actors, cinematographer Emmanuel Lubezki's ("Children of Men," "To the Wonder") cameras appear to operate almost non-stop, following, circling and closing in the action so as to give the audience the impression they're right within the scene. But while the story grabs us at the onset, it's clear homage to "2001's" Starchild in the form of Stone's character coming to grips with the loss of her daughter is so overt, the film's third act loses credibility as it toes its symbolic line. Dr. Stone couldn't be in a scarier place after she's thrown from the robotic arm where she was working. Spinning end over end, she cannot communicate with Mission Control and her oxygen is running dangerously low, Major Tom floating without his tin can. But Kowalski can still talk to her and, after some calming techniques, gets the information he needs to find her. Once they discover their own station has 'catastrophic damage' and no survivors, he formulates a plan that involves getting to the International Space Station (ISS), then moving on to the Chinese station which has a pod they can hopefully make their return in. As he carefully ekes out his pack's remaining gas, he tries humor (the more dire the situation, the more he believes he can break Anatoly's spacewalk record) to try to keep Stone from sucking air, then turns to getting her to talk about herself. What we hear is a sad tale of a bereft woman whose life consists of driving aimlessly when she's not losing herself in work. From the film's very beginning, though, the Cuaróns are using their space disaster flick as a means to illustrate the creation of life. When we first meet Stone, she's suffering from nausea and every event that follows is a metaphor for birth/rebirth up to a child's first unsteady steps. Fetal and birthing imagery abounds. A lullaby even comes into play. While this is all well and good in and of itself, there's little subtlety to it and Stone achieves one incredible feat after another to accomplish the filmmakers' vision. Bullock is very good here in what was obviously a physically demanding role. After a more typical outing in "The Heat" earlier this year, it's good to see her stretch into more dramatic territory. She's had a very solid 2013 on both ends of the spectrum. Clooney's usual movie star charm is used to good effect, but this is Bullock's movie. But of course the main reason to experience "Gravity" is for the sheer beauty of its visuals (effects supervised by "Avatar's" Tim Webber) and the eerie aural sensation of a vacuum (sound designed by Glenn Freemantle, "Dredd," "Trance"). Cuarón builds real suspense, never more so than when safety is right at hand (those airlocks!), but it all tumbles apart just when it should be at its most excruciating.