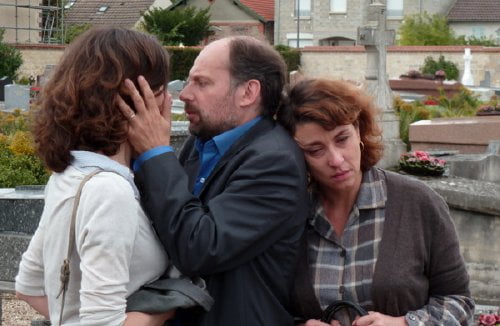 Armand Lebrecq (Denis Podalydes) has dreamed of being a magician since he was a small boy. Things did not turn out that way and Armand married and opened a pharmacy with his wife Helene (Isabelle Candelier). Married life, though, is not for him and he begins an affair with his dentist, Alix (Valerie Lemercier). But things will continue to not go as he wants when he learns he has to plan “Granny’s Funeral.”

"Granny's Funeral" is really the impetus for Armand to reevaluate his relationships with the women in his life, including his wife, mother-in-law and mistress. There's a lot of black humor to the film, especially regarding the rituals surrounding death, but the filmmaker/star is a little too eager to allow Armand to have his cake and eat it too.

I checked the one user review for “Granny’s Funeral” that I found and it lambastes the movie. But, it is part of the French Film Fest at the Museum of Fine Arts in Boston so I had to see for myself. After watching this often laugh out loud funny movie, I wonder if that reviewer saw the same film that I did. Sibling writers Bruno and Denis Podalydes create a very enjoyable film that has many levels of humor – from slapstick to satire. As the title implies (the original title is “Adieu Berthe – L’enterrement de meme”), granny and her demise is the glue that holds things together. Armand receives the bad news from his son, Vincent (Benoit Hamon), about the granny that the family says was “so discrete, you forgot her.” Suddenly, Armand has to take the role of family patriarch and assumes responsibility for her funeral. There is a snag, though as his bossy mother-in-law Suzanne (Catherine Hiegel) insists on “helping out” with the costs – meaning she wants to take over the proceeds. She forces Armand to use her choice of funeral home, the high tech internment and crematory institution run by snooty funeral director Charles Rovier-Boubet (Michel Vuillermoz). Armand, though, is opposed to his mother-in-law’s intrusion on his family duty and consults another funeral director, Yvon Grinda (Bruno Podalydes), to assist in Granny’s burial. Grinda is the opposite end of the funeral biz spectrum and uses E-bay to sell used funeral items. He also buries pets. The two funeral homes become the battleground between Armand and Suzanne. Meanwhile, he also has to deal with having both a wife and a mistress and not wanting to give up either. The humor is mostly of the obvious slapstick situation kind. For instance, there is the ongoing gag about Armand’s ring tone, an obnoxious wolf-whistle that grates on your nerves and is in bad taste (but amusing nonetheless). The satirical riff on the funeral industry shows the absurdity of both the online burial industry (a remote controlled coffin eliminates pallbearers) and the stone and mortar internment biz. The Podalydes brothers also take a stance on the blind adherence society has for funerals and their outrageous and burdensome cost to the families of the dearly departed. Acting, as one would expect in a goofy comedy, is exaggerated and the dialog loud and fast. The Podalydes brothers wear several hats as writers, actors and director and the film belongs to them. Armand may be the main character in this little play but it is truly an ensemble effort with lots of amusing players. The story subtlety brings the amateur magic from the film’s opening moments and makes it, and granny, a real force in the film. This is a feel good movie about a funeral, which should be a contradiction of terms, but is not