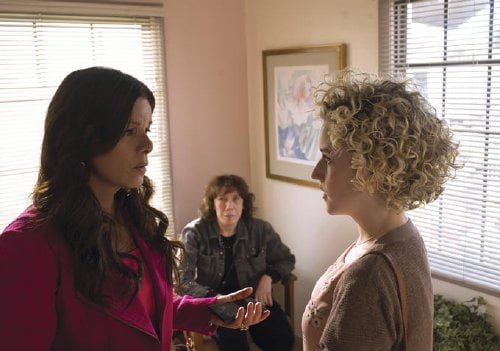 Elle Reid (Lily Tomlin) is settled in her way of life. She is broke but financially solvent, too. Her granddaughter, Sage (Julia Garner), shows up on her doorstep one day in desperate need of $630, which Elle does not have. The two hit the road on a mission to get the cash and take care of the problem in “Grandma.”

Afraid of her professionally driven single mom's reaction, Sage (Julia Garner, "We Are What We Are," TV's 'The Americans') turns to another maternal figure when she hasn't got the $630 she needs for an abortion, her Bohemian "Grandma." After working with Tomlin on the Tina Fey vehicle "Admission," writer/director/producer Paul Weitz ("About a Boy," "Being Flynn") was inspired to write a small character-driven comedy for her. We should thank him for doing so because it is a sheer delight to watch Tomlin interact with a widely varied supporting cast, putting subtle spins on each encounter that builds Elle Reid from the outside in. When we first meet her, Elle's coldly ending her relationship with the much younger Olivia (Judy Greer, "The Descendents"), treating her like a meaningless rebound from the recent loss of lifetime partner Violet ('You're a footnote'). But as soon as Olivia's left, we can see the protective mask fall. By the time Sage shows up, Elle's reminiscing in her old academic cap and gown from her 'writer in residence' days as a feminist poet. When Sage admits why she's there, Elle's judgement is that everyone is stupid at her age, but Elle's life spent as a creative type on the fringes hasn't left her with financial stability - she's got $47 to her name. And so off they go in her unreliable 1955 Dodge Royal Lancer (Tomlin's own car) in search of fast cash, Sage's 5:30 appointment looming on the horizon. First up is the responsible male party, Cam (Nat Wolff, "Paper Towns"), who simply shrugs that he could not get the promised money. Elle beats him with his own hockey stick, not her last violent encounter of the day, before leaving with the cash he's got on hand. Throughout the day, Elle visits people and places from her past. A trip to the free clinic Elle's familiar with reveals a new coffee shop in its place, where she's thrown out by the owner for upsetting customers. There is tattoo artist Deathy (Laverne Cox, TV's 'Orange Is the New Black'), who can't repay the $400 she owes but treats Elle to new ink (an 'O' leading to much speculation on Sage's part). An attempt to sell her 'first editions' (wine stained copies of such books as 'The Feminine Mystique') to cafe owner Carla (the late Elizabeth Peña) leads to a shouting match and encounter with Olivia, who waitresses there (not to mention upsetting more customers). The most revealing visit is to Karl (Sam Elliott) who initially appears the most likely to come through until Sage's honesty lays bare his history with Elle. In the end, the exasperated duo end up just where they least wanted to be - at Elle's daughter Judy's (Marcia Gay Harden) office. Tomlin is a joy to watch as she weaves and darts her way through her own past and near present, abrasive, yes, but also funny, maternal and supportive in surprising ways. Her quickness to anger ties her to Harden, her free spirit to Garner. The intergenerational aspect of the story will resonate with anyone who's found a family port in a parental storm, the casting of Tomlin, Harden and Garner one of the best in recent memory for genetic likeness. Weitz has a good sense of how parental quirks drive their children in both similar and opposite directions and how relationships skipping a generation allows for clearer perspectives. This road trip movie with a feminist slant is full of warmth, introspection and humor, most notably at its climactic clinic visit. Sage's abortion may be a MacGuffin of sorts, but it is not treated lightly, even if its political fallout is - 'I was slugged by the Bad Seed' indeed. Grade:

Writer/director Paul Weitz is one lucky man. He had the opportunity to unleash Lily Tomlin in what can be viewed as a one-woman show and career best. When Elle is confronted by 16-year old Sage’s predicament – guess what her problem is – the grandma gene kicks in. What follows is a buddy road movie as Elle and Sage, in Elle’s 1955 Dodge Royal (the actress’s own car), make an odyssey to call in markers from Grandma’s old friends. Lily Tomlin dominates the screen every minute on the screen – which is the entire film – giving Elle great depth. She’s an academic (former), poet, intellectual and irascible, the kind of person who burns their bridges and speaks her mind – everywhere to anyone. It is a tour de force performance for Tomlin, one I hope is remembered at the end of the year. While Elle is number one in “Grandma,” the supporting cast is first rate. Julia Garner works well with Tomlin and you feel Elle’s gruff affection for her granddaughter. Their mission brings them from one colorful character to another – played well by Marcia Gay Harden, Judy Greer, Elizabeth Pena, Sam Elliot, John Cho, Laverne Cox, Nat Wolff and Sarah Burns - making the film a series of chapters highlighting each stop the duo make to get the $630 –that they need in just hours. Though the road trip story has been done many times before but “Grandma” has a lot of heart, even in its clichés. And, there is Lily Tomlin