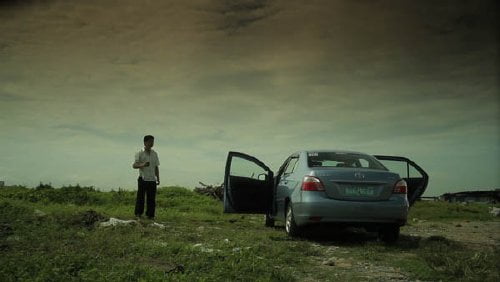 Marlon Villa (Arnold Reyes) is a hard-working chauffeur in Manila, one of whose clients is a corrupt congressman, Manuel Chango (Menggie Cobarrubias). On one fateful day, Marlon has his daughter, Elvie (Ella Guevara) with him when he picks up Chango’s daughter, Sophia (Patricia Ona Gayond) to take her home from school. On the way, the car is stopped by a gang of men, a shot is fired and Elvie is kidnapped. This tragic case of mistaken identity will turn Marlon’s life upside down as he desperately tries to save his daughter in “Graceland.”

As part of his job working for corrupt Filipino politician Manuel Chango (Menggie Cobarrubias), Marlon Villar (Arnold Reyes) must deal with the aftermath of his boss's predilection for having sex with girls the same age as both of their daughters. When the grandmother of Chango's most recent victim goes to the media, Marlon, who is struggling to come up with cash for his wife's desperately needed organ transplant, is fired. He still takes 12 year-old Sophia Chango (Patricia Ona Gayond) and his daughter Elvie (Ella Guevara) to school that day and as fate would have it, is stopped by a cop who is actually a kidnapper. But it's Marlon's daughter who is taken and he must try to ensure her release without letting on that Sophia is already dead. Marlon is now also the prime suspect in "Graceland." Watching writer/director Ron Morales' harrowing account of poor people's struggles in a violent and corrupt country is a sharp reminder of just how unrealistic entertainments like "Taken" really are. Arnold Reyes' devastating performance of a family man trying to navigate an impossible situation couldn't be further afield from Liam Neeson's bravado, and it's all the more emotionally gripping for that. Marlon is beaten down at every turn. He is treated like the devil by the old woman who wants to know just what happened to her granddaughter. He is admonished by his boss's wife Marcy (Marife Necesito, "Mammoth") for not having dropped off his own daughter before picking up hers and must deal with Elvie's desire for Sophia's cast off cell phone. When he goes to pick up the two girls, they are just arriving themselves, having clearly cut school, and a teacher is alarmed when she sees him yelling at them in the street. He assures her everything is OK, trundles them into the car and takes off. Then his nightmare really begins. There is no more vivid a picture of desperation than that of Marlon, left in a remote area with a dead girl, his own taken. His pleas of 'Help me!' go unanswered. When Detective Ramos (Dido De La Paz) gets involved, Chango points at Marlon as a suspect (Marcy, in one of the film's few portrayals of decency, supports him). But out of necessity Marlon must lie and, directly in contact with the kidnappers (over that coveted cell phone), is forced to do the unthinkable, all the while attempting to shield his worries from his wife, Lina (Angeli Bayani), who lies in critical condition in a Manila hospital. The film gets downright seedy when the kidnappers' motivation becomes clear and Morales ends with a double whammy of a wallop, Marlon further implicated in the ugliness which surrounds him. The film is shot with a gritty immediacy, showing us Manila from the inside out. "Graceland" is a complex tale of how the evils of money and power not only affect those without, but make them complicit in order to survive.

Long-time camera technician Ron Morales brings us his sophomore writing/directing effort based in the Philippines, primarily in Metro Manila. The story of abduction has been done before – “Ransom” and “Taken” jump to mind. But Marlon is not a billionaire or a man “with a certain set of skills.” He is an everyman who is in way over his head but needs to save his daughter and will do whatever he needs to do this. Marlon has to face the threat from the kidnappers who demand a $2 million ransom or Elvie’s life is forfeit. He is also burdened with the corruption of sordid Chango – who cares more about his power base than his daughter. The corrupt cops investigating the case, led by Detective Ramos (Dido de la Paz), have a different agenda. “Graceland” is a suspense thriller that foregoes convention and does not end as one would expect. “Graceland” is not a happily-ever-after story. It is a tough, gritty kidnap tome that pits underdog Marlon against ruthless kidnappers, a corrupt politician and equally corrupt cops all working their own agenda. Marlon evokes our sympathy and Arnold Reyes does a good job portraying the downtrodden driver who just wants to save his daughter. It is not an original idea but Ron Morales makes it different and unique.