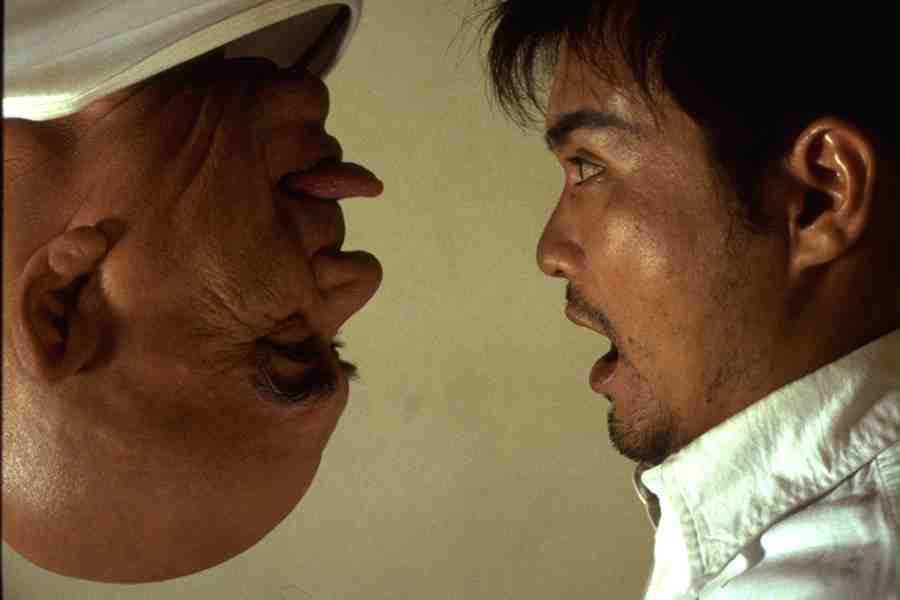 Minami (Hideki Sone) is a loyal member of the Yakuza Azamarawi crew and near idolizes his older clan brother, Ozaki (Sho Aikawa). But, Ozaki’s sanity is in doubt and the crew boss (Renji Ishibashi) secretly orders Minami to take him to the Yakuza disposal site in Nagoya. This straightforward mission for the young gangster takes unexpected twists when Ozaki accidentally dies on the way to his death in “Gozu.”

An entire Yakuza clan witnesses the mental breakdown of Ozaki (Sho Aikawa, "Dead or Alive" trilogy), one of their own, and the clan boss (Renji Ishibashi, "The Sea Is Watching") orders Ozaki's protege Minami (Hideki Sone) to get rid of him in the Yakuza dumping ground in Nogoya. On the way Minami accidentally kills his revered mentor and once there, he loses Ozaki's body. Minami's search for his Brother leads him through the gates of hell guarded by the demon "Gozu." Cult director Takashi Miike ("Audition," "Ichi the Killer") crosses "Weekend at Bernie's" with "U-Turn" as if he arrived via David Lynch's "Lost Highway" to come up with his latest bit of boundary-bashing. Chihuahuas meeting horrific ends, a lasciviously lactating innkeeper, and a pair of lacy, red crotchless Givenchy panties are all part and parcel of Miike's horrific yet funny landscape. Screenwriter Sakichi Satô ("Ichi the Killer," also appearing as a transvestite cafe owner here) references Buddhist mythology creating obstacles for Minami's path towards professing true love for his Brother Ozaki. Minami (a name Miike could easily have chosen as a twisted reference to Mini Me) arrives in Nogoya in his vintage Mustang and visits a cafe run by transvestites and frequented by witless locals who repeat the same dialogue endlessly. When he leaves, he discovers Ozaki's body is missing and panics. The only local cop is from Hong Kong and not the first to ask 'You ain't from Nagoya, are ya?' before offering little in the way of help. Minami is also pseudo-assisted by Nose (Shohei Hino), a character inspired by Robert Blake's Mystery Man, who leads him back to the cafe where everyone pretends they've never seen him. Things get weirder at the Makasazu Inn run by an incestuous sister (Keiko Tomita) and her brother (producer Harumi Sone). After turning down the sister's frequent offering of her own breast milk, Minami dreams of the cow-headed Gozu, who drools semen and licks his face. The next day Minami travels to the junkyard where the proprietors recall disposing of Ozaki in their crusher and show the young man his elder's tattooed skin hanging amongst hundreds of others in dry cleaning bags. Leaving, Minami discovers a woman, Sakiko (Kimika Yoshino), in his car. She claims to be Ozaki and backs up her claim with the very intimate secrets Minami shared with his Brother. When 'Ozaki' seduces Minami, things get really weird. I haven't even mentioned the bean shop where an American woman recites Japanese phonetically or the crime boss's sexual habit of inserting soup ladles where the sun don't shine (this leads to a demise worthy of Edward II)! "Gozu" is mostly notable for its bizarre (and often beautiful - watch for a horizon featuring a Ferris wheel and belching smokestack silhouetted against a blood red sky) imagery and its homosexual theme. Minami is pointedly proclaimed a virgin and Miike cleverly punctuates his status with his Yakuza tattoo, which is only an outline, not yet fully formed. The young Yakuza shies away from the breast (a dripping light fixture overhead contaminates his meal at one point) until it is proffered by his Brother. Yet while "Gozu" is stuffed with ideas and full of Miike's gleeful hijinx, it suffers slogging through a few slow stretches which undercut its impact. A final "Jules et Jim"-like freeze frame is tossed off with a silly explanation for the mind-blowing scene which precedes it, the writer and director probably chortling over their freeze-dried reference.

When we meet Ozaki, the man’s dementia is so apparent – he warns his boss of a “Yakuza attack dog” in the guise of a cute little Chihuahua before smashing the defenseless little beastie to the ground – Minami is ordered to dispose of the veteran thug. Ozaki, thinking that the younger man is just his driver and servant, unwittingly goes along with the plan. When one of his lunatic outbursts nearly ends with the shooting of an innocent woman, Minami knocks his mentor out. As they proceed to Nagoya they have an accident and Ozaki is killed. Then, Minami loses the body and he frantically tries to find the elusive corpse. “Gozu” is a complicated and oftentimes jaw-clenching film that channels itself to Takeshi Miike fans and those with a penchant for gross out, cerebral horror. It helps to be tolerant of excess as the auteur does a pretty fair job at creating a Japanese David Lynch movie, borrowing liberally from the American maestro’s works, “U-Turn” and “Lost Highway.” He goes the Lynch one better with his inclusion of the title character. Gozu is a legendary creature from Japanese myth with the head of a cow and the body of a man, the gatekeeper to Hell. The minotaur-like creature, with all of its disgusting secretions, appears before Minami in a dream sequence. But, is it a dream? I found “Gozu” a difficult study after the first 30 to 40 minutes. At this point, Ozaki is out of the picture, apparently dead and missing. The departure of the character reps a letdown as the action shifts from Ozaki’s insanity – some of the darkest, funniest bits in the film – to Minami’s plight. This is where the film enters a surreal world involving the aforementioned Gozu, a woman milking her breasts, the oddball owners of an of-the-beaten-path inn that oozes a milky fluid from the ceiling, incest, reincarnation and rebirth. I haven’t had a lot of exposure to Takeshi Miike’s copious film catalog but have seen “Audition” and “Ichi the Killer,” at least. Both are extreme in their violence, which takes on an air of the surreal. “Gozu” reps a leap in the surrealism factor and, if possible, is more out there than the latter films. There is black humor leavened into “Gozu” but it is its jaw-clenching scenes, usually involving shaded homoeroticism, which gave me the most difficulty in watching. I’m not the squeamish type but “Gozu” had me clenching my jaws for many minutes at a time. It may not be considered the most enjoyable film-going experience for the masses but it sure shows that Miike knows how to push buttons. Fans of Yakuza horror movies finally get their day.