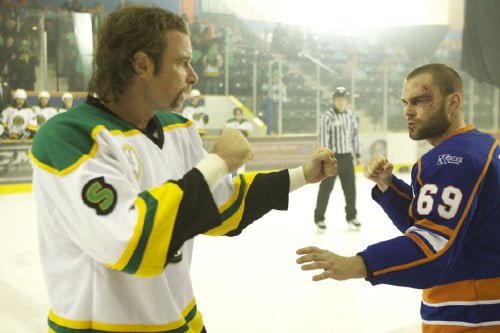 Doug Glatt (Seann William Scott) is a genuinely sweet and gentle young man who loves his more ambitious family (dad is a doctor, brother is a gay doctor) and happens to be very good with his fists. His pugilistic prowess as the bouncer at a sports bar comes to the attention of a local hockey team and Doug is hired on the spot to be the Assassin’s newest enforcer. Even though he cannot skate, his fists move him up into the semi-pros where, for the Halifax Highlanders, he will be their “Goon.”

Accompanying his buddy and Hot Ice host Pat (Jay Baruchel, "Tropic Thunder") to a hometown hockey game, bar bouncer Doug Glatt (Seann William Scott, "American Reunion") gets into a dustup with one of the players and decks the guy. Pat, impressed as hell, gets it all on video, but he's over the moon when the team's coach, Rollie Hortense (Nicholas Campbell, "Cinderella Man") calls into his talk show wanting to audition Doug for a spot as the Orangetown Assassins's "Goon." It must be said, so let's get it over with - "Goon" is the best hockey movie since "Slap Shot." But "Goon" is a different animal, too. "Slap Shot" was a big, commercial Hollywood film starring Paul Newman that has endured for its nudge wink deviancy, the type of 70's film that the product-oriented studios of today rarely deliver anymore whereas "Goon" is a low budget indie made with passion for the sport. That would be the way the sport used to be, at least, when NHL teams cleared benches to engage in all out brawls. Like back when "Slap Shot" was made. Written by supporting actor/producer Jay Baruchel and Evan Goldberg ("Pineapple Express," "The Green Hornet") and inspired by the book "Goon: The True Story of an Unlikely Journey into Minor League Hockey" and Baruchel's Jewish Canadian hockey playing dad, "Goon" is embodied by a bulked up Seann William Scott as some kind of holy fool. He's sweet natured and recognizes his own limitations, beginning with his IQ, which makes him a disappointment to his high achieving parents Dr. (Eugene Levy, "American Reunion") and Mrs. Glatt (Ellen David, "Barney's Version"). Younger brother Ira (David Paetkau, "Final Destination 2," TV's 'LAX,' 'Flashpoint') is more to their professional liking although they don't know how to react to his male romantic partner. But Doug's gay brother is proud of him, a smart counterbalance giving the number of gay jokes that fly in this film, a seeming requirement of any heavily testosteroned comedy ('If I want any lip from you I'll rattle my zipper'). But the thing is, "Goon" is hysterically funny, the kind of funny that one reacts to physically. Doug arrives at the rink for his audition wearing hockey duds and his brother's figure skating skates. When he finally makes it to center ice, he ends up crushing the competition - his own teammates - with his fists. Coach likes what he sees and works with his new recruit, assuring him that 'It's OK, you gotta be sh%tty to get better.' Once Doug can stay upright, Rollie knows the perfect spot for him - with his brother Ronnie's (Kim Coates, "Open Range," TV's 'Sons of Anarchy') Halifax Highlanders farm team where he can play defender to the once great NHLer Xavier Laflamme (Marc-André Grondin, "C.R.A.Z.Y."), robbed of his confidence by Pat's idol, uber Goon Ross Rhea (Liev Schreiber, "Taking Woodstock," "Salt"), via a 10 point concussion. Rhea himself was suspended, then demoted to the same league, back to his hometown farm team, the St. John's Shamrocks. The media have cast Doug as 'the new' Rhea and it's only a matter of time before they will share the ice for what it sure to be one helluva bout. Director Michael Dowse ("It's All Gone Pete Tong") nails the perfect tone for this film, a fine balancing act of sweetness, profanity, and extreme violence that adds up to outrageous comedy. Action on the ice is well staged, particularly in convincing of Laflamme's balletic puck handling. Dowse and his team also know the value of details, seeming non sequiturs and the little tossaways that add flavor to a film. Many of these rest with the supporting players, and here, for once, is a team we get to know more than usual three players from (and oh what characters they are from the goalie-baiting Russian brothers Evgeni (George Tchortov) and Oleg (Karl Graboshas, "Beastly") to the aging team captain Gord Ogilvey (Richard Clarkin, "Land of the Dead")). Doug gets a romantic interest in the form of Eva (Alison Pill, "Midnight in Paris"), a hockey groupie with a boyfriend who tries to resist the charming lunk. Grondin has a nice arc as a man sunk low into drugs and debauch brought around by the roommate he initially despises. Seann William Scott's finally found a role that may let folks forget Stifler - he's wrapped himself in this like a Stanley Cup winner in the Canadian flag and bulked himself up to look like a street thug. It takes talent to make a story about a series of pratfalls in medical waste endearing (not to mention the talent of the writer's who use it to foreshadow a climactic game moment). But if Scott's terrific, Schreiber is sublime. The Shakespearean actor, donning a 70's era handlebar, gives his enforcer a Zen quality when he's not punching out rivals. Brilliant casting brings abundant rewards. The easily squeamed should be forewarned that no punches are pulled for some pretty ugly on ice violence, but it's all in service of a good laugh. Musical choices are unusually inspired, including opera selections (Turandot, Madame Butterfly), punk, blues, rock and 'Scotland the Brave' on bagpipes. The film's only real failing its use of Manitoba for everywhere from Boston to Halifax. "Goon" is easily the funniest film to be released so far in 2012. Heck, it's probably funnier than anything in years.

What I never expected from this violent and bloody hockey film is a warm-hearted, very sweet performance by Seann William Scott as a young man who makes a career with his fists. When we first meet Doug as a bar bouncer, he is apologizing profusely to a victim he is ordered to beat up by his not-so-nice boss. Scott maintains his true gentleness throughout the film, even as he goes toe to toe with the league’s most notorious enforcers. Also in the beginning, we meet the reigning uber-goon of the league, Ross “The Boss” Rhea (Liev Schreiber). (Doug’s best friend and foul-mouth, mega-hockey fan, Ryan (Jay Baruchel), gives him the moniker “The Thug.”) You know from the very beginning that the Boss and the Thug will do battle in the end. So, you know right off the hockey stick what the climax is going to be in this fast and furious sports flick. That is OK, though, since it is the journey you take with the likable characters that populate “Goon” that make this the pleasure that it is. Besides the copious and brutal hockey action and the ensuing fights, there is a charming love story between Doug and Eva (Alison Pill) that accentuates inherent his warmth and goodness. “You make me not want to sleep with other guys,” Eva tells Doug, returning his affection. This is not just Seann William Scott’s film, though, as the supporting caste creates a true ensemble, with each supporting character unique and three-dimensional. Jay Baruchel is the raunchy comic relief as Ryan, who cannot control his homophobic mouth and is Doug’s biggest fan. The Highlander teammates are distinct with Marc-Andre Grondin as Xavier LaFlamme, the team’s prima donna high scorer who Doug is supposed to protect while on the ice; Richard Clarkin is surprisingly sympathetic as Gord Ogilvy, the team’s cynical captain who copes with a broken marriage, a drinking problem and a career nearing its end; locker room comic relief is handled ably and laugh-out-loud funny with George Tchortov and Karl Graboshas as Evgeni and Oleg, rude and crude Ukrainian brothers. Liev Schreiber, in a small role as the Mt. Everest of hockey enforcers, generates a great deal of sympathy – no easy task since we see him knocking players’ teeth out most of his time on-screen. The hockey action and fights remind me of the Boston Bruins in their 1970s heydays and the (possibly best) hockey movie, “Slap Shot (1977).” The ample blood letting makes you squirm and laugh at the same time and the homophobic humor is not that offensive – well, maybe a little bit. The laughs are frequent and permeate the entire fabric of “Goon.” The filmmakers, director Michael Dowse and scripters Burachel and Evan Goldberg, take the original novel – Goon: The True Story of an Unlikely Journey into Minor League Hockey by Adam Frattasio and Doug Smith – and create a fresh, new sports comedy that may have a measure of cliché, but the filmmakers overwhelm it in a power play that scores.