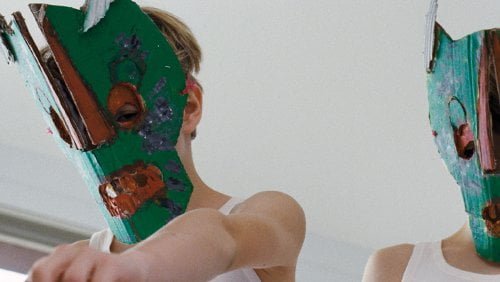 In the Austrian countryside, eleven year-old twins Lukas and Elias (Lukas and Elias Schwarz) are having an ideal summer, playing hide-n-seek in a cornfield, running through a forest, skipping over floating clods of earth. But when their mother (Susanne Wuest, "Antares") returns with her head encased in bandages demanding quiet, her behavior, particularly her cold shoulder towards Lukas, makes the boys question her identity in "Goodnight Mommy."

Cowriter/directors Veronika Franz and Severin Fiala prove themselves masters of misdirection in this psychological horror film in which the less said about the better. With meticulous production design by Hannes Salat and Hubert Klausner and atmospheric shooting (on 35mm) by Martin Gschlacht ("Revanche"), there are clues aplenty to be on the watch for, but even though rather early on I noted similarities to a 1972 American film, I still didn't see the film's big twist coming. After a brief Heimatfilm prologue, in which a traditionally costumed mother sings 'Lullabye and Good Night' surrounded by her perfect brood, we're plunged into an altogether different, much more modern setting, ironically surrounded by idyllic countryside or perhaps the stuff of Grimm fairy tales. Marie-Christine Mettler is an Austrian television personality whose life sized photograph, artistically blurred, dominates her modern home's hallway. Her sons are clearly uncomfortable around her, one sneaking a peak into her bathroom only to be confronted with a bloodshot eye reflected back in a magnifying mirror. After telling them she needs sleep and forbidding them from bringing animals home (the boys already keep an aquarium full of oversized roaches), the kids continue their outdoor explorations, rescuing a cat trapped beneath the ground in a skull and bones strewn cellar. Leo is hidden beneath their bunks, a baby monitor placed beneath mother's bed. Mom relents somewhat, playing a game of 20 questions, yet failing to identify herself, the boys having placed a 'Mama' sticker on her head. Having found Leo dead behind the water heater and a photo book in which dad has been excised but a picture of their mother suggests she has a twin of her own, they make an escape, appealing to the town Priest (Hans Escher), who promptly returns them in the pouring rain. Taking matters into their own hands, the boys bind their mother to her bed, torturing her for proof that she is who she says she is. The film is full of symbols, most notably masks and crosses, the latter in the Church, in a graveyard and via the two Red Cross volunteers (Elfriede Schatz and Karl Purker) who come for a donation and fail to hear the gagged woman upstairs's garbled cries. The imagery is creepy as hell, often revealed as dreams, often left ambiguous. But despite the artistry of the filmmaking, the film's overall impact is muted when we realize we've seen all this before, made with a clearer point. We're left with unanswered questions that fail to get under our skin. Austria's shown admirable riskiness submitting "Goodnight Mommy" for their 2015 foreign language submission to the Academy. Grade: