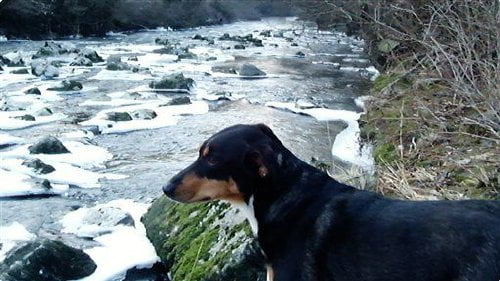 A woman, a man, an illicit love affair and a dog are the components of writer/director Jean-Luc Godard's latest poetic essay "Goodbye to Language 3D."

At 84, Godard is perhaps one of the last filmmakers one would have expected to play with the 3D format, but play he does as he regards the politics of humankind versus nature in ways familiar and new. His first visuals juxtapose nature and war as a red graphic '3D' floats above a flattened '2D.' An outdoor book fair allows for discussion of mobile media and Aleksandr Solzhenitsyn. As archival footage of Hitler is seen, we are told he's one in a line that included Machiavelli, Richelieu and Bismarck. We see Josette (Héloise Godet) siting alone when her German husband arrives, steps out of a car and begins yelling, brandishing a gun. There are two couples, but we mostly follow Josette engaged in an affair with Marcus (Richard Chevallier). They walk about unclothed, engage in the everyday and intellectual conversation, a flat screen television projecting such films as Howard Hawks' "Only Angels Have Wings" and Fritz Lang's "Metropolis." Marcus talks about Rodin's The Thinker as he sits on the toilet, equating his excrement to his thoughts. They also walk a dog, Godard's own Roxy, who is the very heart of the film, Godard telling us that dogs are the only living creature capable of loving you more than itself (we also witness Roxy doing her business, probably not equating it to anything at all). Nothing is linear, far from it, yet the film has a dreamlike quality and Godard's use of 3D is extraordinary. There are stunning images of flowers and the blowing leaves of a tree, their colors pushing outside the boundaries of nature. At one point, he uses the medium to show separate images of the two lovers, a concept my eyes couldn't relay to my brain. Other mind boggling shots include the lovers seen in a glass doored shower via a mirror and a darkened room with a window open to the bright outdoors - 'to show a forest is easy,' Godard says, 'but a room with a forest nearby is difficult' (and this after having informed us earlier that the Indian word for forest means the world!). We revisit many of the places and things found in Godard's last, "Film Socialisme," like gas stations, Africa, a ship, but "Goodbye to Language" is a more emotional, satisfying film. Words and pictures, sound cutting in and out, snippets of classical music (most notably the opening of Tchaikovsky's Slavic March) form a cinematic collage of ideas racing past as we try to grasp them and assemble them into something we can process. There is murder too, a body face down in a bloody fountain, later blood splashing in a running tub. But we keep going back to Roxy and, astoundingly, Godard just about succeeds in allowing us to see the world through the dog's eyes, the implication being that it is the purer form of experience. Grade: