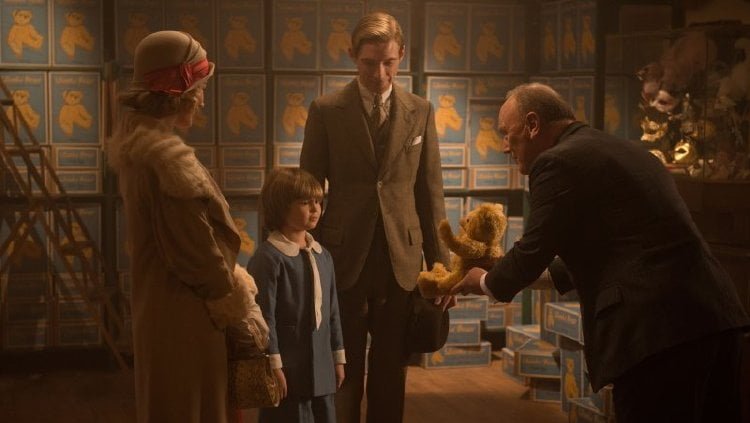 Alan Alexander Milne (Domhnall Gleeson) was a novelist, playwright and poet but he is best remembered for his children’s books about a little boy and his best friends living in the Hundred Acre Woods. How these world famous characters and their stories came to be and the fame and pain they brought to the Milne family is chronicled in “Goodbye Christopher Robin.”

Alan Milne (Domhnall Gleeson) returned from WWI with a severe case of PTSD and an impassioned antiwar stance that made his former life as a London playwright untenable. His socialite wife Daphne (Margot Robbie) wasn't happy about moving to Cotchford Farm in East Sussex's Ashdown Forest, but she brought her young son, 'Billy Moon,' a stuffed bear she voiced to greet his arrival with beloved nanny 'Nou' (Kelly Macdonald). But Daphne, frustrated by her husband's writer's block and their new, quiet life, returned to London just as Nou was called to her mother's bedside. Milne, forced to spend time with his son in an age where his class generally left that to nannies, was inspired by his son's imagination, calling in former colleague and war buddy, illustrator Ernest Shepard (Stephen Campbell Moore, "Burnt") to join their walks in the woods with the stuffed bear Winnie in "Goodbye Christopher Robin." Screenwriters Frank Cottrell Boyce ("24 Hour Party People") and Simon Vaughan (TV's 'A Bear Named Winnie') have made a melancholy, ironic biopic delving into child stardom at a time when Britain latched on to that child's Teddy to ease their post-war pain. Director Simon Curtis ("My Week with Marilyn," "Woman in Gold") mounts a production which contrasts the Bright Young Things of London with the fast-paced glitz of New York and the idyllic English countryside, bringing out various complexions in the relationship of a father and son in each environment. 'Mrs. Milne was unaware of the mechanics of the thing,' the midwife informs her husband as Daphne howls in labor. And indeed, Christopher Robin (Will Tilston at 8, Alex Lawther, "The Imitation Game," at 18), known as Billy (the 'Moon' came from his inability to pronounce Milne), is quickly relegated to the care of Nou in his garret nursery shared by Piglet, Eeyore and Tigger. In the country, Billy still spends time alone, often in the woods. The forced intimacy with his dad after the household's women depart begins rockily, dad's first effort at play rebuffed. But walks in the woods become magical, especially after the young boy talks his dad down from anxiety brought on by buzzing bees. Alan imagines a tree hollow as a home for Owl, installing a handmade door, and engages in games of twig racing from a picturesque bridge ('pooh sticks'). In an attempt to lure Daphne back, Alan sends her a poem he's written about the boy, Vespers. She sends it to Vanity Fair where it's published to great acclaim. But although Blue (Alan's nickname, used by adults and Billy alike) has collaborated with his son on his stories of Winnie-the-Pooh (the bear is renamed for one in the London Zoo, the 'the-Pooh' added for literary mystique), he ignores the increasing signs of distress from the constant media attention. Billy had requested his father write a story *for* him, not *about* him, and resents its public co-option and materialization. A visit to the London Zoo is a press affair where Daphne encourage her son to enter Winnie-the-real-bear's pen for a photo op. A goodnight call from dad in New York is part of a live broadcast. A British Marching Band greets a birthday boy whose parents are away doing publicity. Then the boy's only source of comfort, his beloved Nou, is fired when it comes to light she has a suitor. Gleeson's been racking up an impressive career since becoming known as a Weasley brother and he convinces as the society playwright whose lip wasn't stiff enough for wartime horrors, his reembrace of childhood both therapeutic and financially rewarding, yet ultimately a burden of guilt. Robbie, who oddly doesn't seem to age in a film spanning decades, balances caring wife and mother and spoiled, fun-loving party girl with perfect period pitch. Macdonald is the maternal figure who is witness to her charge's misery, caught between her own needs and those of the boy she's reared from infancy. There are some fudging of the facts, beginning with the film's 1941 prologue, a red herring which is circled back to at film's end with more egregious truth trampling in service to fictional happy endings. But the film's overall message is timeless, Curtis's depiction of the creative process as charming as its results are disillusioning. The film's period details are lovely, all accented by one of Carter Burwell's ("Fargo," "Carol") typically (in all but his signature French horn) beautiful scores. The story behind "Winnie the Pooh" may ultimately be a sad one, but even Christopher Robin, at least in this film, recognizes the bear's enduring appeal. Grade:

I cannot imagine anyone, unless they lived in a cave in Outer Mongolia for their entire life, who has not heard of Winnie-the-Pooh, Piglet, Eeyore, Kanga, Roo, Tigger, Rabbit, Owl and, of course, every kid’s alter-ego, Christopher Robin. But, I bet that few of us know the story of A.A. Milne, his wife, Daphne (Margot Robbie) and their son, Christopher (Will Tilston) - AKA Billie Moon to his father. Simon Curtis helms the telling of the story of the author of two of the greatest children’s (and adults’) books of the 20th Century. Winnie-the-Pooh and The House at Pooh Corner, that brought fame, fortune and pain to the Milne family. This is at a time when the Great War was still recent memory and its veterans, including Milne, suffered silently from what we now call PTSD because of the horrors of that war. The story explores the relationship between Milne (“Blue” to his son) and Daphne and its trials and tribulations as Alan suffers from PTSD, writers block and depression and Daphne Post-Partum Depression after a difficult birth of Billie Moon. Daphne, tired of the years of Alan’s procrastination to write anything, exiles herself (with all the luxury and glamour) to London until he does. Ensconced in their country estate, Alan, now a single parent of sorts, must learn how to take care of a child by himself, with a great deal of help from Billie Moon’s kind and loving nanny, Olive (Kelly Macdonald). Father and son begin to bond with long walks in the woods on the property, inventing characters and adventures with Billie’s stuffed animals – Winnie-the-Pooh and friends are born. “Goodbye Christopher Robin” studies the cost of fame on a family and, especially, young Billie. What started out as stories and tales between Blue and Billie become a huge hit in a world still reeling from the devastation of the Great War and looking for some glimmer of hope. Winnie-the-Pooh (Pooh was named after the Winnipeg black bear, Winnie, at the London Zoo) was that glimmer and public response was astronomical. We see, as the story unfolds, the painful cost on the Milne family, especially between father and son. The cast does a first rate job in giving life to Alan, Daphne and, particularly, young Billie Moon. Domhnall Gleeson gives depth to the man tormented with the memories of the war in the Somme. Once a talented author, those memories stop Alan from creating again – until Daphne leaves and he is forced to get to know his son. The world they create helps Milne cope, finally, with the memories and father and son become a creative team in their own private world. Will Tilston, with cherubic face, loving demeanor and dimples is picture perfect as Christopher Robin. Margot Robbie has a tough role as the less-than-motherly Daphne but still garners sympathy, at least a little. The production excels in capturing the time in the 1920s as a world in flux. The Winnie-the-Pooh stories were the first to help salve the terrible wounds of the war, but the emotional cost on the Milne family is not a subject explored. Director Simon Curtis, with a script by Frank Cottrell Boyce and Simon Vaughn, delivers a moving story of the origins of something that is part of the fabric of not just our cultures but of those around the world.