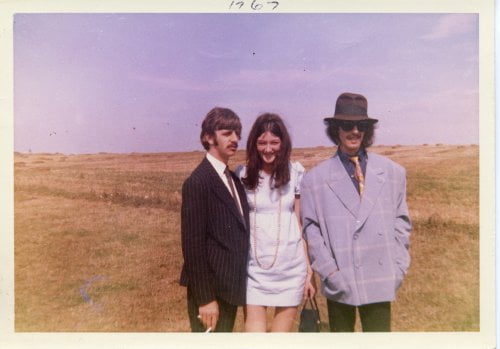 Freda Kelly was thrilled to have a grown up job in a Liverpool typing pool while still in her teens. One day, two male colleagues invited her to lunch and her world changed forever - they took her to the Cavern Club. Freda estimates that if the Beatles played 294 shows there, she was at about 190 of them. She eventually took over management of their fan club. When Brian Epstein established Beatles management offices, she couldn't believe her luck when he asked her to become their secretary and her tight-lipped devotion served them for eleven years. Forty-three years after the band's breakup, cowriter/director Ryan White presents the first person account of "Good Ol' Freda."

Freda Kelly still works as a secretary, but people who didn't know her when rarely learn about her past. This unpresumptuous fan who was in the right place at the right time to get one of the most coveted jobs in the world is a charming subject full of wonderful anecdotes, but don't expect to learn much about the Beatles you didn't already know. The most scandalous admission Kelly makes is that she didn't tell a friend who was dating Lennon that he was married, John's wife Cynthia being kept under wraps at the time. Freda's only telling her story now as a legacy for her grandchildren. The film begins with a 1963 Christmas record made for members of the Beatles fan club, just one instance of the myriad of things Kelly was involved with. The woman who says she 'grew up overnight in more ways than one' seems as innocent today, as full of wide-eyed awe for the men she worked with as the young girl we're introduced to in still photographs. The fact that she related to the group's female fans because she was one of them is this documentary's calling card, but not many fans can open a box in their attic and pull out an envelope labeled 'This is George Harrison's real hair.' Freda was generous to the fans, trying to make dreams come true. She was close to Ringo's mom and George's family which enabled her to do things like get Ringo to sleep on a fan's pillowcase. She's extremely diplomatic about naming a favorite, outlining things about each that gave her joy. She seems especially pleased about having made John Lennon beg her to 'come back' after flippantly firing her in a jokey pique. She describes the filming of "Magical Mystery Tour" as an effort by Paul to hold the band together - he also insisted she stop hiding in the bus's back seat and take one in the front and we see her right behind him in the movie. As she tells it here, Freda's decision to leave her job in lieu of family caused George to say 'Let's call it a day,' Freda's departure as final signifier. Her last official act was one last fanzine to her 'Dear Beatle People' informing them that the band was no more. In addition to rare insider photos, old archival footage and Freda talking from her living room couch, White intersperses interviews from Beatles press officer Tony Barrow and a few others including Paul McCartney's stepmom Angie. White concludes with a video message from Ringo Starr to Freda's grandkids verifying that she was 'one of their family,' but it gives the impression Freda's story needs validation and would have been more effective as a jumping off point. Better and more poignant is Freda's recollection of all the family members - John, George, 'Eppie,' Neil Aspinall and others - who are no longer with us, her own 'in memoriam' segment.