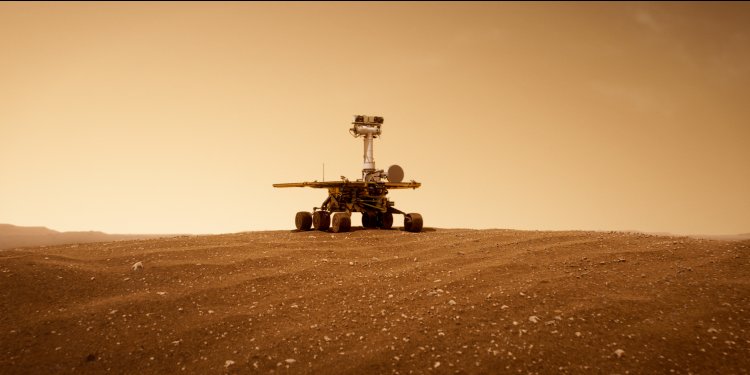 After ten years of submitting proposals, California’s Jet Propulsion Labs finally got the go ahead from NASA to build robots to traverse the surface of Mars looking for evidence of life sustaining water.  They built ‘twin sisters’ named Spirit and Opportunity under a stressful timeline dictated by Mars’s orbit and launched them in 2003.  Against all odds, both landed safely on opposite sides of the planet, each expected to have a 90 day life-cycle.  Fifteen years later, the team had to tearfully tell their old friend, “Good Night Oppy.”

Cowriter (with editor Helen Kearns)/director Ryan White ("Good Ol' Freda") has fashioned an emotional tribute to the engineers and scientists who accomplished an incredible Mars mission, becoming a family in the process.  It’s not just the filmmakers, but the technical team they’re documenting, responsible for the anthropomorphization of the Mars Rovers 'twin sisters' Spirit and Opportunity, both seemingly designed to resemble Pixar's WALL-E, but by the time the documentary has ended you, too, will feel like you’ve lost a little buddy.

White mainly shuttles from a round robin of mission folks including Jet Propulsion Labs' Mission Manager Jennifer Trosper, Lead Systems Engineer Rob Manning, Principal Scientist Steve Souyres, two Rover ‘drivers,’ and two female teens inspired by the project who become part of the team to photo-realistic animation of the Rovers on their journeys by Industrial Light & Magic with Angela Bassett’s narration connecting the various perspectives.   He packs an enormous amount of information into his 105 minute running time without ever forgetting to entertain with little tidbits like Oppy’s autonomous system needing to be reassured she may proceed after becoming alarmed by her own shadow.

The film that grabs us from the onset with the sight of Oppy trundling along Mars’ surface to her wake-up song, the B-52's 'Roam,' also informs us that because a day on Mars, called a SOL, is 40 minutes longer than a day on Earth, the daily meeting scheduled for noon on one week shifts to midnight over time, the team having to work on another planet’s schedule suffering the equivalent of jet lag.  They hit many obstacles along the way, the first being Spirit’s wonky behavior after hitting a rock, causing the Rover to continually crash and reboot, draining her solar power.  The team ‘puts her to sleep,’ praying she will boot up correctly and having to wait for her hoped for transmissions to reach them (her chosen wake-up song is Abba’s ‘SOS’).  When her front wheel breaks, someone’s description of the problem as being like one of those disabled shopping carts leads to the solution of driving her backwards.  Oppy gets stuck literally spinning her wheels, so the team recreates conditions back on Earth to figure out how to get the tractionless wheels out of the jam.

The Rovers’ longevity is aided by an unexpected source – the ferocious dust devils which clean the surface of their solar panels – and although Spirit gives up the ghost in 2011, Oppy keeps on going, traveling farther and farther to the craters where bedrock provides ‘geological truths.’  It is on SOL 3300, 9 years after landing, that Oppy, suffering from ‘arthritis’ and ‘memory loss,’ finds the clay providing evidence of life-sustaining water.

With the plucky little Rover about to hit SOL 5000, her 14th year exploring Mars, the scientific team honors the engineering team’s odd request, programming Oppy to take a ‘selfie’ with a partially disabled arm – it’s a moving moment, the team able to see the Rover for the first time since 2003.  Souyres is called upon to pick his first wake-up call and Oppy’s last with Billie Holliday's 'I'll Be Seeing You.'  It’s a melancholy scene, but White ends on an upbeat note, the 2020 launch of a new Rover, Perseverance.

In January 2004, the Mars Exploration Rover mission landed two vehicles, Spirit and Opportunity, on opposite sides of the Red Planet. The dual mission was scheduled to last for just 90 days of operation before the ‘bots ran down - but one continued to explore and gather and broadcast data to earth for 15 YEARS before we said “Good Night Oppy.”

Documentary filmmaker Ryan White and his team (which includes Angela Bassett as the film’s narrator) tell the life story of the little robot that could – and did so for 60 times its original expected life span. (Oppy’s sister ‘bot, Spirit, lasted for eight years – no slouch, she.)

I say “life story” because the filmmakers treat the title subject, and do an excellent job of it, as the life of a human being. We see the project’s conception, starting with a blank white board. From there we watch as our little robots develop (gestate?), with Spirit the test ‘bot and Oppy the beneficiary of her trial and error. We move on to the launch (birth) to Mars, the landing and the parallel missions where the ‘bots grow and mature. Finally, as they reach the end of the mission, old age (arthritis and memory loss) takes hold. I invested in these little robots’ lives, especially Oppy, and did not want to see them go.

We watch the “parents” of Oppy and Spirit – the teams who saw them through their lives - as they, too, grow and change. Those teenagers who watched and were inspired by the Mars Rover project launch became the mission specialists who oversaw Oppy and Spirit’s long and illustrious lives. They invested their lives into the lives of their robotic explorers and the joy in their “job” is palpable, with every success and failure.

I have been a big fan of man going off to space since I was a kid reading Isaac Asimov and Robert Heinlein. So, “Good Night Oppy” is a no brainer to me, the fan. But, I was not prepared for the emotions the filmmakers got out of me watching the life story of the little robot that could.