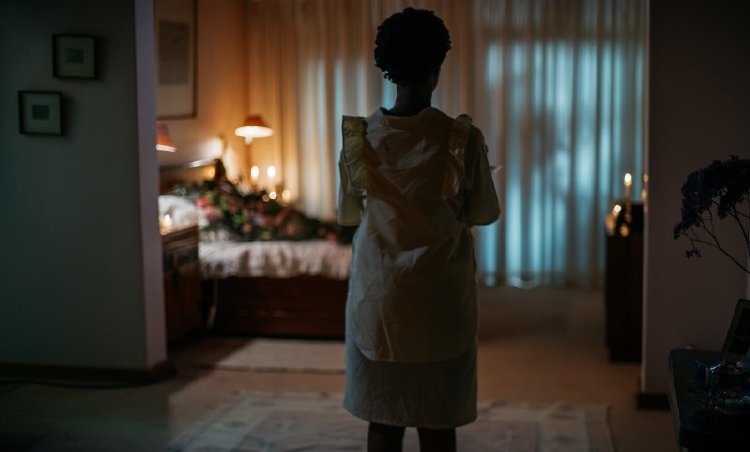 When the grandmother who raised her dies, Tsidi’s (Chumisa Cosa) uncle quickly moves in to take the house, leaving her and her 9 year-old daughter Winnie (Kamvalethu Jonas Raziya) homeless.  She has nowhere else to turn but to Mavis (real life domestic Nosipho Mtebe), her estranged mother who left her thirty years prior to devote herself to raising white children and keeping house for her “Good Madam.”

The South African title for the film, “Mlungu Wam,” translates to ‘my white person,’ and there is clearly something not right about Madam’s sprawling suburban home before Tsidi’s mom allows her to step foot in it.  Cowriter (with producer Babalwa Baartman and star Chumisa Cosa)/cinematographer/director Jenna Cato Bass has crafted her own Apartheid spin on Jordan Peele’s “Get Out,” with a new, delicious twist.   And Bass isn’t just addressing racial issues here, but the patriarchy Tsidi wrestles against within her own black community.

The film opens ominously, water swirling down a metal floor drain as the earth rumbles from below.  Black hands keep scrubbing, scrubbing, scrubbing, the camera panning along a shelf of African busts, before we cut to Tsidi making phone calls to no avail before directing Winnie’s dad Luthando (Khanyiso Kenqa) to drive them to the suburbs.  He grumbles when asked to pick his daughter up for school, complaining that he’ll have to rise at 5 a.m. to make the long drive and that he is ‘not a morning person.’  Tsidi glares.  Then she faces her next obstacle, overcoming her mom’s reluctance to let her in via the intercom at the home’s gated entrance.

Tsidi, who has clearly been here before, glances around nervously, but Winnie has no such reservations, enjoying the new space.  Told that ‘Madam is sleeping’ and not to make any noise, Winnie learns the ‘rules’ – that she cannot run, touch the fridge, go into the pool unaccompanied or go into Madam’s room.  ‘So we should pretend we’re not here even though we are?’ she asks her mother.  Tsidi and Winnie are ghosts in Madams’ house.  But Tsidi will soon discover they are not alone.

There is the husky with piercing blue eyes Tsidi sees which Sisi claims died years ago.  There is the half brother ‘Stuart’ (subtitled as Gcinumzi, Sanda Shandu) whose picture is framed around the house and whom Tsidi seems resentful of, telling her mother he only comes to visit Madam and not her, before defiantly moving into his room in the house.  There is Madam’s collection of glass bells whose sound is a constant reminder of years of servitude and which Tsidi finds her mother dusting in the dark in the middle of the night as if enchanted.  And when Winnie tells her mother she’s found a graveyard at the back end of the property, Tsidi denies it exists until her mother surprises her, stating that not only is it there, but that the family’s servants are buried there.  One night, after only hearing her mother talking to her boss behind closed doors, Tsidi ventures into Madam’s (Jennifer Boraine) room and witnesses a strange accident which Mavis refuses to report.  Then they hear a door bang.

The film is dotted with vague visions and gory nightmares, Tsidi performing rituals as she asks her beloved grandmother to help and guide her.  The sound design is unsettling, the atmosphere oppressive (outside the gates, a female jogger regards Tsidi with suspicion until she dons a maid's outfit).  Bass uses Simon Ratcliffe's score of female voices and traditional instruments sparingly, to good effect and has given the pandemic shot film a glossy sheen, editor Jacques de Villiers maintaining a fluid pace and spooky vibes.

Bass pulls all her threads together for a satisfying conclusion on multiple fronts, ending, as she began, with a phone call, this one a reassuring one to Madam’s son Grant (Steve Larter) in Australia – where a black woman is seen in the background clearing his table.

"Good Madam" begins streaming on the Shudder network on 7/14/22.