Good Luck To You, Leo Grande 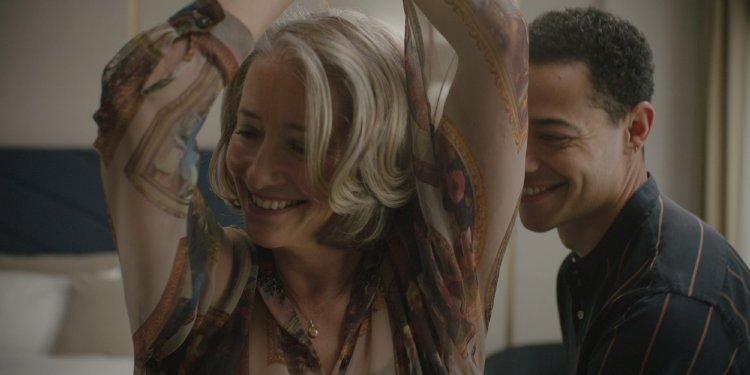 An attractive, sixty-ish woman (Emma Thompson) wearing a conservative suit and low heels enters a nondescript hotel room.  She looks like she’s on a business trip, but when there is a knock on her door, she lets in a good looking young man (Daryl McCormack, "A Good Woman Is Hard to Find," TV's 'Peaky Blinders') who we will be surprised to learn is a sex worker in “Good Luck To You, Leo Grande.”

Conceived and written by British comedian Katy Brand, “Good Luck to You, Leo Grande” is more of a dual character study than the sex positive comedy it appears to be on its surface.  With its first three acts taking place in the same hotel room, a meeting in a lobby coffee shop breaking up its fourth, one might presume the film was adapted from a stage play – it wasn’t, but the opposite path may provide opportunities for actors willing to dig as deeply as Thompson and McCormack do here.

During their first meeting, we learn Nancy Stokes was an elementary religious educator married for 31 years to a husband who died two years prior.  She has a son she finds boring and a daughter who’s anything but.  She’s never had an orgasm, has decided she will never again fake having one and tells Leo Grande he’ll be only the second man she’s ever had sex with.  She’s visibly nervous and wants to ‘get it over with.’

Leo takes all this in with calm, grace and charm, clearly masterful at work he enjoys, keenly attuned to human behavior.  He refuses to accept any easy outs Nancy offers, intent on helping this woman let go and enjoy pleasure.  He’s also not above a little mischievous humor, noting the price tag she’s trying to hide on a new peignoir.  Just as Nancy begins a bitter speech about the stultifying nature of her former work, a deep kiss segues into…Meeting Two.

Thompson, who famously disrobes in front of a mirror in the film’s final moments, is perfection finding the comedy in her character’s hang-ups and imperfections without ever shattering the illusion of reality.  Brand gives her several opportunities to question the ‘why’ of Leo, an entry point into more general discussion of sex work and non-romantic sexuality which some may take moral issue with, but which is one of the elements that make this more than a light romp.  McCormack, who resembles a softer looking version of Rami Malek, has a real breakout role here, the actor constantly teasing and intriguing us as he goes toe to toe with the two time Oscar winner.  He’s magnetic.  Just watch him seduce Thompson through dance to “Your Love Is All I Need.”

Director Sophie Hyde keeps the couple zigging and zagging through their courtship dance, an intricate tension of push and pull.  She and cinematographer/editor Bryan Mason make good use of Miren Marañón’s production space, cleverly designed to look like an average hotel room, yet composed of five distinct areas, lighting outside its windows reflecting changing times of day and weather.

“Good Luck to You, Leo Grande” is a dramedy for adults with a lot more on its mind than sex.

These days you can tell if a movie was made during the COVID pandemic by the sparseness of characters in the telling. “Good Luck…,” with its principally two-hand cast, is just such a work, giving its stars ample chance to thesp.

Nancy (not her real name) is a fish out of her waters as she tries to make a break from her old life and to, finally, live a little. The decision to make a “date” with a sex worker she found (online, of course) was a tough one. As she waits for Leo to arrive, her nervousness almost gets the better of her and she is about to call the whole thing off.

Leo knocks on the door and soon, the charming and handsome young man puts her at ease, sort of. This begins a kind of cat and mouse game as Leo gets Nancy to drop her artificial barriers and longtime inhibitions, walls that have built up over her many years of unfulfilled marriage. She finally loosens up but the date ends before she can even begin to check off her bucket list.
What started out in Nancy’s mind as an experimental one-night-stand begins to flesh out, so to speak, and she makes a second date. Her curiosity, mainly due to Leo’s gentle patience, is peeked and she wants to try more and more sexy stuff.

What we have here is the story of a middle-aged woman’s awakening to find out things in life that she never experience before - like an orgasm. Leo is the catalyst for this awakening and there is a lovely chemistry between the two characters. Emma Thompson is a bit too tentative in the beginning but, as her character unfolds, she gets control and the nervousness becomes pleasure.

Newcomer (to me) Daryl McCormack makes a notable splash as the sex worker with a heart. His likable demeanor and sense of calmness as Leo really helps him create a genuine 3D person. There is a warmth that develops between Nancy and Leo and director Sophie Hyde and writer Katie Brand capture that perfectly.

I was, like Nancy, a little tentative about “Good Luck to You, Leo Grande.” I thought it would be just two-dimensioned but I was wrong. The bond that develops between the two characters as Leo frees Nancy’s hidden spirit for adventure in a sweet and charming way.

Searchlight releases “Good Luck to You, Leo Grande” on Hulu’s streaming platform on 6/17/22.