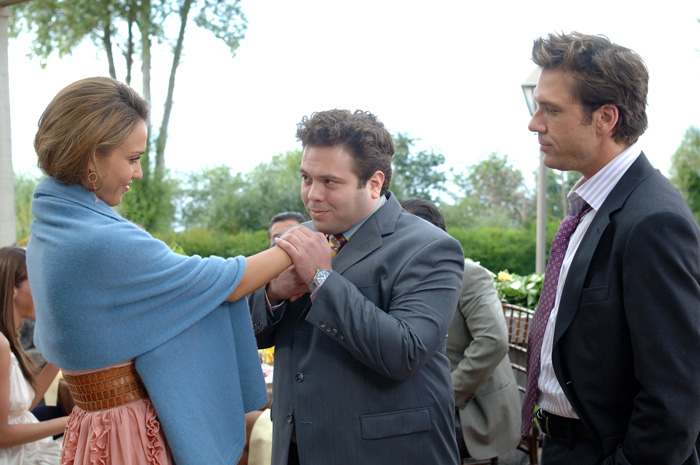 Young Charlie Logan (Connor Price) committed a social faux pas when, during a game of spin the bottle, he refused the advances of a spooky Goth chick (Sasha Pieterse). She puts a hex on him that damns him to never be happy in love, ever. Now, all grown up, Charlie (Dane Cook) encounters beautiful and klutzy Cam (Jessica Alba) and he has to break the curse to finally get the girl in “Good Luck Chuck.”

Charlie has become a prosperous dentist and his best friend since they were kids, Stu (Dan Fogler), is a cosmetic surgeon specializing in breast enlargements (he was always boob obsessed, even as a kid). When they attend the wedding of one of Chuck’s exes, he begins to realize that every girl he ever had a relationship with has found happiness with the next man she met. Then he bumps into Cam and is immediately smitten, but there is the matter of the curse. When word gets out in the single woman community about Charlie’s curse, Stu, the horn dog that he is, is all for his friend using the hex to get laid. Charlie, after Cam refuses to date him, takes Stu’s advice and begins a string of one-night stands with all manner of beautiful women. The numerous affairs, with no hope of a permanent romance, are not satisfying for Charles and he sets his cap to woo Cam. Unfortunately, his desperation causes him to become obsessed with the pretty penguin expert, frightening Cam away. Will reason overcome his obsession? Will Charlie finally find his true love? Do I care? Good Luck Chuck,” by freshman director Mark Helfrich utilizing Josh Stolberg’s script (adapted from a Steve Glenn short story) is a mixed bag of a comedy that combines raunchy behavior and sentimental romance. The gap between these two approaches makes it a disjointed movie that never finds its level. It tries to appeal to both the guy market with Stu’s boob fixation and the montage of Charlie’s sexual encounters and the femmes with its sappy romance. I laughed, at times, at the former and was bored to tears with the latter. Dane Cook, as Charlie, never evokes the sympathy his character should, especially with his silly, over-the-top attempts to convince Cam to be his. Jessica Alba is cute as a button as the clumsy penguin lady but the pratfalls she experiences are far too numerous, causing the slapstick to grow stale. Dan Fogler gets a fair number of laughs for his misogynistic wisecracks but they become out of place when the romance kicks in. Other support is merely background. Good Luck Chuck” may appeal to the tweenie target aud but I just wanted it to end. While only 96 minutes runtime, it felt far longer, prompting me to check the time repeatedly. Not a good thing for a romantic comedy.