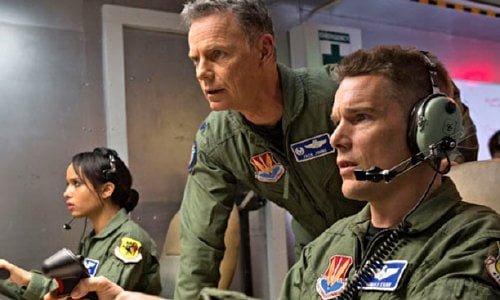 Major Tom Egan (Ethan Hawke) served three tours of duty in Afghanistan flying F-16 fighter jets. But, it is now 2010 and the war on terror takes a very different turn with the introduction of killer drones. Tom finds himself again in the pilot’s seat but he is 7000 miles away from his plane, making surgical air strikes on known terrorists. When the CIA begins calling the drone shots on the ground, he begins to question the ethics of killing the innocent along with the guilty with a “Good Kill.”

Air Force F16 pilot Major Thomas Egan (Ethan Hawke) would rather be flying in Afghanistan than sitting in an air conditioned box on the outskirts of Las Vegas piloting drones in the same air space he served six tours in. His most recent copilot burned out at the age of 24, Tom's paired with Airman Vera Suarez (Zoë Kravitz, "Mad Max: Fury Road"), who is sickened by their orders when they are chosen to act on behalf of the C.I.A. in "Good Kill." Writer/director Andrew Niccol ("Gattaca," "In Time") has fashioned a worthy wake-up call to those still convinced of Obama's 'Hope' brand with his frightening look at 21st century warfare and surveillance technology. But while Hawke and Kravitz ably characterize his moral viewpoint, narrative problems nearly derail the film. It's easy enough for ourselves to note the videogame parallels to drone war, but just in case we don't Niccol draws our attention to this several times, most notably in the orientation speeches given by Egan's boss Lt. Colonel Jack Johns (Bruce Greenwood, "Star Trek Into Darkness") to new recruits, many of whom were approached in arcades. This same problem infects every 'good kill,' where collateral damage, often children, is not only an unimaginable on-the-job stress, but one on which these pilots must make detailed reports (unlike their actual in air counterparts). Egan's team of four is split right down the middle, with himself and Suarez mightily disturbed by what they're called upon to do while Capt. Ed Christie (Dylan Kenin, "Transcendence") and M.I.C. Joseph Zimmer (Jake Abel, "Percy Jackson: Sea of Monsters") are exuberant when a target's hit, noting economic returns on taxpayers' money. This divide feels false, therefore, when all four respond to a rape they witness half a world away much the same way (and when it happens a second time, we just know that rapist has a bullseye on his back). When the C.I.A. assignment lands, Langley (voice of Peter Coyote, "E.T."), as the agency wishes to be referred to, couldn't be more insidiously evil, the job turning into the equivalent of the Milgram experiment, where individuals were instructed to deliver dangerous electric shocks to innocents by authority figures. "Good Kill" works when it focuses on the tolls this new technological warfare takes on Egan and Suarez and how their boss copes by straddling the fence and keeping close watch on his soldiers. Hawke gives a distant performance as befitting his coping mechanism while Kravitz gets teary eyed and sarcastic responding to Langley's disembodied voice. But while Egan's interactions with relative strangers, like a liquor store clerk and local cop, ring true, his more personal relationships are problematic. As his wife Molly, January Jones (AMC's 'Mad Men') is made to fret about the wall he's erected, but only gives up just when she gets what she wants (and even if her back story paints her as a former show girl, just who pours themselves into a tight strapless mini and stilettos for a backyard barbecue?). The film's visuals are its strongest selling point, overhead views of drone kills paralleled with similar shots of the Egan household imparting empathetic vulnerability. The glitz of the Vegas strip is an ironic counterpoint to what goes on a few miles outside of town. Also terrific is Niccol's use of military jargon, some humorous (InI vs. RnR), most devised to whitewash the impact of what's really being said. "Good Kill" has a lot of good elements, but it's also repetitive, narratively bumpy and features a climactic cheat that betrays the skill of its protagonist. Grade:

I believe that this is the first film, in our modern war-on-terror times, that deals with the massive use of such attack drones as the Predator to target and take out identified targets. By moving the pilot to a console, rather than in a cockpit, the danger to the flyer is eliminated. But, a dilemma arises: does the safety of the remote controllers of killer aircraft inure them to the safety of innocents in the kill zone? Tom sorely misses flying his F-16 but his new job ensures that he will see his wife, Molly (January Jones), and their two kids every day instead of being away for tours that last months. At first, piloting drones instead of jets and taking out bad guys is a good and honest mission. That is, until his boss, Col. Jack Johns (Bruce Greenwood), informs his team that they have been loaned out to the CIA. Suddenly they surgical strikes of identified terrorist targets missions are replaced by “signature” strikes based on the target character. What this means to the drone pilots is that innocent women and children would die and that is acceptable collateral damage. This troubles Tom as he sees the CIA tactics puts the US on the same level as the terrorists – innocents do not count when it comes to the mission. “If we stop killing them, will they stop killing us?” asks Col. Johns. But Tom believes that the CIA tactics make him and his team as bad as the terrorists they are hunting, making him question his own government’s deadly policies. Writer-director Andrew Niccol creates an earnest story about the toll modern warfare takes on those called upon to execute morally questionable decisions of their leaders. This is shown through the eyes of Tom Egan as he copes with fact that he is killing those not involved in the war on terror. Simultaneously, his is also dealing with a marriage that is on a rocky road. No wonder Tom starts his day with a slug of vodka. A problem I have with “Good Kill” is that it is relentless with its many drone strikes and strikes on strikes that Tom and his team must perform. There are so many that I started to become as numb to the violence as two of Tom’s team, Joseph Zimmer (Jake Abel) and Roy Carlos (Ryan Montano), who treat their hunting like a video game. (That is another point hammered away by Niccol: the new bread of pilots are not pilots at all, but Game Boys whose actions seem to hold no consequence.) Ethan Hawke does a solid job in playing a man whose conscience struggles with his actions and his family. The family side of his life does not flesh out and his wife Molly’s reaction to her husband’s moral plight is sketchy and not really convincing – no fault to January Jones. Bruce Greenwood is, as always, an asset to the film as the commanding officer who toes the party line but inwardly is sympathetic to his troops. Zoe Kravitz, as Tom’s copilot, Vera Suarez, is a kindred spirit with Tom and she, too, is having a crisis of conscience over her part in killing women and children. “Good Kill” has its heart in the right place in questioning the morality of the indiscriminant use of killer drones. But, hitting me over the head with it over and over again what is right versus what is morally wrong causes the film to loose the edge of its anti-war statement.