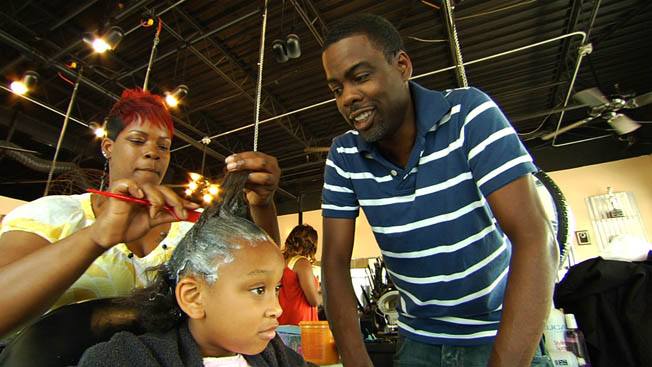 Comedian/actor/"Madagascar's" zebra Chris Rock (acting here as producer/cowriter/host) takes an unexpected journey, both literally and figuratively, into a world which will prove a huge surprise to most outside of the minority that comprises African American women, when he decides to learn just why his five year-old daughter Lola thinks she does not have "Good Hair."

Winner of the special jury prize at 2009's Sundance, "Good Hair" is a surprisingly in-depth documentary in which a niche subject - black women's hair - turns out to touch upon all type of societal issues from self-esteem and ideals of beauty to economics to sexual intimacy. Rock proves an amiable tour guide and jovial interviewer who nonetheless digs deep into his subject, from the circus that is the biannual Bonner Bros. Hair Show held in Atlanta, into the $9 billion dollar hair industry, the mechanics and techniques behind Black hair styles and the age old Venus/Mars debate. According to press notes, Rock was originally intrigued by the idea back when he was touring and a stay in an Atlanta hotel coincided with the hair show, but it lay dormant until his daughter expressed dissatisfaction with her appearance. Rock, along with the production team behind his HBO specials (writer/standup comic Jeff Stilson, making his directorial debut, along with cowriters Lance Crouther and Chuck Sklar), begins at the hair show, sponsored by the largest of the Black owned hair product companies, where four hair stylists will compete for $20,000 in a hair-cutting theatrical extravaganza. Although she is partnered with former winner Kevin Kirk, Tanya is new and practicing her skills cutting hair while hanging upside down! Freddie J is the oldest contestant whose elaborate stunts tend to flop - her last was a video production of "Brokefront Mountain" - this year she plans to cut hair underwater. Jason Griggers is the favorite and also a rarity - a white man who understand black hair, while Derek J is a flamboyant, heel-wearing showman who lost the previous year's contest on nudity and 'too many people on the stage' technicalities. The biggest product being pushed at the show is relaxer, something Rock remembers seeing advertised as a child (old television ads are run), which turns nappy hair straight. It also happens to be a harsh chemical - sodium hydroxide - which can burn a whole through chicken skin in a matter of minutes and eat away a soda can in a few hours. And yet, both men and women subject themselves to the stuff, as well as children as young as three. Sandra 'Pepa' Denton of Salt 'n Peppa reveals that her asynchronous 80's cut was actually the result of burning one side of her hair off. Maya Angelou admits to trying it for the first time at the age of seventy and the Reverend Al Sharpton relates how when James Brown was invited to the Reagan White House to discuss making MLK's birthday a national holiday, he insisted Sharpton style his hair like Brown's. Actress Tracey Thoms ("Rent," "Grindhouse") is unusual because she lets her hair retain its own characteristics. And then their is the weave, popular not only in Hollywood (we hear proponents from Raven-Symoné to Nia Long and Kerry Washington), but with Black women across the country. What may be astounding to most is the time, effort and money that goes into the process. Human hair weaves start at $1,000 - just for the hair piece - and can require upwards of eight hours in a stylist's chair. Then they must be maintained every four to six weeks. And yet women from all economic strata consider them not only desirable, but necessary. Rock discovers that most of this hair comes from India and he travels there to find out that a commodity more precious than gold is given freely by 85% of India's population twice in their lifetimes in a rite called 'tonsuring,' in which the head is shaved bald. As Rock notes, none of these women question what happens to their hair, which is not only immensely profitable but could end up on the head of a Las Vegas stripper. Back at the barbershop, men discuss the issue of touching a Black woman's hair, something most back away from in something like fear. Sexual 'weave' technique is an actual topic of conversation, with one outspoken individual saying he prefers white women because they don't have these issues, ironic given that the Black hairstyles in question are emulating Western European ideals of beauty. Rock fails to ask anyone about the popularity of the Afro during the time of 'Black Power' and why it waned. "Good Hair" starts to get a little repetitious near its end as the 'battle royale' of hair stylists that Rock intrigued us with at doc's beginning turns out to not have all that much to do with everything else we've seen in between. At best, its a showbiz capper to the facts and figures (20% of the U.S. population accounts for 80% of spending on hair products) that have been presented. Still, Paul Marchand has done a terrific job of editing all the pieces into a cohesively flowing narrative and Rock is thoroughly entertaining whether talking business with Korean hair product merchants, Indian hair traders, chemists or the person in the styling chair.