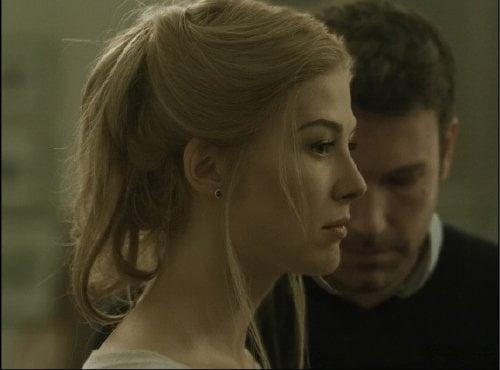 Nick Dunne (Ben Affleck) is summoned home by a neighbor from the bar he owns with his sister, Margo (Carrie Coon). When he arrives, he finds his cat sitting outside and the front door ajar. He calls to his wife, Amy (Rosamund Pike), but gets only silence and finds a smashed table and signs of a struggle. He reports it to the police and the investigation begins to find the “Gone Girl.”

Ah the conundrum of reviewing a film from one of one's most revered filmmakers, David Fincher ("The Social Network"), that is an adaptation of Gillian Flynn's blockbuster best seller "Gone Girl," a book which I didn't admire as much as most appeared to. Fincher, the ultimate craftsman, has pulled off that rarity and made a movie which is actually superior to its source material, but his faithful adaptation (screenwritten by the author) failed to do what some of his prior work has done - knock my socks off. Still there is no denying that the thriller has been elevated, a cubic zirconium so finely made it might fool a jeweler's eye. 2014 is trending towards the year of films in which romantic partners project their own narcissism onto their mates ("The One I Love"), or, as in the case of "The Disappearance of Eleanor Rigby," at least expect similar emotional responses to major life events. In "Gone Girl," Nick (Ben Affleck) and Amy Dunne (Rosamund Pike, "An Education," "The World's End") appear to be the perfect couple until the financial crash of 2008 starts presenting obstacles to their entitled world. Nick's decision to move from New York City to Missouri, for both financial reasons and to care for his cancer-stricken mom, is one that fosters a deep-seated unhappiness in his wife, one which festers and bubbles up in passive aggressive behavior like the anniversary 'treasure hunts' she devises, surface romantic play camouflaging tests of his devotion. But on this, their fifth anniversary, Nick, who's been confiding his own marital dissatisfaction to his twin sister Margo (the marvelous Carrie Coon, HBO's 'The Leftovers,' providing audience point of view), arrives home to find the glass coffee table smashed and his wife gone. He immediately notifies the authorities. Detective Rhonda Boney (Kim Dickens, HBO's 'Treme') arrives with Officer Jim Gilpin (Patrick Fugit, "Almost Famous") and we can see her measuring every piece of information against Nick's responses. She's startled when she learns hours later he hasn't informed his wife's parents yet, just as he's taken aback upon learning a press conference has been set for the next day. Nick's charm works both for and against him, neighborhood wives clucking about offering their support to the handsome husband, but when the media get a hold of a snapped selfie by an aggressive, smiling supporter (Kathleen Rose Perkins, Showtime's 'Episodes'), he's deemed insincere. The arrival of Amy's parents, Rand (David Clennon, "Being There," "J. Edgar") and Marybeth Elliott (Lisa Banes, TV's 'One Life to Live'), adds another minefield to Nick's PR nightmare. Fincher's cast his film beautifully (I had Affleck in my head as I read the book and he proves the perfect choice for Nick), even surprising by getting a fine performance from Tyler Perry as Nick's lawyer Tanner Bolt. Also fine is Missi Pyle as toothy tabloid journalist Ellen Abbott, a Nancy Grace parody which skewers today's media's rush to the shiniest, most ratings worthy viewpoint. Jeff Cronenweth's digital cinematography presents everything with a slightly yellowish/green sickly hue, one which suits the story's nausea-inducing darkness while ironically complementing the chic neutral color palette of the production design, a visualization of Fincher's tone. The score clearly comes from "The Social Network" team of Trent Reznor and Atticus Ross, an underlying aural landscape of ticks, scratches and moans that rolls along like a foggy carpet of building dread. Flynn's adaptation of her own novel rejiggers the timeline, putting the disappearance up front and filling in back story in flash back, but, as in the book, the clear psychopathy of a main character, while less readily apparent in the film, tilts the material towards misogyny. All book to screen adaptations require paring, but the lack of emphasis on the Elliotts' Amazing Amy children's books which both scarred and financially coddled their daughter, lessens our ability to empathize with why her mind works the way it does. We may not like Amy, but the book at least made us understand her better. With "Gone Girl," Fincher has designed a portrait of marriage as psychological warfare where ceasefires masquerade as happiness. It's a brutal extreme, food for thought and an entertaining thriller, but what it is not is even-handed.