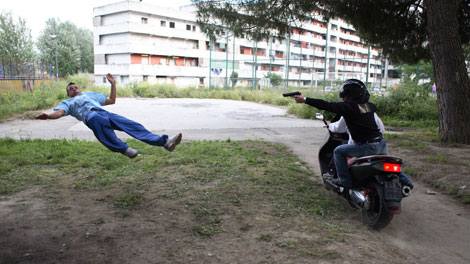 In the Italian province of Naples and Caserta, almost every aspect of day to day life is ruled by the Italian crime syndicate known as the Camorra, a group which recruits the young and allows few to grow old. Author Roberto Saviano has been under police protection since the publication of his book exposing the workings of these criminals whose name Saviano has wittily linked with the Biblical sinful cities destroyed by God, Sodom and "Gomorrah."

Director Matteo Garrone, who used a true life Mafia story and a cold, barracks-like setting for his "The Embalmer," gets a lot more ambitious taking on Saviano's multi-threaded story (adapted by Saviano, Garrone and Maurizio Braucci, Ugo Citi, Gianni Di Gregorio and Massimo Gaudioso). His earlier, carefully built psychological study is replaced here with total immersion, a disorienting effect that gradually comes together for those with the patience to follow five inter-connected story strands and scores of characters. "Gomorrah" is an intellectual, rather than emotional, jolt when one comes to the final realization that the people who live in this area exist in a constant state of fear. The film begins with a multiple hit on some mob bosses enjoying a tanning salon, a bit of abrupt violence that sets the mood albeit none of the characters that will follow. As in "The Embalmer," cinematographer Matto Onorato uses color to great effect here, although the remainder of the film is mostly shot documentary style. Don Ciro (Gianfelice Imparato) quietly goes about his business paying off the families of imprisoned Camorra members, hoping to keep under everyone's radar. One of these is Maria (Maria Nazionale), whose son Simone (Simone Sacchettino) is best friends with thirteen year-old Totò (Salvatore Abruzzese) who also delivers their groceries. But Totò is recruited as a drug mule and a Camorra secessionist divide splits them. (In one horrific scene, we see a form of hazing given the young recruits, who, wearing a vest, must face a bullet shot from point blank range.) Meanwhile, two other young guys, Marco (Marco Macor), and Ciro (Ciro Petrone) (also known as 'Sweet Pea') think they're outlaws when indeed they just appear to be incredibly stupid. Thumbing their noses at the system, they steal a Camorra weapons stash. Young college graduate Roberto (Carmine Paternoster) is promised a terrific position in waste management by Franco (Toni Servillo), only to discover himself coordinating illegal dumping of hazardous waste under Dante Serini (Alfonso Santagata), who lets tweeners drive his trucks when an accident angers the real drivers. (It is said that if the illegal waste dumped in this region by the Camorra, which has caused high levels of cancer, was piled in one place, it would be twice as high as Mount Everest.) In another story, which illustrates the exterior reach of the Camorra, we follow a tailor, Pasquale (Salvatore Cantalupo), who is exploited by his boss Iavarone (Gigio Morra) who makes big bucks knocking off or producing high couture. When Pasquale gets a chance at his own piece of the pie by teaching his skills at a competing Chinese sweatshop, he takes his life in his hands (and has it delivered back to him by someone unexpected in a rare showing of loyalty overcoming profit). We see one of Pasquale's dresses being paraded down the red carpet of the Venice Film Festival by Scarlett Johansson. There are many other threads and power hierarchies threaded throughout, which makes "Gomorrah" at times seem like a Google satellite shot of a province blackened by corruption. But over the course of the film's 135 minutes, Matteo succeeds in plunking his audience within that crater to experience the darkness themselves, and while that experience may often seem like viewing a crowd from a moving merry-go-round, one cannot help but be left with a sense of overwhelming hopelessness. These people live in concrete apartment blocks, complete with dripping water, peering out from behind curtains when gunshots ring through the air. This is a place where a young boy makes his stripes with the most horrific act of treachery, where a faithful middle manager must constantly look over his soldier, where a farmer's gift is known poison to its recipient, where life has little value. Matteo's work has been praised as the most realistic film on the Mafia ever made, and that is likely true, but it is also a cold and hopeless work which doesn't allow us to really connect with any of its characters. But then, that in itself is evocative of life under the Camorra where no one can be trusted.

“Inspired by true events” leads off this based-on-a-real-ripoff story that changes the names, and characters, to fit the story (by Patrick Massett and John Zinman and directed by Stephen Gaghan). That said, “Gold” is a straightforward, rags to riches story about a guy with a dream (literally). Kenny, the scion of a mining commodities broker (Craig T. Nelson), was tops in the firm. The future seemed certain until the company went bust. Seven years later, Kenny is at rock bottom until he has a dream – he sees the wild jungles of Indonesia as the place where he will strike it rich. A meeting with Mike Acosta sets the wheels in motion to make Kenny’s dream a reality. There is more than a nod to “The Wolf of Wall Street,” as Kenny and his current batch of commodities cronies take over their favorite bar as the offices of Washoe Mining and man the phones to sell the company’s stocks. With fantastically optimistic early core results, the stock goes through the roof and Kenny lives the high life with his longtime girlfriend, Kay (Bryce Dallas Howard). Then, the dénouement, and I will leave at that. While watching “Gold,” I felt I had seen the story before. And, I realize that I had, many times and “The Treasure of the Sierra Madre” comes to mind – without Bogey and bandits that “don’t need no stinking badges.” The intrigue is more on the corporate and political level with Kenny simply a pawn in the gold biz. The story is based on a real Indonesian gold scandal in the 1990s and the filmmakers use that framework to surround Kenny’s personal story of ambition and dreams. Matthew McConaughey has done this character before. This time he’s a paunchy, overweight, over-drinking, over-smoking and over-ambitious man with visions of grandeur. For all his pomposity and seeming self-assurance, Kenny is a man of many foibles and McConaughey garners my sympathy and hopes for his success. Edgar Rodriguez is more enigmatic and mysterious (as the story requires) as the purported mining genius. Bryce Dallas Howard, as Kay, conveys her utter loyalty and love for Kenny, even when he screws things up beyond measure. The production moves from corporate board rooms to seedy motels (during Kenny’s bad times) to the humid jungles of Borneo in one man’s quest for that most coveted metal. The hardships of living and working in horrendous heat, constant rain and, for Kenny, malaria are depicted in the near-uninhabitable jungle with suitable ruggedness. The seen-it-before feel of “Gold” keeps it from excelling, but it is a solid telling of man’s overwhelming desire for gold.