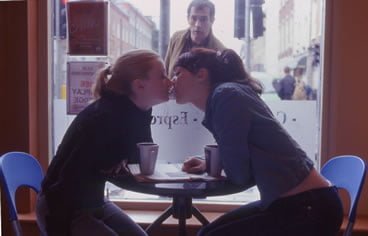 The students and working class, professors and professionals of modern day Dublin all continue to yearn for love even after experiencing broken hearts and bruised egos. As middle-aged literature professor Tom explains to his twenty-something conquests, when it comes to love, humans have a "Goldfish Memory."

Writer/director Liz Gill's feature debut has won many awards, particularly at gay and lesbian themed festivals like Outfest, but as entertaining and beautifully shot as her film is, its audience is likely to experience the goldfish's three second memory of the film once they've left the theater. When she's stood up by her teacher, Clara (Fiona O'Shaughnessy) follows Tom (Sean Campion) only to observe him in the process of coming on to his next victim, Isolde (Fiona Glascott, "Veronica Guerin"). On the rebound, she responds to the lesbian advances of television reporter Angie (Flora Montgomery, "When Brendan Met Trudy"). Angie's celebration of her new love with her commitment-phobic gay best friend Red (Keith McErlean) turns to mournful, drunken cross-boundary sex with him when bisexual Clara admits to also seeing Conzo (Demian McAdam, BBC's "Ballykissangel"). Clara next amuses herself by seducing Isolde and Tom's tomcatting routine suddenly ceases being successful. Luckily he meets a good woman in his own age bracket, but he has trouble committing to Renee (Jean Butler of the original "Riverdance"). After Angie tentatively thinks she's found the real thing with Kate (Justine Mitchell), she discovers to her horror that her one-off with Red has left her pregnant. Meanwhile Red becomes infatuated with bartender David (Peter Gaynor), whose girlfriend Rosie (Lise Hearns) reacts badly to being dumped for a man by getting too quickly engaged to marry Larry (Stuart Graham). Sitting on the sidelines is Rosie's best friend Helen (Aisling O'Neill, "Agnes Browne"), a happily single woman content with commenting on all the action. Gill's screenplay doesn't cover any new territory, but does keep us involved with her contemporary characters. Best of the cast is Montgomery, whose clear-eyed romantic experiences the deepest hurts and greatest joys. Gill should be commended for believably rehabilitating Tom from a shallow skirt chaser to a sympathetic loneyheart, but not all of her characters fare as well. The film's biggest detriment is the selfish Clara, played by O'Shaughnessy with too much actressy self-absorption. Rosie is also unlikable, shedding the sympathetic mantle of wounded party only to emerge bossy cheat. McErlean gives a brightly comedic performance as the cockily confident bicycle messenger who must step back to try on the role of fatherhood. In a small part, McAdam makes his mark, particularly with his lusty, frat-boy response to Carla's lesbian experimentation which he amusingly tries to sell as open-mindedness. Jean Butler makes her Renee the film's touchstone of mature relationships. Gill's most noteworthy achievement is in her portrayal of Dublin as a bright and airy contemporary city (although from Gill's perspective one would believe populated largely with non-heterosexuals). Cinematographer Ken Byrne, shooting in DVCAM, achieves some stunning, watery imagery using natural light. Shots of a Dublin bus against a turquoise dusk and a library rotunda as bright as a fishbowl are simply gorgeous. A notable soundtrack includes the interesting choices of Bossa Nova numbers. "Goldfish Memory" is an old look at love against a vibrantly new look at its Dublin backdrop.