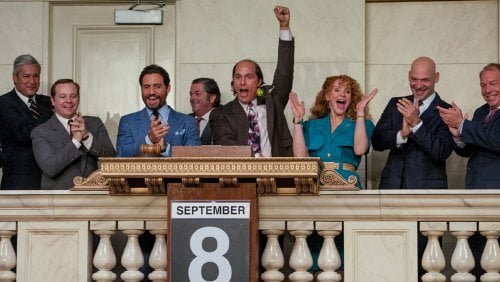 Kenny Wells (Matthew McConaughey) has a passion for gold that knows no bounds. In a dream, he saw his destiny lie in the remote jungles of Indonesia and stakes everything he has to search for, with the help of renegade miner Mike Acosta (Edgar Ramirez), and strike the golden mother lode of the decade in “Gold.”

“Inspired by true events” leads off this based-on-a-real-ripoff story that changes the names, and characters, to fit the story (by Patrick Massett and John Zinman and directed by Stephen Gaghan). That said, “Gold” is a straightforward, rags to riches story about a guy with a dream (literally). Kenny, the scion of a mining commodities broker (Craig T. Nelson), was tops in the firm. The future seemed certain until the company went bust. Seven years later, Kenny is at rock bottom until he has a dream – he sees the wild jungles of Indonesia as the place where he will strike it rich. A meeting with Mike Acosta sets the wheels in motion to make Kenny’s dream a reality. There is more than a nod to “The Wolf of Wall Street,” as Kenny and his current batch of commodities cronies take over their favorite bar as the offices of Washoe Mining and man the phones to sell the company’s stocks. With fantastically optimistic early core results, the stock goes through the roof and Kenny lives the high life with his longtime girlfriend, Kay (Bryce Dallas Howard). Then, the dénouement, and I will leave at that. While watching “Gold,” I felt I had seen the story before. And, I realize that I had, many times and “The Treasure of the Sierra Madre” comes to mind – without Bogey and bandits that “don’t need no stinking badges.” The intrigue is more on the corporate and political level with Kenny simply a pawn in the gold biz. The story is based on a real Indonesian gold scandal in the 1990s and the filmmakers use that framework to surround Kenny’s personal story of ambition and dreams. Matthew McConaughey has done this character before. This time he’s a paunchy, overweight, over-drinking, over-smoking and over-ambitious man with visions of grandeur. For all his pomposity and seeming self-assurance, Kenny is a man of many foibles and McConaughey garners my sympathy and hopes for his success. Edgar Rodriguez is more enigmatic and mysterious (as the story requires) as the purported mining genius. Bryce Dallas Howard, as Kay, conveys her utter loyalty and love for Kenny, even when he screws things up beyond measure. The production moves from corporate board rooms to seedy motels (during Kenny’s bad times) to the humid jungles of Borneo in one man’s quest for that most coveted metal. The hardships of living and working in horrendous heat, constant rain and, for Kenny, malaria are depicted in the near-uninhabitable jungle with suitable ruggedness. The seen-it-before feel of “Gold” keeps it from excelling, but it is a solid telling of man’s overwhelming desire for gold.