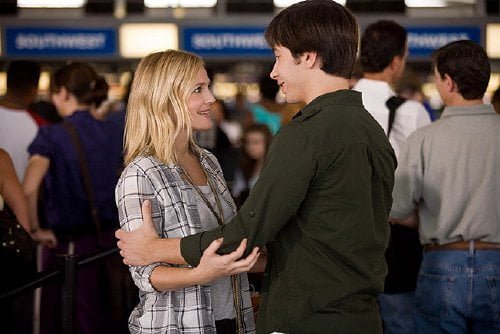 After getting dumped by long time girlfriend Amy (Leighton Meester, "Date Night") for taking her birthday wishes literally, Garrett (Justin Long) goes to drown his sorrows with roommate Dan (Charlie Day, TV's "It's Always Sunny in Philadelphia") and buddy Box (SNL's Jason Sudeikis, "The Bounty Hunter"). He interrupts the Centipede game of Erin (Drew Barrymore), then is horrified to learn that she is the mysterious ERL, the game's high scorer. This most unlikely of meetings turns out to be the beginning of a beautiful friendship except for one thing - Erin's about to move from NYC to the West Coast in pursuit of her Master's Degree. After six blissful weeks together, Garrett and Erin decide their relationship is worth "Going the Distance."

In her fiction feature debut, director Nanette Burstein ("The Kid Stays in the Picture," "American Teen"), working from a first published script by Geoff LaTulippe, gives a female perspective on the Apatow brand of comedy - it's sweet and it's raunchy but the women provide much of the raunch so it's toned down a bit, still utterly hilarious but never scatalogical. On again, off again, on again real life couple Long and Barrymore have what so many real life couples lack on screen - real chemistry - a palpable connection of the best friends turned lovers kind (in other words, the best kind). After the meet cute and some 'getting to know you' team barroom trivia, Erin falls into Garrett's bed the same night he was dumped. In an amusing running gag, she not only finds out he's a big "Top Gun" fan, but that the wall's in his apartment are so thin, Dan can 'particpate' in his dates (at just the right moment, music is cued for them). A montage cued to "Just Like Heaven" brings us up to the harsh reality of Erin's departure date. After trying to act 'like adults' and end the relationship, they find they cannot let go. But today's economy makes the long distance romance even more difficult. The filmmakers have wisely put their protagonists in endangered job fields - she's trying to get into journalism after interning at a big NYC paper that's laying people off, he's a talent scout for a record company - so that it's not just a matter of one picking up and moving. Then there is the added resonance of Erin's interrupted career timeline because of the former boyfriend she once moved for. Erin's moved in with older sister Corinne (Christina Applegate) and Corrine is like a mama bear when it comes to her sister's welfare. Garrett has the deck stacked against him even before he makes a surprise appearance and the lovers are caught by Corrine and her husband Phil (Jim Gaffigan, "17 Again," "Away We Go") going at it on their dining room table. Both Garrett and Erin, therefore, have their same sex sounding boards, but to add tension, both have sexy colleagues of the opposite sex. As the two try everything to keep the relationship afloat (Christmas via Skype, force phone sex), each cannot help wondering if the other has remained faithful. A decision is tested in the most sensible way before a heartily satisfying and totally realistic conclusion is reached. Barrymore is one of those likable actresses who can even escape bad films unscathed and her appeal here is unmatched, evidenced by her ability to spout raunch and red wine while remaining adorable. It's also refreshing to see an actress in a morning after scene actually looking like the morning after. Long's sex appeal comes from his boy next door looks and genuine sense of humor and inquisitiveness. They're wonderful together. Applegate is tartly funny as the protective sister while Day and Sudeikis are true 'guy' friends with disgusting eating habits and real loyalty. Ron Livingston ("Office Space") does little with his role as Garrett's boss, much as was the case in his recent "Dinner for Schmucks" outing, but Matt Servitto (HBO's "The Sopranos," "Big Fan") makes comic timing an art form as Erin's NYC chief. Kristen Schaal (HBO's "Flight of the Conchords"), who is the flavor du jour for an almost expected cameo/role in every comedy coming down the pipeline, at least has an opportunity to be funny here, a prerequisite many of her recent directors seem to have overlooked. Given the genre, music is an important component heightened here by the nature of Garrett's job and The Boxer Rebellion is this film's 'house band,' a very good one in a film hip enough to poke a jab at the "Garden State" soundtrack. It is a well known fact that the romantic comedy genre has been in the dumps lately and despite the fact that "Going the Distance" would work even in the best of times right now it's simply the best romantic comedy of the year so far. It's adorable, of its time and laugh out loud funny.

Everyone knows that long distance relationships never work out. But, when newspaper reporter intern Erin (Drew Barrymore) meets record company exec Garrett (Justin Long) in New York, it is love at first sight. Their romance blossoms but must come to an end when her internship ends and Erin must return to San Francisco. As they are about to part forever, they reach the conclusion that their love is so strong it can take the rigors of “Going the Distance.” How can you not like a romantic comedy that has Drew Barrymore cursing like a stevedore, bawdy but intelligent humor, a likable cast and a fine, funny script that uses its ribaldry to make this more than a tweeny flick. This is for mature audiences that appreciate a good, well-written, well-acted comedy that does not go for the cheap life. Well, the previously mentioned Drew with potty mouth catches you unawares, but, because of her, the scenes are positively charming. Of course, the real life romance (rocky at times) between Long and Barrymore lends to the chemistry between their characters, making theirs a believable shot at making a long distance life work. The happy ending is nice, too. “Going the Distance” is not just about its stars, though. The supporting ensemble cast brings a great deal of humor and charm to their characters, making them interesting to watch in their own right. Christina Applegate has fun as Erin’s wise, protective and caustically witty sister Corinne. Jason Sudekis and Charlie Day are a riot as Garrett’s best buds. Sudekis represents the voice of reason as Box, warning that a long distance romance is impossible to sustain and is amusing doing so. Day steals the show as Garrett’s eavesdropping goofy roommate, Dan, who, through the paper thin walls of the apartment, plays the appropriate mood music whenever Erin and Garrett try to have a romantic private moment. The gag is used several times and it works every one. “Going the Distance” is available on DVD and Blu-Ray, in one package, a good idea as technology transits from DVD to high-definition video. While the DVD contains the movie, only, the Blu-Ray disk is loaded with extras - a featurette on long distance dating, director Nanette Burstein’s narration over the film, a music video, deleted scenes and more.The combination of a very funny and a little bit raunchy rom-com with the plethora of extras make the package a must to rent or buy.