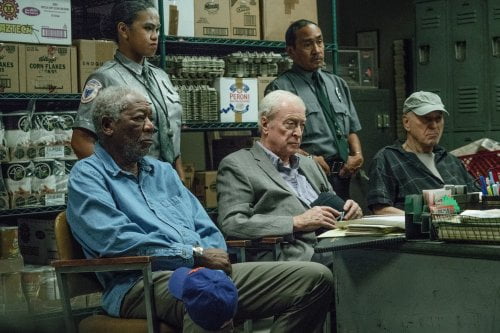 Best friends for forty years, former steel workers Joe (Michael Caine), Willie (Morgan Freeman) and Albert (Alan Arkin) enjoy their retirement until their pensions are eaten by Wall Street finagling. With bills looming, the three risk everything to steal back what is theirs. If they're gonna go, they're "Going In Style."

"Hidden Figures" screenwriter Theodore Melfi has done more than update the 1979 original film of three old guys robbing a bank. He and director Zach Braff ("Wish I Was Here") have turned the gritty, subversive amateur antics of George Burns, Art Carney and Lee Strasberg into sunnier, slicker commercial fare. The surprising thing is that it works as well as it does, but it is unlikely to be remembered the way the earlier film has been. Martin Brest's original was a comedy tempered by the sad realities of mortality in which three senior roommates got a boost in their waning years by pulling off the seemingly impossible with little in the way of planning. The new film is fueled by economic outrage as the three men find their pensions wiped out by a merger. Joe, who's recently taken in his daughter and granddaughter Brooklyn (Joey King, "Wish I Was Here") after his daughter's divorce, faces additional hardship when his teaser rate mortgage triples overnight. While Joe is meeting with his unscrupulous loan officer (Josh Pais), the bank is robbed, but he is left with his wallet by a masked thief who tells him that it is 'a society's duty to take care of its elderly.' This gives Joe an idea. Willie, who we know (but his friends do not) is on the verge of kidney failure if he doesn't get a transplant, is all in, but Al's more reluctant. The three first attempt petty thievery in the form of shoplifting at the local Value Town. While Al is trying to extricate himself from clerk Annie's (Ann-Margret) blatant flirtation, Joe's attempt to steal a ham raises suspicion. After a getaway attempt, the three end up being castigated by the store manager (Kenan Thompson) who notes of Willie's exploits stuffing a pork loin down his pants 'It had to be the brother.' They're let off with a slap on the wrist. Realizing they'll need professional help to pull off the bigger heist, Joe contacts his ex son-in-law Murphy (Peter Serafinowicz, "Spy"), thinking his medical marijuana business means links to a criminal underworld. Murphy puts them in touch with Jesus (John Ortiz, "Kong: Skull Island") who operates under the cover of a pet shop. He informs them they'll need to have alibis, so the threesome cook up an elaborate plot that will place them at their Knights of the Hudson charity carnival during the hour they rob Williamsburg Savings Bank. Willie's collapse during the robbery gives little Lucy (Anabelle Chow) a look at his distinctive wristwatch (its face is a picture of his granddaughter) and security cameras a partial glimpse of his face. Detective Hamer (Matt Dillon), who interviewed Joe after the first robbery, begins connecting dots and orders a wheelchair lineup. Caine, Freeman and Arkin seem to be having a ball and their fun is infectious, but the film leans too heavily on such tropes as deriving comedy from old people doing 'age inappropriate' things like smoking pot or having sex. Throw puppies and a Beyonce-inspired pudgy boy dancer into the mix to up the cute ante. If the first film required a box of tissues, this one's more aptly paired with a whoopie cushion. (The novelty Groucho glasses disguises of the first film have been replaced with Rat Pack masks so inept, the filmmakers felt the need to have them explained, not once, but twice.) Christopher Lloyd's also on board as addled Hudson Knight Milton while character actress Siobhan Fallon ("We Need to Talk About Kevin") is the trio's charmingly gruff diner waitress. Yet for all Melfi's updates, he's failed to fix the one flaw of the 1979 film - the money trail that leads back to the perpetrators. Maybe that was intentional, as a miscalculation on Willie's part hints that they might be back. Grade: