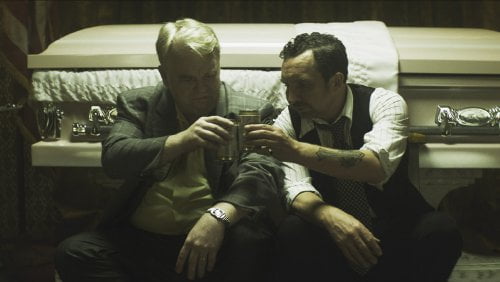 When Mickey Scarpato’s (Philip Seymour Hoffman) ne’re-do-well stepson Leon (Caleb Landry Jones) dies in a construction site “accident,” he just wants to bury the problem child and get on with life. But, the boy’s mother, Jeanie (Christina Hendricks), demands that he find out the truth about her son, even though no one else cares in the neighborhood called “God’s Pocket.”

When her son's killed in a construction accident, Jeanie Scarpato (Christina Hendricks, TV's 'Mad Men') thinks there's more to the story than what she's been told. As her husband Mickey (Philip Seymour Hoffman) tries to come up with funeral costs by selling beef carcasses from his latest truck heist and betting on the horse he's sure will win, Jeanie tries to get answers from the local reporter, Richard Shellburn (Richard Jenkins, "The Cabin in the Woods"), who's celebrated for knowing everything about their insular South Philly neighborhood, "God's Pocket." Cowriter (with Alex Metcalf)/director John Slattery has been sure-footed stepping behind the camera of his TV series 'Mad Men,' but he's on shaky ground with his feature film debut. Having assembled a stellar cast (including the late Seymour Hoffman in his second to last role), Slattery does a great job giving them an authentic blue collar neighborhood, but the characters who inhabit it don't always make sense. It's a bit of a stretch pairing his 'Mad Men' costar Hendricks as the wife of Philip Seymour Hoffman, and even more of a stretch believing that she'd allow herself to be seduced by the odious Shelburn, who actually asks her at one point if she can deal being around his 'celebrity.' Hendricks never lets us inside Jeanie's numbed head and We're never given any idea why Jeanie believes Leon's (Caleb Landry Jones, "Antiviral") death is suspicious. As his degenerate alcoholic journalist, Jenkins is made to utter purple prose that makes the film seem like a parody of itself. The film's comedy is ably handled by Hoffman and Turturro as his best buddy Arthur, who wants to take his Aunt Sophie (Joyce Van Patten, "Grown Ups") to Florida because 'she wants to live in one of them trailer parks with her friends and grow sh&t in the yard.' Arthur is the voice of reason to Mickey's rash ideas, especially when he has forebodings about Turning Leaf, the horse Mickey thinks is undervalued because of a rare instance of vaginal gas in her last race. But when Mickey loses the money raised by Hollywood Bar regulars, it's a stretch to believe funeral director Smilin' Jack Moran (Eddie Marsan, "Happy-Go-Lucky") would react in such a way as to punt Mickey into "Weekend at Bernie's" territory and Slattery's cross cutting of Mickey's fall with his wife's assignation makes little sense. Speaking of the Hollywood Bar, a whole movie could be set in this place, thanks to a great performance from Peter Gerety ("Flight") as its highly moral, sympathetic bartender. The largely middle aged female regulars at this place are a hoot, but Shelburn's appearance there in the film's final minutes seems like an act of self delusion given the circumstances. The film has individual scenes that work (a drunk Mickey's 'welcome' by a sister-in-law (Molly Price) sleeping on his couch is a classic), but it's tonally all over the place - social drama (the truth behind Leon's death) followed by slapstick followed by bursts of extreme violence (a flinch-inducing eye-gouging scene). Slattery also falls into the multiple ending pit. "God's Pocket" is noteworthy only as a means to cherish one of the last performances of the great Hoffman. It has a few laughs, but it's all over the map.

Actor John Slattery (TV’s “Mad Men”) makes his feature film debut behind the camera with a script by the novice director and co-scribe Alex Metcalf adapted from the novel by Peter Dexter. He brings together a veteran cast – which includes the late Philip Seymour Hoffman, Eddie Marsan, John Turturro and “Mad Men” alum Christina Hendricks – and delves into the lives of the denizen’s of tightly knit ‘hood of God’s Pocket. The story has a lot of the feel of Hitchcock’s “The Trouble with Harry” where a corpse proves problematic for the inhabitants of a small town. “God’s Pocket” is set in the big city and the problem becomes Leon’s body when Mickey, because of a very bad bet, cannot pay for the funeral. This brings on the farce that makes up much of the story that tries to do too many things. There is also a problem with casting curvaceous, va-va-voom Christina Hendricks as Mickey’s hausfrau, Jeanie. I never got a connection between them. Caleb Landry Jones, as the despicable Leon, is truly someone only a mother could love and that is much of the premise of the film. There are a bunch of other story threads – too many I think – that are followed to varying degrees of success in their telling. Sometimes “God’s Pocket” is funny, sometimes serious and always uneven in its balance of the two.