God Grew Tired of Us 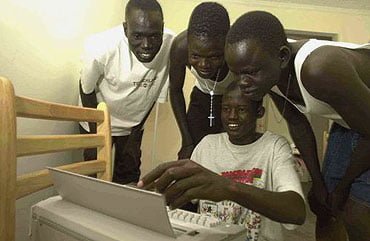 During the horrific civil war which gripped Sudan for twenty years, thirty-seven thousand young boys walked a thousand miles to an Ethiopian refuge camp where they were suspended for three years until war in the host country forced another march to Kenya. With their numbers having dwindled to twelve thousand, one of the survivors comes to the conclusion that "God Grew Tired of Us."

This 2006 Sundance documentary and audience award winner is a slicker, more upbeat, celebrity driven telling of the same story presented in Megan Mylan and Jon Shenk's 2004 "Lost Boys of Sudan," and yet this is a subject worthy of multiple films even though they follow a very similar template. Both films begin with the boy's history in their own country and African camps, progress to the program which brought thousands of them to the United States and proceed to personal journeys in a new land. The 2004 film followed two boys, one who would adapt to a new life in the United States and one who would struggle. It was a bleaker look at its subject which balanced the boys' successes against many of those who were lost once more. In this new take, directors Christopher Dillon Quinn and Tommy Walker focus on three men - John Dau, Daniel Abul Pach and Panther Bior - all of whom eventually find a place in their new home and discover surviving family members besides. The second film as the advantage of celebrity producers (Brad Pitt, Catherine Keener and Dermot Mulroney) and glamorous narrator Nicole Kidman. The first two segments of both films are virtually identical, especially the almost comical fish out of water midpoint that shows the boys learning about electricity, modern bathrooms and supermarkets. Upon arrival in the West, one young man gives a bad review to airline food, a familiar sentiment followed by the surprising revelation of how they actually ate the unfamiliar food - pats of butter and packets of condiments all equal to the main course. Once landed in various cities in the U.S., the boys are subsidized for three months before they must both earn their own keep and pay back the U.S. Government for their airfare. They also begin to learn about racism. In Syracuse, John is driven to a factory job where he must wait two hours before the doors open. After that he has a second job at MacDonalds. Then he discovers his mother and sisters have survived and works continuously to send them money which he is never sure is getting into their hands. John becomes a crusader, spreading the word about the Lost Boys and eventually gets his mother to America, but in so doing he must sacrifice the American Dream of an education. In Pittsburgh, Daniel gets that education, yet decides to return to Sudan with it in order to collect the woman he is betrothed to. Yet while these young men face certain disappointments, we hear nothing of those who adapt to a different kind of Black American experience, the kind not driven by Church but by gang violence and drugs nor do we hear about the boys who fail to grapple with the economics of their new situation. "God Grew Tired of Us" features better production values than its predecessor, particularly in the beauty of its images, but even though it is not as evenly balanced a portrait, it serves as a necessary reminder of these young men's travails.

As the 20th Century drew to a close, the African country of Sudan was ripped apart by political unrest and unimaginable violence that forced thousands to flee to Ethiopia, then Kenya, to try to find a new life. Three young men, refugees of their nation’s chaos, are given the chance to find this new existence when they are allowed to settle in the United States. Documentary filmmaker Christopher Quinn follows these three as they attempt to rebuild their lives, live the American Way and, eventually, quest to find the friends and family they had to leave behind in “God Grew Tired of Us.” If you are a fan of documentary films, you’ll probably recognize that this story of Sudanese refugees coming to America has been done before (and better, in my opinion) with the 2003 doc, “The Lost Boys of Sudan.” That film made the unconventional move to tell its story without benefit of voice over narration and the result was a compelling tale of a clash of cultures for its subjects. “God Grew Tired of Us” follows a road more traveled as it tells, essentially, the same story as “Lost Boys.” The difference is that the new film benefits from the support (and funding) by such movie star notables as Brad Pitt, Dermot Mulroney, Catherine Keener and Nicole Kidman, who narrates the film. Repeating the content of “The Lost Boys of Sudan,” God…” doesn’t really cover any new ground and we see its subjects trying to adapt to their life in America, our culture, food and mores. It does provide an additional phase, though, as its three young men decide to try to find the loved ones they have been separated from for years. I appreciate writer/director Quinn’s four year effort in telling their story, making this a decent companion piece to the 2003 doc.