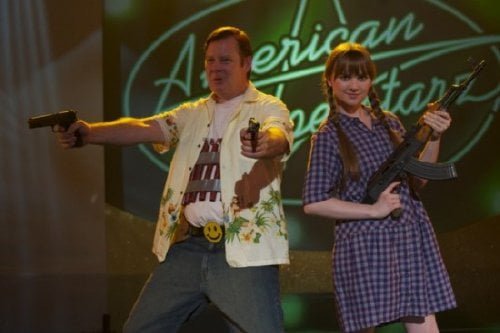 Frank (Joel Murray, AMC's 'Mad Men,' SHOtime's 'Shameless') is a divorced father-of-one who is sick to death of his coworkers' obsessions with celebrity and the lack of love or respect shown him by his spoiled daughter Ava (Mackenzie Brooke Smith). When he's fired for a misinterpreted kindness and then gets an inoperable brain tumor diagnosis, he heads out on the road to make a statement before ending his life. But he finds a soulmate in fifteen year-old Roxy (Tara Lynne Barr) and the two become spree killers with a distinct agenda in "God Bless America."

Writer/director Bobcat Goldthwait ("Sleeping Dogs Lie," "World's Greatest Dad") continues the themes about changing social mores creating entitlement, a lack of empathy and celebrity worship that he explored in a smaller, more personal story with his last, "World's Greatest Dad," as he continues to develop as a filmmaker. Visually his latest still isn't terribly imaginative with locations that announce a low budget and he hasn't ironed out the finer points of his idea, but he has gotten his best performances to date with great chemistry between leads from very skewed demographics. This is a filmmaker unafraid to say what others are thinking (and I kept thinking about how soon his latest satire will be used as an excuse for the deranged acts of some sociopathic nut). Anyone who has ever felt their blood pressure rise at the thoughtlessness of other human beings, at the money 'earned' by the Jersey Shore morons or the celebrity gossip that passes for news in the U.S. while international issues are shunted aside will get a chortle out of Frank and Roxy's crime spree. "God Bless" begins as beleaguered Frank gives us an inner monologue on the thoughtlessness of his neighbors (whose squalling infant and Michael Jackson apologist commentary we can hear through his wall) as appalling images from reality TV shows march across his screen, including the William Hungesque Steve Clark (Aris Alvarado) butchering the theme from "Mahogany" on American Superstarz. Frank drifts into a fantasy in which he goes next door and blows his neighbors away, baby included. Goldthwait has no sacred cows. Frank meets Roxy while he's staked out watching Chloe, a reality 'star' worshipped by her peers for her looks who spends her entire life preparing for her sixteenth birthday party and swearing at her parents for ruining her life because the new car she's been gifted with isn't the Escalade she wanted. Roxy misunderstands Frank's intent at first, but when she realizes he's taken the girl out (unsettling in that Frank's own daughter is just a younger version), she's ecstatic. Roxy convinces Frank that if he takes his own life, Chloe will become the martyr of a perverted gunman. He reluctantly agrees to take her along after hearing her own sordid story. Next lethal confrontation - obnoxious movie theater patrons (yeah!). But while it's fun to indulge in some over-the-top vicarious thrills, Goldthwait hasn't figured out how to separate the wheat from the chaff, and so our enjoyment is blunted when the collateral damage begins to add up. If he intended a double edged critique a la Alexander Payne's "Citizen Ruth," he's failed. But if he cannot keep Frank's mission pure, at least he's kept Frank's relationship with a minor on an even keel. In fact, this is one of the more satisfying aspects of the film and the sexualization of young girls is another of Frank's hot buttons. Murray's sad sacked decency and Barr's profane enthusiasm ricochet off each other in delightful and complex ways and their performances may be the filmmaker's greatest achievement here as he writes his amusing idea into a corner. "God Bless America" will not be appreciated by Tea Partyers, American Idol judges or the vacuous (and many more), but it's a thought provoking comedy that could substitute as an al-Qaeda training film.

Comedian, comic actor and filmmaker Bobcat Goldthwait has only directed a handful of films over the past 20 years, starting with his dark comedy debut, “Shakes the Clown.” With “God Bless America, “ he maintains that comic darkness with his story of a middle aged Frank (Joel Murray), a man overloaded with reality TV, hate-mongering talk shows and the whole American obsession with entitlement. Bad news from his doctor – he tells Frank that he has a fatal brain tumor then takes a call from his car dealer – pushes him over the edge. A film about spree killing should be sobering material. But, in the hands of Goldthwait and with the breakthrough performances by Joel Murray and Tara Lynne Barr, as teenage Roxy who joins Frank on his murder spree, the result is black comedy at its best. This middle-age-man/teenage-girl partners-in-crime tale could have had a weird creepiness but the possible sexual overtones are not delved into and Frank and Roxy are really just kindred spirits. Goldthwait walks several lines like this and never goes over the edge in bad taste. (Yes, I know that some might call a movie about a pair of spree killers in “bad taste.”) The violence is abrupt, bloody and…funny. I found myself laughing out loud (not something I usually do watching American movie comedies) frequently, enjoying the black comedy from start to finish. The chemistry between Murray and Barr is terrific and droll hangdog Frank is complimented by the perkiness of Roxy.