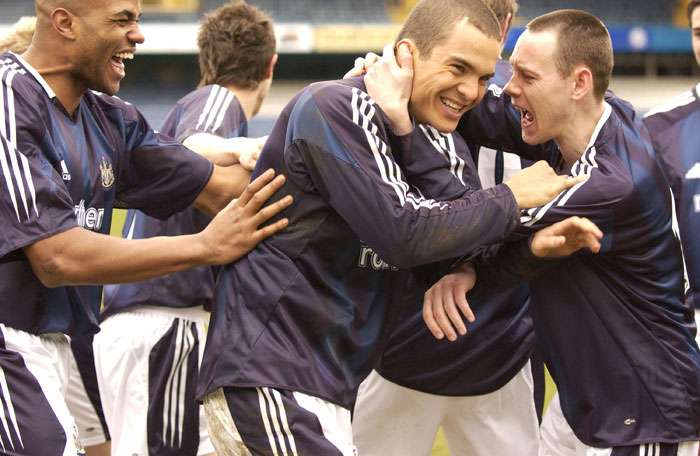 Santiago Munez (Kuno Becker, "Lucía, Lucía") has been a soccer freak all his life. One of his strongest childhood memories is of his father (Tony Plana) screaming at him to leave the ball that escaped from his hands as they were entering the U.S. illegally. Now that he's grown his dad believes he should be completely satisfied with taking over the successful family landscaping business, but soccer is still Santy's passion and when a visiting Scottish scout gets Santy a trial with Newcastle United, Santy believes he can achieve his "Goal! The Dream Begins."

In soccer mad Britain, "Goal!'s" subject matter paired with a slew of cameoing star players have turned this cliche sodden sports flick into enough of a hit to have spawned not only a sequel, but a franchise. Despite the fact that its hero is an illegal alien from Los Angeles, Buena Vista's U.S. release of this film must be perfunctory at best as "Goal!" looks to shoot through theaters faster than a David Beckham free kick. Director Nicky Cannon ("I Still Know What You Did Last Summer") certainly gives the impression of a man who believes he's making an enduring film and "Goal!" is not without its charms beginning with star Kuno Becker. But this is the type of film that serves up a fake-out in its first minutes that is so transparent its sincerity is almost embarrassing. Hernan Munez is so convinced of his family's place in the world that he steals the $1200 his son had saved for a plane ticket to buy a used truck for the business. Understanding grandma (Miriam Colon, "All the Pretty Horses") hocks a few heirlooms and sends Santy on his way, ensuring a father/son rift for some emotional heft. Santy arrives in Newcastle to discover that his scout, Glen Foy, is an auto mechanic, but Glen proves good on his word. Santy has a tough time of it though, not used to playing in northern Newcastle's harsh weather conditions and Glen's buddy Mal Braithwaite (Gary Lewis, "Joyeux Noël"), the team's coach, must deliver bad news. Thankfully, though, as if we haven't seen every twist and turn in "Goal!" a hundred times before in other movies, "Goal!" itself is pleased to repeat things two or three times for our benefit. Santy doesn't just get one chance, he gets two! And when he fails a second time, he gets yet another. Santy gets pulled from the farm team to play in a globally televised game his dad sees in secret at an L.A. bar. Then he gets to play again in Newcastle's most crucial game of the season and grandma finds the same watering spot. Team owner Erik Dornhelm (Marcel Iures, "Layer Cake") can be relied upon to walk long distances in vast spaces to converse with his lowliest player, always practicing by himself long after others have gone home. In fact, Newcastle United's entire management structure revolves around Santiago Munez. "Goal! The Dream Begins" is made bearable by its truly likable cast, villainous Plana excepted. Kuno Becker is a cutie shot through with humility and honor and Dillane is an equally down to earth partner, a former player with just enough influence and more than enough belief to propel his protege to glory. Alessandro Nivola ("Junebug") is perfection as the hot shot bad boy player who still has a core of decency and Lewis is a warm fatherly figure as the team's coach. Sean Pertwee ("Event Horizon," "Dog Soldiers") counterpoints as the high living, fast tracking agent Barry Rankin while Iures walks right down the middle, a tough businessman, but a businessman with tough love for what he does. "Goal! The Dream Begins" isn't a bad film, but the schoolgirls and culture clashes of "Bend It Like Beckham" made for a far, far better one.

Santiago Munez (Kuno Becker) is passionate about one thing: soccer. He is the star player for a local Los Angeles amateur team and that seems to be about as far as he will go. That is until, during a game, he comes under the notice of Glen Foy (Stephen Dillane), a former soccer star and scout in town visiting his daughter. Foy is so impressed by the young man’s natural ability he promises to get Santiago a tryout in England with the Newcastle Union professional soccer team in “Goal! The Dream Begins.” This predictable rags to riches story claims to be the first sports film to feature soccer as the game of choice. (I would argue that “Bend It Like Beckham” meets the criteria as “first” soccer film – we won’t even discuss “Ladybugs.) “Goal!” is a routine sports flick that rolls along without surprise to its expected feel good finale. When Santiago receives the offer to try out for Newcastle United he is thrilled by the prospect. But, not so his hard-working gardener father, Hernan (Tony Plana), who wants the lad to stay and work in the family business. Santiago has been saving his meager wages for just such an opportunity but is shocked, when he goes to his stash, to find it gone. Hernan, it turns out, took his savings to buy a new truck for the business. Despondent over the turn or events, Santiago sees his dream vanishing before his eyes. That is, until his grandmother (Miriam Colon) presents him with a bus ticket to Mexico (since he is an illegal immigrant he can’t leave for England directly from the US), and an airline ticket to London. Without a word to his father, Santiago heads off to find his destiny. On arrival, he seeks out Foy who takes the young man under his wing. The difference between the sunny, dry weather of LA and the dank wetness of Newcastle proves to be problematic for Santiago and his debut tryout is far less than stellar. Just when it looks like he will have to pack up and head back home, Glen intervenes again and Santiago gets a second (and, later, a third) chance to show his stuff. You can guess what happens. Former commercial/video director, Danny Cannon (“Judge Dredd”), takes the screenplay-by-committee (Dick Clement, Ian La Frenais, Mike Jeffries and Adrian Butchart) and does a solid, if extremely predictable, job of telling Santiago’s success story. But, even though the star is surrounded by exciting soccer action and cameo appearances by such sport notables as the legendary David Beckham, Kuno Becker lacks the screen chemistry to hold your attention. In fact, Becker is overshadowed by those supporting him. Stephen Dillane has fine presence as Glen Foy, displaying compassion and understanding for his new ward. Anna Friel, as the team nurse, Roz, plays the love interest of Santiago, breaking her self-imposed rule to never date players. Romanian actor Marcel Iures is dignified and tough-but-fare as the head coach for Newcastle. Alessandro Nivola is stereotypical as the team star that steeps himself in the success and riches of his fame. Kieran O’Brian makes the most out of his small role as end-of-career soccer pro, Hughie Magowan, who tests Santiago every step of the way until he proves his ability on the field. The soccer action is well handled by Cannon and his crew as the production uses actual Newcastle Union games to give the play a realistic look and feel. The games, shot by Michael Barrett with seven cameras capturing the action, are fast-paced and varied. Use of the Union stadium, weight and training rooms helps make the film look real. Goal! The Dream Begins” (the title makes one think that a sequel is pondered) is well produced and crafted but shackled by the routine story that has no surprises. Kuno Becker lacks the presence, as Santiago, to draw you in to his character, making me wonder what another actor would have made of the role. For much of the film, Santiago’s success seems more due to the kindness of others than to any athletic ability.