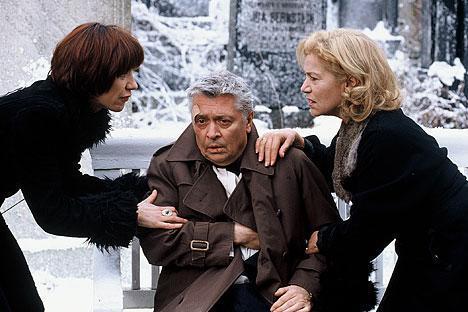 Jacob “Jackie” Zucker (Henry Hubchen) is a former East German sportscaster who was trapped behind the Iron Curtain when the Berlin Wall separated him from his family when he was just a schoolboy. Now, many years later and down on his luck after the Wall fell, Jackie has turned to gambling and hustling at pool to make ends meet. When he learns of the death of his mother he reunites with his long-estranged brother, quasi-Orthodox Samuel (Udo Samel), but they must reconcile if they are to share the considerable inheritance in “Go for Zucker!”

Jakob Zuckermann (Henry Hübchen, "Distant Lights") was a former East German celebrity sportscaster known as Jackie Zucker, but in the West, he's 44,500 Euros in debt, his wife Marlene (Hannelore Elsner, "The Eighth Day") wants a divorce, his daughter Jana (Anja Franke) doesn't speak to him and his son Thomas (Steffen Groth) is gay. As Jackie is casting about for the 5,000 Euro entry fee for the European Pool Tournament he is convinced he can win, he receives word that his mother has died and his inheritance requires that he reconcile with his religious brother Samuel (Udo Samel, "The Piano Teacher") and sit Shiva for seven days in "Go for Zucker!" This German Jewish comedy is the first of its kind since the WWII era and has made a big splash in a home country relieved to finally be able to consider Jews mixed with Gentiles in an everyday comic setting. The film's sociological ramifications have perhaps rendered it overpraised in Germany (where it won 6 of the 10 German Film Awards it was nominated for, including Best Actor and Best Picture), although the odd German sense of humor is probably also a factor. Still "Go for Zucker!" is a low key charmer which hews closely to classic comedy situations while attempting to change a national zeitgeist. Copping a page from "Sunset Boulevard," cowriter (with Holger Franke)/director Dani Levy ("Aimee & Jaguar") begins his film with narration from his protagonist as he lies inert on a metal gurney, surprised by his wife's copious weeping and annoyed by the gropings of two male gay orderlies (the film's older characters are homophobic, but it features a healthy lesbian relationship). Zucker claims what may turn out to be the last week of his life as his best, before the roguish hustler goes back to outline how he lied and cheated his way towards familial togetherness and economic stability. Zucker is so out of touch with his family, that his own son is one of his debt collectors and he keeps calling his granddaughter Sarah Sandra. At the airport he's surprised to discover that Samuel is accompanied by his family - wife Golda (Golda Tencer), ultra-Orthodox son Joshua (Sebastian Blomberg, "Anatomy," "What to Do in Case of Fire") and hot-to-trot daughter Lilly (Elena Uhlig) - a photo negative of his own brood who expect to stay at his Berlin apartment. The non-Jewish Marlene has taken a crash course in Judaism and its customs but the first evening a shocked Golda tells Samuel 'Your brother's family is as kosher as a pork chop.' The thing is, both families have their eyes on mama's prize. As Jackie fakes heart failure and doses his brother with Ecstasy, their kids prove to be more than kissin' cousins, but all's well that ends well when the inheritance's officiating Rabbi (Rolf Hoppe, "Schtonk!") makes his final decision. "Go for Zucker!" is like a Jewish pool hall version of "Bend It Like Beckham" combined with the farcical inheritance hi jinx employed since the silent era. If there's not much original here, Henry Hübchen is such a charmingly irredeemable rogue that he makes the material seem almost fresh. Udo Samel has his moments, particularly when left alone with a Palestinian belly dancer while zonked on drugs and Golda Tencer gives an appealing reading of the overfed Jewish wife. Anja Franke is the most noteworthy of the children, an open faced massage therapist who bonds with her dad while abetting his underhanded plots to compete in his tournament. "Go for Zucker!" favors the broad comedy which tends to succeed with German audiences, but one must appreciate a film that uses the Berlin Wall as a metaphorical and literal obstacle to brotherly love and the sight of a German Gentile housewife frantic to appear kosher.

This controversial German-Jewish comedy has been breaking records in its native country since its release at the beginning of 2005. It has been in German theaters since then and dominated the German Film Prizes with six wins, including best picture and best actor (for Henry Hubchen). And, it is said to be the first German-made Jewish comedy since World War Two, something I won’t argue. Jackie, though Jewish by birth, had lived so long under the East German communist government any vestige of the religion had long been washed away. He is an unabashed gambler and is always in debt with his bookies. He picks up a few bucks here and there by hustling local rubes with his pool cue, garnering the occasional beating when found out. Then, he receives a telegram informing him that his mother has died, leaving a large inheritance. But, there’s a catch or two attached to the loot. First, he must reconcile with Samuel and be brothers again. Second, his mother insists on having a true Jewish funeral that includes sitting shiva – a weeklong wake where the family attends to the deceased. All social events for the bereaved family must be put on hold during shiva but this is a real problem for Jackie He owes 44,500 Euros to the government and has to come up with the dough in a couple of days or lose everything. His only hope is to take part in a big billiards tournament and win the grand prize of a hundred thousand bucks. But, he needs 5000 to buy into the tourney and secretly breaks the rules of his birth religion to get the entry fee and play in the tournament. Go for Zucker!” combines Jackie’s gambling and schemes to bypass the strictures of the Jewish faith in a madcap, slapstick comedic way that brazenly pokes fun at members of a faith (any faith) unheard of since the Holocaust. Jackie is the product of the atheistic society he grew up in so there is not much Jewish left in the man. His brother, Samuel, appears to be an earnest orthodox believer but this may not run too deep since he is willing to turn a blind eye to Jackie’s shiva-breaking antics in order get his share of mom’s money. The clash of cultures and conflicts is refreshingly irreverent and amusing from start to finish. Director/co-scripter Dani Levy, with writing partner Holger Franke, goes far in putting humor into a subject that has long been a sore on German and German-Jewish relations. They give a human face to a culture that has anguished for over six decades in Germany. Humor heals and “Go for Zucker!” has its share of slapstick belly laughs and wry social humor. German comedies are pretty rare here in America and it’s even rarer that you get the chance to see one that also pokes fun, good-naturedly, at certain members of the German-Jewish faith. “Go for Zucker!” takes pleasure in its irreverence.