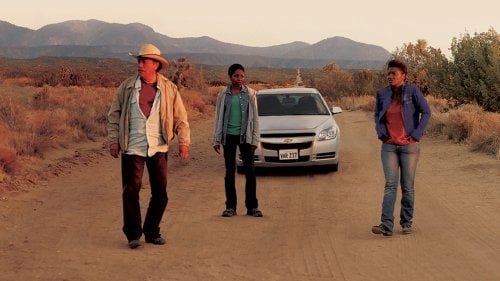 Bernice Stokes (LisaGay Hamilton) is a parole officer in LA. One of her “clients” is Fontayne (Yolonda Ross), a tough parolee who is doing her best to go straight. They were once friends and, when Bernice is told her son, Rodney (McKinley Belcher III) has been kidnapped, they become friends again as they travel to Mexico to try to find him in “Go for Sisters.”

When parole officer Bernice (LisaGay Hamilton, "Honeydripper," "Take Shelter") is tipped off that her son, Rodney, who hasn't been returning her calls, is a murder suspect, she enlists disgraced cop Freddy Suarez (Edward James Olmos, "2 Guns") and recent parolee Fontayne (Yolonda Ross, HBO's 'Treme'), an old estranged friend, to head to Mexico and find him. Writer/director John Sayles was once an American indie icon with such films as "Return of the Secaucus Seven" and "Eight Men Out," but he hasn't made a really strong film since 1996's "Lone Star." With his latest, he returns to the Mexican border, this time on the California side, and its his most enjoyable outing since then. Too bad about that clunky title (Fontayne remarks she and Bernice could 'go for sisters'). Sayles pulls us in immediately with Bernice's typically bad day in which she deflects one false sob story after another. Fontayne's appearance is a surprise, but even we can tell this woman's story is genuine. Hamilton, a Sayles veteran, is terrific in this role as a by-the-book parole officer who goes completely off it when it comes to son. Ross is tripped up a bit at the beginning by dialogue that's too eloquent, writerly for her character, but that's corrected quickly as Fontayne reverses roles with her friend, becoming the legal gatekeeper, at least until we learn she's packing. Then Suarez ('They call me the Terminator') is added to the mix, adding a sharp dose of comedy. "Go for Sisters" is a mystery thriller full of unexpected twists and clever character dovetailing. Sayle'ss typical social commentary is there, but this time it's subtext to the fun.

John Sales has been making his independent film since his debut with “The Return of the Secaucus Seven” in 1976. Since then the prolific filmmaker has taken the helm and written many films. His latest though, “Go for Sisters,” is a clichéd story (with some interesting and well-done parts) of two women on a mission to save Bernice’s son. But, solid acting and well-defined characters bring the film above the cliché. LisaGay Hamilton and Yolanda Ross are terrific as the unlikely team on a quest. They have lived the last 20 years, since their friendship broke, on opposite sides of the law. Yolanda, though, has worked very hard to stay clean and sober and Bernice sees that she is still a good friend. While on their mission of rescue they seek out the help of Freddy Suarez (Edward Kames Olmos), a disgraced ex-cop, to find Bernice’s son. This trio of actors have a great chemistry and this raises the bar on “Go for Sisters” and help overcome the mostly formulaic story. The rescue tale takes Bernice, Yolanda and Freddy from Los Angeles to Tijuana as they try to trace Rodney’s whereabouts and learn his fate – dead or alive? Their search brings them into the dark underbelly of human trafficking from Mexico to the US, including dealing with the menacing Chinese Mafia operating south of the border. This makes “Go for Sisters” a buddy road movie with a femme spin. John Sayles has had an eclectic career as director, writer, actor and editor with some stellar works, such as “Lone Star,” “Passion Fish” and “Eight Men Out.” He is known for the originality of his stories so “Go for Sisters” and its oft-told storyline is a bit of a disappointment.