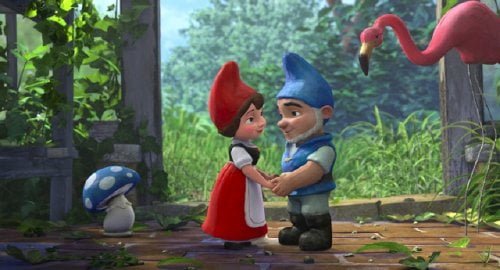 In Stratford-Upon-Avon on Verona Drive, Miss Montague (voice of Julie Walters, "Mamma Mia!") and Mr. Capulet (voice of Richard Wilson) live in abutting semi-detached Tudors. They don't get along, but they're both unaware that their garden statuary continues their feuding when they're not looking. One day, one of Capulet's red girl gnomes ventures out of the garden to an abandoned, overgrown greenhouse next door and sparks fly when she runs into a Montague blue on the run from the reds in "Gnomeo & Juliet."

The garden gnome has become a piece of beloved kitsch in recent years, ever since one began to travel the globe, so it would seem adapting Shakespeare's most well know play for them should be ripe for animated storytelling. Alas, cowriter (with Mark Burton, "Wallace & Gromit in The Curse of the Were-Rabbit")/director Kelly Asbury ("Shrek 2") fails to mine his material for the inspired visual gags and transported worlds the Pixar team so excels at. This British/Disney coproduction offers occasional, mild amusement, but most will be lost on the kiddies, who should enjoy it nonetheless. Adults will find its 84 minutes a real slog and its vocal cast an embarrassment of riches mostly left bankrupt. The basic bones of the age old tale are here, but the execution is inconsistent with some characters named literally - like Gnomeo's foe Tybalt (voice of Jason Statham, "The Mechanic") - and others not - like Juliet's 'nurse' Nanette (voice of Ashley Jensen, TV's 'Ugly Betty'), a water-spouting frog here, or the 'friar,' now Featherstone (voice of Jim Cummings, "The Princess and the Frog's" Ray), a plastic lawn flamingo. These characters 'die' by becoming 'smashed' and they duel with garden implements and lawn mowers. The writers' idea of a good pun is 'Let's kick some grass.' I laughed once - the gnomes, like the toys of "Toy Story" go into freeze mode when the eyes of a human turn toward them - so a fighting pair, one broken, configure themselves into a gnome pushing a wheelbarrow. The film needed a whole lot more of humor relevant to its world. Most Shakespearean references are emblazoned on transportation - a Stratford-Upon-Avon bus, Rosencrantz and Guildenstern movers, a Tempest Teapot truck - although the bard himself (voice of Patrick Stewart) gives Gnomeo advice in the form of a statue who much prefers his original unhappy ending. Of course, that cannot happen here, although there is are fakeouts involving both Gnomeo and Juliet that convince his mother Lady Bluebury (voice of Maggie Smith) and her father Lord Redbrick (voice of Michael Caine) to bury the axe, so to speak. Oddly, the entire film is set to Elton John songs which often have little to do with the action on screen, although, sadly, there is a dance out to "Crocodile Rock" to pad the running time. As Gnomeo, James McAvoy ("Wanted"), a strong young actor, is gung ho, but not especially endearing whereas Emily Blunt's ("The Wolfman") Juliet sounds too refined for a ceramic figure with a kewpie doll face and big red hat. Jim Cummings, who was so wonderful as the tragic romantic firefly Ray in "The Princess and the Frog," steals the show as a tragically romantic plastic flamingo, but again, the Spanish accented sidekick is becoming a bit of a cliche (see "Shrek's" Puss in Boots, "Toy Story 3's" 'Spanish mode' Buz). Ozzy Osbourne voices Fawn, a thuggish deer. The U.S. is repped by Dolly Parton in one scene as an aberration of some kind of white trash gnome and Hulk Hogan doing the voice over for the Terrafirminator, a souped up mower that is overkill in more ways than one.