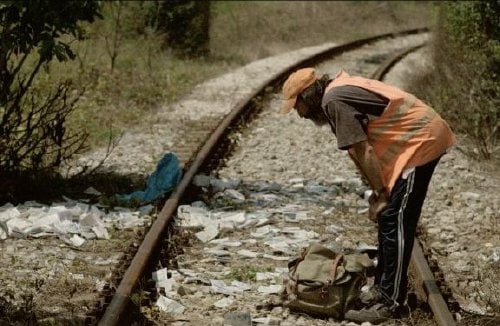 Tzanko Petrov (Stephan Denolyubov) is an unassuming, reclusive railroad worker in Bulgaria. When he finds a horde of cash alongside the rail line, he does the right thing and dutifully turns the loot over to the authorities, in the guise of Ministry of Transportation flack Julia Staykova (Margita Gosheva). The unscrupulous bureaucrat uses Tzanko and the money to cover up corruption at the highest levels of government in “Glory.”

As the Ministry of Transport's publicist, Julia Staykova (Margita Gosheva), attempts to quell the latest corruption scandal, loner linesman Tzanko Petrov (Stefan Denolyubov) finds millions in cash on the tracks. He calls the police to turn it in and Staykova smells a publicity opportunity. But when she takes the family heirloom from his wrist so Minister Kanchev (Ivan Savov) can present him with a lesser, digital version during a televized ceremony, Petrov becomes her biggest problem as he begs for the return of his "Glory." This pitch black Bulgarian satire from writer/directors Petar Valchanov and Kristina Grozeva provokes cringes and laughs in equal measure as its honest protagonist becomes victim to a corrupt political system. The Glory of the title is a watch brand and time an ever present element, Julia's husband Valeri (Kitodar Todorov) keeping tabs on the fertility injections his wife neglects to the demands of her schedule (at one point, Valeri administers one in the Ministry using a standing Bulgarian flag to shield her, a literal state-led coverup). The downcast, hirsute Petrov has kept to himself, taking pleasure in the daily routine of feeding his rabbits, another timed element which will be thrown into chaos. When Julia sends Ani (Ana Bratoeva) with a camera crew to interview him in the railyard, they can barely get him to speak, her tape cause for high hilarity back at the office. Running late, Julia reroutes Valeri to pick up the linesman in a town square. In their rush, Tzanko's pants are ruined by spilled coffee. Ministry colleagues are recruited to swap pants. After the Minister presents Petrov with a cheap digital timepiece, he offers the man a chance to ask a question. 'How much longer will our paychecks be delayed?' he asks, cutting short the Minister's explanation by telling him he knows the root of their financial problems. He's brushed off, of course, left standing pantless in the men's bathroom when all is said and done, but draws the attention of journalist Kiril Kolev (Milko Lazarov), who invites Petrov onto his television program. Petrov only gets into deeper waters, Valchanov and Grozeva exposing the media's self interested agenda with no regard for its source. The film's final scene is shocking, Petrov's demands finally met after having been run through the violent gauntlet of his whole community. The film's handheld camera lends urgency as its clock ticks. The divide between those in cushy government jobs and blue collar workers is notable everywhere in the production. "Glory" is the perfect movie for our times, a fable of economic inequality and government corruption. If the 2000's brought forth the social justice films of the Romanian New Wave, now may be the time to begin looking southward towards Bulgaria. Grade:

We do not see many Bulgarian/Greek films here in the US, much like we did not see films from Rumania before the likes of “The Death of Mr. Lazeresco (2005)” and “12:08 East of Bucharest (2006).” “Glory” may well be the film that lands Bulgaria on the international filmmaking map. Tzanko is an honest man. He does his job faithfully and ignores his fellow workers when he sees them stealing fuel and other equipment. When he finds the mysterious horde of cash, he immediately turns it over to the Ministry of Transportation. His honesty makes him a national “hero” and he is summoned by Julia Staykova to be honored by the minister with a new watch. She takes Tzanko’s treasured old watch – his father inscribed it “To my son Tzanko”- promising to give it back after the ceremony. She does not and this leads to a steady build of the man, who has a severe stutter, trying to get his precious watch back from an unyielding and unhelpful bureaucracy. (His new watch does not even tell the correct time, something essential to the railroad worker.) But, Tzanko’s humiliation does not stop there and that is what “Glory” is about: the system does not care a hoot about the little guy, unless it makes you (the government) look good. The unrelenting build up of injustices to the film’s climax left me with a knot in my stomach. The poignant thing about the film and its story is that this could be anywhere.