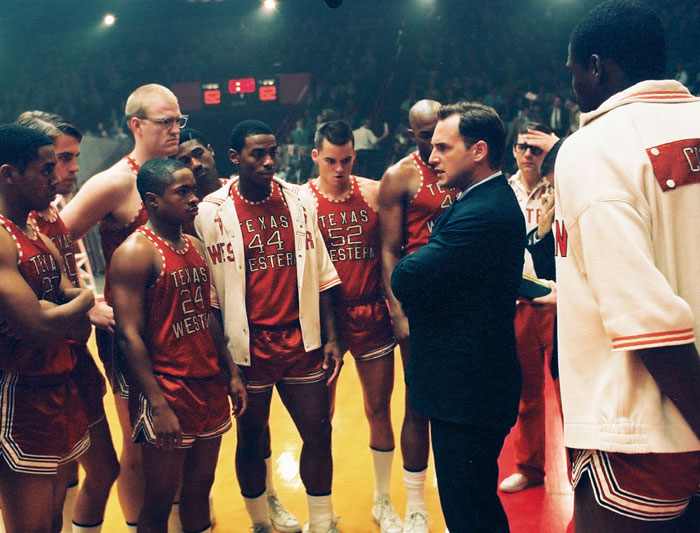 When Don Haskins (Josh Lucas, "Stealth," "An Unfinished Life") was hired to coach the Texas Western University basketball team in 1965, black players were only sparingly put on the starting line, especially in the South. The Coach made two unprecedented movies. He recruited talent from the street games of Detroit and New York City and then went on to put the first all black starting lineup in NCAA history into the nationally televised championship game against the all white Kentucky Wildcats. In more ways than one, that year was the Texas Miners trip down "Glory Road."

Jerry Bruckheimer ("Remember the Titans," "Bad Boys II") has produced another inspirational true life sports story where racism acts as the central opponent of both a team and its coach with "Glory Road," but the fact that this one's a little muddled, a little messy, often works in its favor. "Glory Road" never falls into the overly slick formula of films like Disney's Olympic hockey vehicle, "Miracle" Haskins takes a big step up in going from a women's basketball coach to a university coach, but Texas Western is a poor school and its Dean makes it clear that Don's being hired as much to police an unruly dorm as to coach its basketball team. He moves his supportive wife Mary (Emily Deschanel, "Boogeyman") and their three kids into the dorm, then begins begging for recruitment funds. He and his assistants, Ross (Red West, "The Rainmaker") and Moe (Evan Jones, "Jarhead) find seven talented, and black, men in Indiana, Detroit and New York City and bring them on down to El Paso. The inner city boys feel as alien in their new environment as the Texans certainly view them, but, after some initial competitive hostility, their white teammates welcome the recruits. That doesn't mean the Dean and the university's chief benefactor, Wade Richardson (Wilbur Fitzgerald, "Diary of a Mad Black Woman"), don't have their doubts, nor the players, who bristle under Haskins' old school methods, but when the Miners begin an uninterrupted winning streak, opinion starts to turn around. Debuting director James Gartner doesn't always keep his story lines clear. There are some underdeveloped plot points, such as the coach's seemingly inconsistent application of his 'no booze, no women' ban and the mystery as to where those recruitment funds finally came from (not to mention how Haskins manages to arrange to speak to Moe from one city to another via public phone booth), yet the roughness around the edges is part of "Glory Road's" charm. You may initially have some trouble putting some of the players together with their back stories, not to mention ever catching up with the actual names of the white team mates, but the personalities eventually come through as does the familial bonding of the team. There's some subtlety here, such as how Bobby Joe Hill (Derek Hill, "Friday Night Lights") is first seen slumped at the end of his team's bench, getting into play when his coach wordlessly swipes him with a towel, not worth a word or a touch, but clearly the most talented player on the court. And there are bright bursts of humor, like a New Yorker's attempt to get familiar food from a Texas border town cafeteria or a mother's embarrassing insurance of her son's education. When racism rears its ugly head when the Miners are on the playoff road, the whole team feels it. And the barrier breaking is nicely handled, with the urban Blacks infiltrating a Tijuana nightclub, then later bringing the 'farm boys' to an all Black shindig (and teaching them the 'badness' of being Black vs. 'colored' - 'what are we, a load of laundry?'). When Haskins makes the decision to use an all Black starting lineup for the championship game in order to make a point (people actually thought Black athletes didn't have the intelligence to play as a team back in 1966!), the white players are disappointed, but sign on with the agenda. It's not just about basketball anymore. Josh Lucas is solid as the determined coach, albeit ofttimes reduced to quick cuts of game time pacing and ranting. But the film is more of an ensemble, with Haskins' assistants forming a colorful trinity. Red West is the older 'character' who grows from the standard assumption about Black players (he gets the film's funniest line - 'You're carrying on like Negroes are the future of basketball') to shame for his own race once he's lived with another. Evan Jones is the younger, nerdy, bespectacled type of the times. The recruits' only star is Luke as the showy team leader Bobby Joe Hill, the rest an assemblage of athletes with little to no acting experience and vice versa. Damaine Radcliff is the heart of the team as Willie "Scoops" Cager, held on the bench by a medical condition until a climatic crunch. Schin A.S. Kerr's Big Daddy D is the tough giant who contrasts with small and scrappy Willie Worsley (Samuel Jones III, TV's "ER"). Mehcad Brooks (TV's "Desperate Housewives") is Harry Flournoy, spiritually tied to his momma's apron strings and MTV v-jay Al Shearer is Nevil Shed, a man who has to overcome his own self doubts. Emily Deschanel is proving quite the chameleon. Hers may only be the 'wife' role, but she oozes a sixties sensibility. Elizabeth Omilami ("Ray," "Bobby Jones: Stroke of Genius") adds comic relief as Harry's determined mother and Valeri Ross ("Losing Isaiah") counterbalances with the heart tugging maternal side. Very convincing in a late appearance is Jon Voight ("Anaconda," "National Treasure") as the arrogant and enigmatic Kentucky Wildcats coach Adolph Rupp. "Glory Road" may sound like one of those rote sports films you've seen a hundred times before, but it has its own merits. While it documents a little known, but clearly major milestone in the civil rights movement, newcomer Gartner never forgets the essentials either, keeping the games themselves exciting as much for the individual dramas being played out as that end result on the big scoreboard.