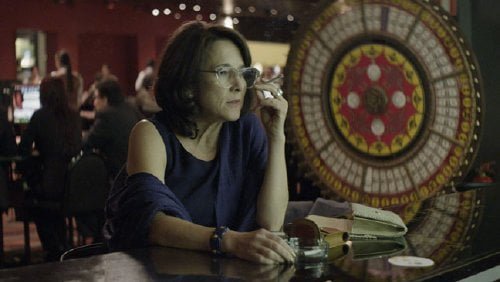 It has been 12 years since her divorce and Gloria (Paulina Garcia) spends her weekends at the various dating clubs in Santiago. But, she has never found a man to love and be loved by. That is, until she meets Rodolfo (Sergio Hernandez), a shy man who is far more recently divorced than “Gloria.”

In Santiago, Chile, a divorcee approaching her sixties continues to embrace the possibilities still to come. She goes to dance clubs for fun, but there is always the chance of a romantic adventure to raise the stakes. When she meets Rodolfo (Sergio Hernández, "No"), it looks like her life is about to get brighter but even rocky roads ahead cannot dampen the spirit of "Gloria." Cowriter (with Gonzalo Maza)/director Sebastián Lelio's film, Chile’s official entry Foreign Language entry for the Academy Awards, was considered a surprising exclusion from the eventual five nominees, but even though the Academy is well known for disregarding some of the more worthy foreign films, I for one was not surprised. "Gloria" does boast a very good performance from Berlin Silver Bear winner for Best Actress Paulina García, but the filmmakers, who clearly wish to present her as an irrepressible life force, have also made her behavior too contrary to fully root for her. Flaws are a necessary component of any complex character, but here Gloria is guilty of the same sort of inconsideration that we are supposed to condemn Rodolfo for while being rude about it to boot. Youthful spirit is also confused with juvenile irresponsibility in the way Gloria reacts to Rodolfo's weakness. Alcohol is a factor in both episodes. Before this we must admire this woman who ventures into clubs alone, happy just to dance. She's the type of woman who sings along to the radio in her car with gusto and Garcia demands our attention, her vibrancy powered by the sheer will to overcome loneliness. When Gloria does connect, she's all in, making love with passion, flinging herself off a bridge on a bungee cord, engaging in paintball battles. Lelio's maddening climax puts a damper on things, but he ends his film on an upbeat note, Gloria alone again at a wedding, dancing to a Spanish language version of her namesake hit. García fuels this shapeless, misguided character study with more character than it deserves - she's a real firecracker.

The past few years have been kind, film-wise, to the 40+ year old demographic with stories skewing away from youthful audience. “Gloria” is just that kind of films as it follows its title character in her search to find happiness and companionship. Paulina Garcia envelops her character as she does the date bar circuit looking for Mr. Right. She finds him, maybe, in Rodolfo, but he has his own set of baggage – his ex-wife and children who he remains close to. This baggage affects the relationship between Gloria and Rodolfo as, first, tells her he cannot get Gloria out of his head. Then, without explanation during a birthday dinner for her son, he walks out and disappears from Gloria’s life – then comes back to her only to leave her once again. The film shows the fleeting elusiveness of love for our middle-aged heroine. Paulina Garcia gives a smart feistiness to her Gloria as she continues life after divorce. It is a good character study of life after 40. The story, by director Sebastian Lelio and Gonzalo Maza, is not quite up to the star’s study of Gloria. Sergio Hernandez, as Rodolfo, lacks dimension of character and his coming and going in Gloria’s life rings false, especially when considering her megawatt presence. The reason to see “Gloria” is to appreciate the fine performance by Paulina Garcia.