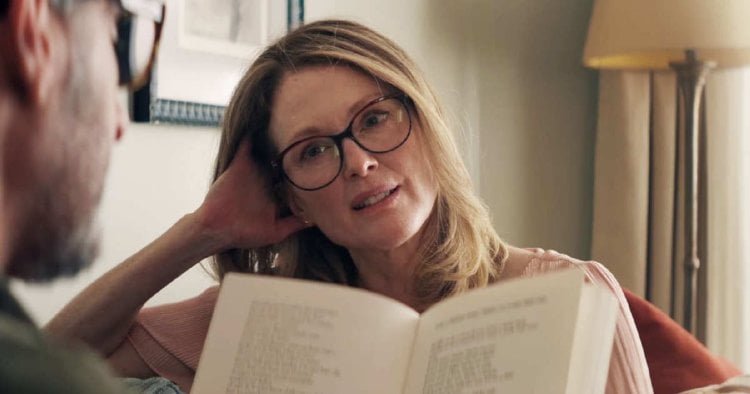 A middle aged woman (Julianne Moore) sips a drink at a dance club playing disco. She spots someone and approaches him, reminding him of who she is. It’s been twelve years since her divorce, which was around the last time he saw “Gloria Bell.”

There is a small history of directors remaking their own films, like Alfred Hitchcock’s 1934 and 1956 versions of “The Man Who Knew Too Much.” The practice is perhaps more notable with foreign language films being remade in English, their filmmakers usually stumbling translating their own culture (see George Sluizer’s “The Vanishing,” Takashi Shimizu’s “Ju-On” and “The Grudge,” Ken Scott’s French Canadian “Starbuck” remade as “Delivery Man” or French director Francis Veber, a remake industry of sorts who has written remakes of his own and other filmmakers’ films and had eight of his own films remade including his own reinterpretation of “The Fugitives”). Now Chilean director Sebastián Lelio has done it with his acclaimed 2013 “Gloria” and it is the first English language remake I can think of that I enjoyed more than the original. As good as Paulina Garcia was in Santiago, I found myself understanding the motivations of the character more with Julianne Moore’s Los Angeles-based take. Gloria is an insurance adjuster who lives alone in a tastefully furnished apartment. She keeps getting unwanted visits from a hairless sphinx cat and reports the increasingly unhinged (and noisy) behavior of her upstairs neighbor, the landlord’s son, to his mother. Her son Peter (Michael Cera) is a new father whose wife has gone off ‘to find herself’ while her yoga instructor daughter Anne (Caren Pistorius) is planning on moving to Sweden to be with Theo (Jesse Erwin), the professional big wave surfer she is starting a family with. Gloria lunches with her mom (Holland Taylor), an independently well off woman concerned that she may not be leaving anything to her daughter, and enjoys a close relationship with her married friend Vicky (Rita Wilson) whose daughter is close to Anne’s age. Gloria always sings along to the pop tunes that play in her car and has no problem frequenting a local dance club on her own. One night out on the floor she spies a man looking at her intently and gives him an encouraging look back. Arnold (John Turturro) sits beside her at the bar and they quickly fall into conversation. Soon they are lovers, Arnold infatuated with this woman with a lust for life, one who enjoys paintball and bungee jumping at his Vertigo Park. But Arnold is more recently divorced than Gloria and is at the beck and call of his ex-wife and two adult daughters. Not only can he not break free of his former life, he cannot understand the easy relationship Gloria has with hers, disappearing from Peter’s birthday party after Gloria’s ex Dustin (Brad Garrett) notes how in love they once had been looking at old pictures (Dustin’s new wife Fiona (Jeanne Tripplehorn) has no similar issues). After that fiasco, Arnold fights hard to win Gloria back, with a weekend in Vegas proving pivotal for them both. There is such a strong sense of a life lived in “Gloria Bell,” whose supporting players all contribute to an understanding of the central character (the film also features Barbara Sukowa as a coworker and Sean Astin in a strangely silent role). This film is softer is its look (cinematography by “The Neon Demon’s” Natasha Braier) and approach (adapted by Lelio with Alice Johnson Boher), even while hewing closely to the original. Julianne Moore gives us a woman we wish was not alone, yet feel perfectly comfortable leaving that way. Simply put, Gloria Bell is about learning to enjoy life on one’s own and one’s own terms, accepting loneliness as part of the human condition. Grade: