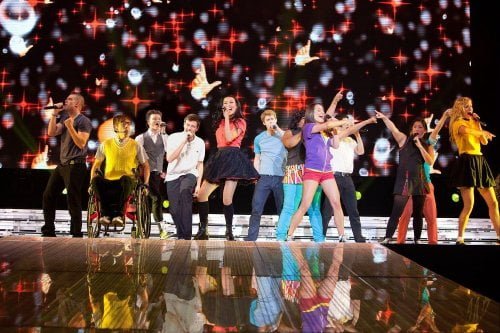 Earlier this year, the cast of the popular TV series, “Glee,” took their show on the road in a 15 city US concert tour. With just these few cities included in the tour, the producers filmed the concerts and brought these performances to the big screen for the rest of the fans of “Glee: The 3D Concert Movie.”

There's the 'Glee' television show, the 'Glee' reality show and the Glee concert tour and now, for Gleeks who couldn't get tickets or travel to one of the live gigs and who cannot wait for the DVD release there is "Glee: The 3D Concert Movie." This two week engagement will probably turn out to be little more than publicity for the DVD. It's unlikely that the waning popularity of 3D alone will pull many into the theater, nor should it as it adds little to the experience. Directed by Kevin Tancharoen ("Fame"), the Glee concert experience isn't bad actually, but it's really all about the fans who want to see their television idols in the flesh. With few exceptions, 'Glee's' song and dance numbers work a lot better when integrated into the plots of the television series. But those fans. The filmmakers have decided to break up the tour numbers by following the stories of three fans plus one (more on that in a minute), and in so doing, have rather obnoxiously annointed 'Glee' as some kind of savior of the lost, the lonely, the different. First we meet Janae, a cheerleader who admits to being a member of the 'cool clique,' then is revealed to be a dwarf. A talented, bubbly dwarf who is invited to her prom by a regular sized football player. Then there's Josey, an Asperberger's sufferer who never had any friends until 'Glee' set her free. Trenton was humiliated in high school for the secret love letter he wrote to another boy in his notebook, but now, at nineteen, can proudly wear the same 'Likes Boys' t-shirt Kurt boasted in the 'Born Like This' Season 3 episode. Oh how 'Glee' has changed all our lives. If only instead of the 'look how we've brought New Directions to teenage prejudice' self-congratulation, they had had more fun, like they do with a tiny Asian tot who idolizes Blaine (Darren Criss). We see this little cutie dressed in a pint-sized Warbler uniform, aping along to a number on the TV set behind him. It's adorable. As to the show itself, well it starts off predictably with the 'Don't Stop Believin' anthem, although the cast (who remain in character even for backstage interviews) is dressed down in Izod polos (a sponsor!) and jeans, not very 'Glee'-like (jazzier costume changes follow, but not to the levels one might expect). It's also surprising to see who gets most of the spotlight here - it's no surprise Lea Michele gets more than one solo (and is the only person you can hear in the first two group numbers), but if my count's not incorrect, Kevin McHale's Artie comes in at number 2! Heather Morris also gets quite a bit of screen time, Brittany doing her big Brittany number (lip synched?) and prominent in many other bits. Cory Monteith (Finn), Amber Riley (Mercedes), Mark Salling (Puck) and Naya Rivera (Santana) all get one solo a piece, often relegated to the second, smaller stage set amidst the audience for more hands-on participation. Riley has real presence and she and Salling go the most out of their way to interact with fans. The Warblers also have a three-song set on the mini-stage, Darren Chris getting more close-up time than major characters there since day one. Chris Colfer (Kurt) isn't prominent until later going and then performs a blah 'Wanna Hold Your Hand.' The non-singing Harry Shum Jr. (the show's Mike Chang) gets more face time (and stakes his place within the group with aplomb). Really relegated to the sidelines are Dianna Agron (Quinn) and Chord Overstreet (Sam), neither well integrated into group numbers, their partial duet an also-ran. Tina (Jenna Ushkowitz) and Lauren (Ashley Fink) are also on hand as are some additional dancers. You'll have to wait for the DVD for any Sue Sylvester (Jane Lynch), whose character was cut from the theatrical version. Mr. Schuester is also absent, presumably because actor Matthew Morrison scheduled his own tour in support of his debut album (he has instead been guesting on the New Kids on the Block/Backstreet Boys tour). This particular concert does feature a special guest star, though, whose routine is one of the highlights. Everything after (fortunately not much) is a let down. "Glee: The 3D Concert Movie" is really only for those fans of the show who must participate in all things 'Glee' but the talented cast just might convince non-watchers to give the show a chance. They're a hard working bunch and they're not the ones who are out there claiming they've made the world a better place.