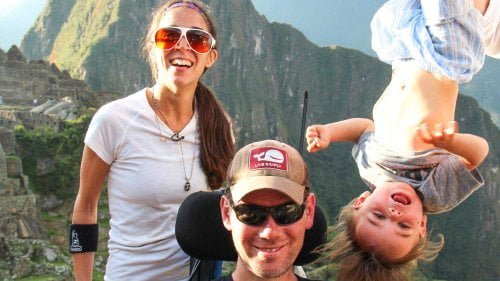 Steve Gleason was a star college linebacker whose Washington State team played in the 1997 Rose Bowl. His dad thought he was 'way too small' for the NFL, but Steve went on to play for the New Orleans Saints, his blocking of a punt in their first game after Hurricane Katrina becoming a symbol of rebirth for the city. But in 2011, he was diagnosed with ALS, more commonly known as Lou Gehrig's disease, and given a 2-5 year prognosis. Six weeks later, he and his wife Michel Varisco discovered they were expecting their first child and so Steve began to make a series of video messages for the child he thought he'd never have a conversation with in "Gleason."

Writer/director Clay Tweel ("Finders Keepers") opens his film with Steve Gleason addressing his yet-to-be-born son - and us - talking about how he hopes that the videos he will be making will enable his child to get to know him in a deeper way than perhaps being around for another forty or fifty years would. Tweel follows with Gleason's background, his childhood in a dysfunctional home, his rise in the sports world, his free spirit, the latter of which found its match in the woman who would become his wife. It is a truly touching romance between a materially modest NFL player and a woman with joie de vive and a love of adventure travel. But what else is Michel? The heart of this movie as it turns out, yet Tweel is determined to make his documentary about fathers and sons. We learn that Steve's parents divorced when he was fifteen, yet his mother appears briefly and early on. We're given no explanation as to where she is during the years her son battles ALS. But Michel is there, raising a child while also becoming the type of caregiver few could imagine. "Gleason" arrives on a waft of critical superlatives stressing its uplifting nature, but frankly, this documentary depressed the hell out of me. Steve Gleason struggles through a horrible illness while also founding Team Gleason, a charity aiming to make technology, like the machines which enable ALS sufferers to communicate once they lose their voices, available while encouraging fellow ALS victims to embrace life. It's an admirable goal, but it also takes its toll. As Steve loses his mobility, his voice and control over his bodily functions, we see the life drain out of his wife. The couple only seem to connect over their son, Rivers. Tweel also sidesteps financial issues. Gleason was in the NFL for eight years. We never do learn how Michel made a living (although her artistic nature comes into focus in the film's third act). When Steve decides to extend his life with tracheotomy surgery, we are told 95% of ALS suffers reject this because of the 24 hour care and cost. How do the Gleasons do it? Michel's life consists of caregiving at home, a nice home at that. A lot of time is given over to Steve's relationship with his own father, Mike, a religious man we learn was a workaholic. He brings his son to a faith healer, something which Michel obviously finds counter productive. Mike exasperates Steve, but there is love there and the two eventually come together. The portrayal of Steve and Rivers, whose birth is featured within the film, is more joyful, the son riding about on Steve's motorized wheelchair. But what of Michel? This woman who so embraced life tells us she never wanted to be a saint. Is that look of panic on her face as her husband's wheeled in for surgery concern or fear of her own future? "Gleason" tells an incredible tale of a family struggling through the inconceivable, frequently even with humor, but the marriage at its heart faces troubling, less explored, consequences. Grade: