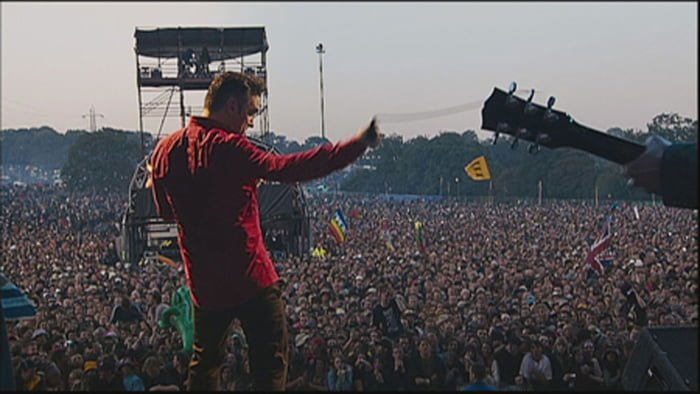 In 2002, the founder and organizer of the world's biggest and longest running music festival, Michael Eavis, concerned that the escalating problem of gatecrashers would put an end to his event, set out to get a definitive document of its thirty-five year history. Director Julien Temple ("The Great Rock 'n' Roll Swindle," "The Filth and the Fury") jumped in to record not only that year, but the subsequent three and gathered over 1,500 hours of professional and amateur archival film to present the experience that is "Glastonbury."

Glastonbury may be known to many Americans as the festival where some of their favorite British acts have headlined over the years, but Temple's documentary is a real eye-opener for those who haven't attended the event. Invariably compared to Woodstock, Glastonbury is so much more, a festival that brings out a unique English zany eccentricity a la the Edinburgh Fringe Festival and the type of performance art seen during Nevada's Burning Man festivities. In keeping with the latter fest's spiritual overtones, Temple stakes "Glastonbury" with its legendary history as the burial site of King Arthur and site of saints, mystics and holy men, before progressing to the clash between village locals ('No festival people served here') and the throngs that descend upon them almost every summer. This is where Temple's film most resembles "Woodstock," with its scenes of backed up traffic, nudity, camping and problematic hygiene. But unlike "Woodstock," Temple's film, while constantly interspersed with musical acts from The Velvet Underground, Melanie and Terry Reid to Morrissey, Coldplay and Nick Cave and his Bad Seeds, never presents an act in its entirety and refuses to follow a straight chronological path. What he does instead, weaving backwards and forwards throughout the years, is immerse his audience in the spirit of the festival with ingenious editing (Niven Howie, "Lock Stock and Two Smoking Barrels") and Tobias Zaldua) that shows the Glastonbury Festival as nothing short of a geographically bound society that just happens to exist for a few days a year. While the filmmakers doing an amazing job covering everything from the politics, the social causes, the policing, the friction, the children, the lack of sleep, drug use, drinking and performances on stage and off, there are a few curious aspects missing. We see aging hippies and current kids, but what about the lifestyles spun off from the many British musical movements over the years? I do not recall seeing a single Goth, let alone a number, in Temple's film, let alone bands of punks. Still, in 132 minutes, Temple has succeeded in so many areas that, this is a quibble with a film that manages to be information rich and impressionistic at the same time. Back in its second year, 1971, director Nicholas Roeg produced a film titled by its then known name of "Glastonbury Fayre," and this is how we know our concert films - recordings of a single show or tour caught in its own moment of time. What Temple has done with "Glastonbury" is quite something - he's captured the spirit of an event even as it has changed with the times.

In 1969 a dairy farmer in upstate New York hosted what would become the largest open air concert America has ever seen – Woodstock. But, since 1978 Great Britain has held an annual music event that continues, to this day, to rival that legendary concert and it is called Glastonbury.” The film, “Woodstock,” that came out of the 1969 event was rough, amateur and, now, quite dated. Director Julien Temple has learned a great deal about documenting a large scale outdoor concert and the result is a slickly edited, entertaining and informative work that is a quantum leap over the older film. The annual festival, held (also) on a dairy farm in the English countryside community of Glastonbury, has grown, over its decades long existence, into the world’s biggest pop music happening for rock, reggae, blues and more. Attracting crowds of over 250,000, the three day fest, held every June, features some of the biggest names in modern music. But, the musical arts event also features dance, comedy, theater, circus and cabaret and helmer Temple and his team captures the total scoped of the famous festival. First staged in 1970 by music lover and entrepreneur Michael Eavis, Glastonbury attracts worldwide attention and attendance. Temple utilizes archival footage and interviews from past concerts and fest coordinators, including founder Eavis, in addition to a close up and personal look into the fest as it stands today. The result, the music doc “Glastonbury,” shows all aspects of the fest, including the stage shows, the players and the attendees, making the 2+ hour film always interesting and entertaining and includes pop music artists such as Nick Cave, Dr. John, Massive Attack, The Prodigy, Richie Havens and Morrissey. Comparing “Glastonbury” to “Woodstock” is like comparing a big budget, richly researched and produced music doc to a gifted amateur’s home movie. Julien Temple’s opus is a must for music fans and documentary lovers alike.