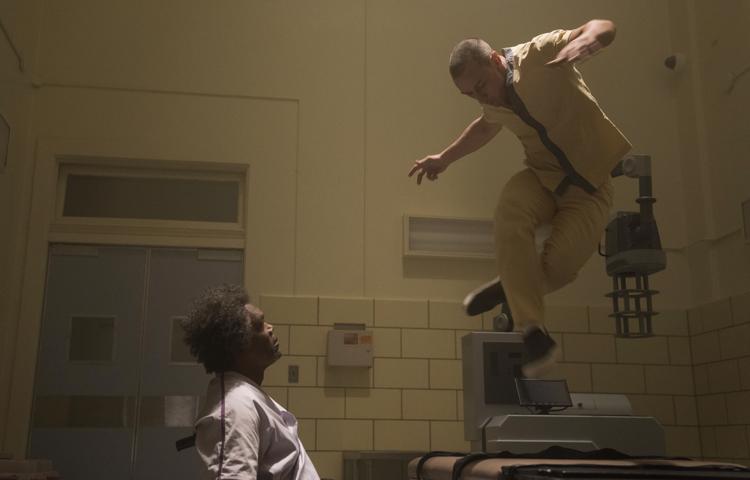 Another kidnapping of young women has gripped Philadelphia after the escape of Kevin Wendell Crumb, aka The Beast (James McAvoy). David Dunn (Bruce Willis), dubbed The Overseer by the media, is on the hunt, aided by his son Joseph (Spencer Treat Clark). But just when he's tracked Crumb down and captured him, Dunn finds himself captured by not only the police, but Dr. Ellie Staple (Sarah Paulson), who incarcerates both him and Kevin in Raven Hill Memorial Psychiatric Research Hospital along with another unexpected patient, Mr. "Glass."

I've always maintained that writer/director M. Night Shyamalan's best film was "Unbreakable," an intriguing, well executed consideration of the real life super hero and arch villain, using comic book conventions as its touchstones in a real world setting. Shyamalan surprised us all when his beautifully produced "Split," featuring multiple personality and parental abuse sufferer Crumb, turned out to be its sequel and easily his best film since "Unbreakable" after a string of dismal failures. Now along comes the capper of his planned trilogy to disappoint us once again. Shyamalan has come up with a solid, if somewhat underwhelming, idea here, something akin to the "X-Men" mythos stripped down to its barest elements, only to undercut it time and time again with lazy screenwriting. The sole reason to see "Glass" is to once again marvel at McAvoy's tremendously entertaining acting gymnastics. Things start sliding sideways right off the bat as Dunn's son explains to him where he believes The Beast lives based on a triangular crime site (he believes far outside of it based on...nothing). When Dunn tackles The Beast and both plunge through a warehouse window, they happen to land right between two phalanxes of Philadelphia cops, Dr. Staple in charge. Why is a psychological researcher immediately given custody of two criminal suspects with no booking, no evaluation, no trial? Shyamalan's trying to have things both ways with cartoony scenarios invading his real world setting. Why is Dunn even considered a criminal? Apparently he's been hunted for sixteen years, but we get some weak story about how one of The Beast's most recent kidnap victims was injured when Dunn saved her, ergo he's a menace to public safety. Or something. (This dynamic gets even more inexplicable when Staple sits across from all three, Glass sedated, Dunn shackled and Kevin, the most dangerously unpredictable, completely unfettered.) The three men under Staple's care all have their own methods of constraint and all have their own outside champions. Glass is heavily sedated and has the support of his mother (Charlayne Woodard). Dunn is kept in a room outfitted with pressure nozzles to a water tank and has his son on his side. Kevin is kept in a room with strobe lighting which, when activated, cause his current personality to change (in one scene, orderly Daryl (Adam David Thompson) has to use it when The Beast begins to emerge but Shyamalan has him keep hitting it repeatedly for no other reason than to give us an array of McAvoy performances). His outside comforter is none other than Casey Cooke (Anya Taylor-Joy), the victim he let get away who recognizes their shared abuse (and Dr. Staple denies her access only to abruptly change her mind in another bit of shoddy storytelling). As the title would suggest, the plot is driven by Glass who may not be as sedated as folks believe him to be. There's talk of the city's new, highest tower opening ('a real Marvel' declares a magazine cover in a bit of insider amusement Shyamalan feels the need to show us twice), an obvious spot for some terrorism. But in the end Shyamalan cannot resist his need for a twist and the real motivation, while beautifully explained by Glass to his mother, isn't all that exciting, nor does it seem like a real ending. I didn't buy Paulson's character for a second and Willis gets little screen time. Shyamalan uses some unused "Unbreakable" footage for flashbacks which remind us just how much better that film was. Jackson amuses with his comatose glare and Thompson and Luke Kirby have their moments as shift-switching orderlies, but McAvoy's the real draw here. It really is amazing how this relatively diminutive actor (he's 5'7") can turn himself into such a ferocious terror, not to mention his comical nine year-old and shifting assortment of adults, here including a professor of Japanese cinema and a couple of women to join Patricia. Most of "Split's" production team has returned and the film's cinematography, sound design and score cannot be faulted. Shyamalan came up with a great concept, so what happened? Perhaps the success of "Split" convinced him he was invincible. Grade: