Glass Onion: A Knives Out Mystery 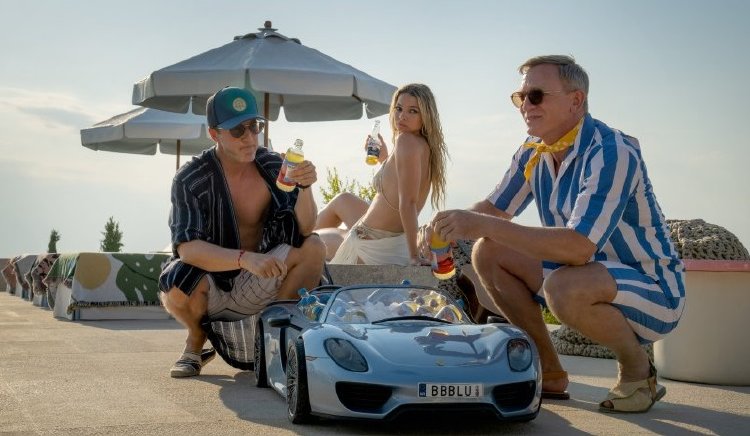 Writer/director Rian Johnson ("Brick," "Knives Out") returns with a sequel to his old-fashioned closed door mystery with a more elaborate setting, flashier characters and a structure that doubles back on itself to reveal Benoit’s preemptive investigation, but while everything about this one is more elaborate than the last, it’s less satisfying.  Beginning with the fact that the great Kathryn Hahn is wasted in an underwritten role and concluding with a climax which could have been entirely foregone with a simple device introduced earlier, “Glass Onion” is an empty calorie snack.

The new characters are introduced all taking different approaches to solving the opening of what appears an impenetrable wooden box, Duke’s Ma (Jackie Hoffman) humorously outwitting them all as Andi more practically simply takes a hammer to it.  As the group convenes to board the boat ferrying them to the island (shepherded by Ethan Hawke in one of many prominent cameos), Birdy stands out as the most clueless, a COVID denier in a mesh face mask who thinks ‘Jewy’ is a generic term for being cheap and dressing as Beyoncé for Halloween is homage.

Once on the island, Miles greets them strumming (another) Beatles tune, ‘Blackbird,’ ‘on Paul’s guitar,’ before tossing it aside, then takes Blanc up to the titular glass dome that crowns his multi-tiered estate to figure out just how the detective got his invite as only five were sent out.  Benoit asks if the box could have been reset and voila – the first mystery is solved, but a real unknown suspect introduced.

Later, down by the pool, Andi declares each and every one of them indebted to Miles for bailing them out of various problems and scandals and declares they’ll all stab a friend in the back to hang at ‘his golden teat.’  That night at dinner, just as Miles tries to initiate his murder game, Benoit gets up and solves it all too easily, but before the night is done there will be more than one real one to contend with.

While Craig has a ball with his Southern fried Poirot (and his gay partner introduced in another delightful cameo), few of this crew stand out.  Kate Hudson is the most fun as the vain, fabulously politically incorrect Birdy whom Benoit cautions with ‘It’s a dangerous thing to confuse speaking the truth and speaking without thought.’  Monáe has an intriguing balance to play, but is saddled with the drama amidst the comedy.  Jessica Henwick costars as Birdy’s assistant Peg and Madelyn Cline as Duke’s cheating girlfriend Whiskey, but it’s more fun spotting the likes of Natasha Lyonne and Kareem Abdul-Jabbar on a Zoom call or Serena Williams as a video-on-demand personal trainer.  Johnson’s “Brick” star Joseph Gordon-Levitt voices Miles’ hourly dong.

The setting is lavish, but the estate’s main hall, with pedestals holding glass sculptures dotting the room like an obstacle course, really isn’t all that interesting, despite various artworks, like the bare-chested portrait of its owner, scattered about.  Better are costumes, particularly Birdy’s flamboyant getups and Blanc’s ridiculous striped shorts set.  Nathan cousin-of-Rian Johnson’s score is genre perfect with its harpsichord kitsch, lavish orchestration and character motifs.

“Glass Onion: A Knives Out Mystery” isn’t really all that twisty, but its fangs are out for the corrupt 1% and that’s entertaining enough.

A collection of mystery boxes are sent to some very special friends of billionaire Miles Bron (Edward Norton). They all solve the puzzle the boxes contain, which brings them to his private Greek island to solve a murder not yet committed. One uninvited guest, famed detective Benoit Blanc (Daniel Craig), takes on the task in “Glass Onion: A Knives Out Mystery.”

This is the second installment in the “Knives Out (2019)” planned series, again written and directed by Rian Johnson, and I was none too eager to see it. This is mainly because I simply did not care for the first rendition of the whodunit series, also starring Craig as the eponymous southern gentleman gumshoe, Benoit Blanc. There was something about it that did not sit with me so another in the franchise held no appeal. Fortunately, second time seems to be the charm.

The opening montage of the invitees to the soiree – Birdie Jay (Kate Hudson), Duke Cody (Dave Bautista), Andi Brand (Janelle Monae), Claire Debella (Kathryn Hahn) and Lionel Toussaint (Leslie Odom Jr.) – has them figuring out the puzzle boxes (in some interesting ways) and setting off on their invites. They are greeted by Miles as he sends the boat that brought them away. They are on their own.

The plot thickens as Miles tells them about his murder yet to be and sets the wheels in motion. Then, he notices Benoit and, confused, tells the detective that the invitation was a mistake. The mystery solvers, who call themselves “disrupters,” set out to resolve the murder. So far, it is a whodunit that peeked my interest a bit.

Here Johnson and his creative team shift gears and begin the story again, but with a very different POV. This is the point – at just about the halfway mark – where the movie starts over and sets us onto the path of the whodunit I did not expect. I think I will leave the twists and turns for you to find out and enjoy for you.

The cast is an amiable collection of likable actors playing some really despicable people. Kate Hudson stands out as Birdie, who confuses speaking what she thinks with speaking the truth – two things diametrically opposed, as it turns out. The rest of the cast of characters have obvious fun in their antics. Daniel Crag looks like he is on a roll with Benoit Blanc (like being James Bond was not being on a roll?) and there will likely be more BB movies to come.

The production takes advantage of the warm and sunny locale and beautiful people as the backdrop for a clever little mystery. It does not mean I will go back and watch the first again, but maybe I will greet future entries more kindly.