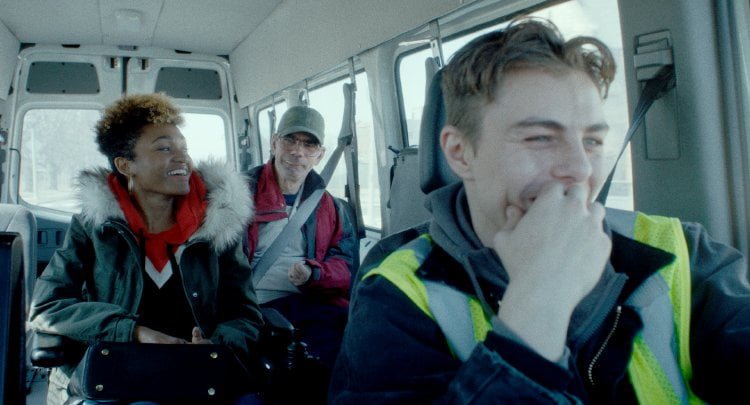 Vic (Chris Galust) is a medical transport driver responsible for delivering his passengers quickly and safely. Buit, today, he faces a crisis: His auntie has died and he must transport her extended family to the funeral, and do his paying job, in “Give Me Liberty,”

Medical transport driver Vic (Chris Galust) is too good for his own good. After averting a disaster
when his grandfather (Arkady Basin) decides to cook a chicken first thing in the morning, Vic struggles to get an obese man out of his apartment building and to his job before continuing on with his daily clients. Already running late, Vic attempts another good deed when his granddad and a group of other elderly Russians need transport to a funeral, incurring the wrath of ALS patient Tracy (Lauren 'Lolo' Spencer), who is trying to get to her job helping the mentally disabled in “Give Me Liberty.”

Russian cowriter (with producer Alice Austen)/director Kirill Mikhanovsky used his own experience driving a medical transport van in Milwaukee, one of his first jobs in this country, to create this hilarious, warm-hearted and optimistic tale of one day chaotically unraveling despite the best efforts of the well-intentioned Vic. In the process, Austen and Mikhanovsky have broken out three amazing talents in Galust, Spencer and Maksim Stoyanov, none of whom have been in a film before. That their cast of non-professionals and unknowns represents immigrants, minorities and the disabled in such a unifying and uplifting work is all the more reason to embrace an independent film that just might restore your faith in humanity.

As Vic keeps dispatch at bay with repeated promises of ’10 more minutes,’ he’s challenged by mattresses stuck in doorways, streets closed off for local protests and a sudden diabetic attack.
When he makes a quick stop back at his own apartment, he’s greeted by his grandfather, locked out in his underwear in a hallway full of smoke, still determined to cook that chicken. His most recent inadvertent passenger, Dima (Stoyanov), a boxer from the Bronx just arrived to discover his aunt is dead, helps with granddad, the burnt chicken transformed into takeout.

Careening around in a bus full of Russians singing along to an accordion, Vic no sooner delivers Michelle to her day care talent contest, when he must attend to a woman with low blood sugar. Tracy is now two hours late, but is convinced that a stop at the cemetery will only take 10 minutes. When her wheelchair gets stuck on the uneven terrain, Dima scoops her into his arms, just as the group discovers they are at the wrong grave. As Vic gets a second chance from his boss, Dima hosts a raucous wake in his aunt’s apartment after charming the building’s
Security Guard (Josette Daniels). Then there is the couch Vic’s Mom (Zoya Makhlina) mom needs moved for her Soprano’s (Lindsey Willicombe) recital that evening, where Dima will become smitten with Vic’s sister Sasha (Darya Ekamasova). And when Tracy’s brother gets caught up in the local protest turned riot, it will become a group effort to bail him out while
Tracy's Grandma (Dorothy Reynolds) looks askance at Vic’s grandfather cooking a chicken in her kitchen.

This is a film I have a real affection for, despite its shambolic second half. In its early goings, “Give Me Liberty” is like the medical van version of “Uncut Gems,” so intensely fast paced and chaotic is its action. Hand held camerawork keeps us in the midst of everything as various Milwaukee neighborhoods speed by (and while the Russians make no bones about calling Tracy’s black neighborhood sketchy, they fully and refreshingly embrace its occupants). Galust, found working in a Brooklyn bakery, has an utterly natural Everyman appeal that makes it perfectly natural Tracy’s annoyance would give way to an altogether different feeling for him. Spencer herself is a real firecracker as Tracy, a strong and independent woman unafraid to speak her mind whose innate sense of humor helps her through the rougher patches. Maksim Stoyanov steals every scene he’s in as Dima, a constantly eating, immensely charming life force.

American may be going through some dark days, but Kirill Mikhanovsky’s “Give Me Liberty” gets to what really makes it great. It delivers an exhilarating jolt of hope.

Director and co-scripter Kirill Mikhanovsky, with co-writer Alice Austin, create “A Day in the Life” story that starts off at a frantic, manic pace and keeps it up for the bulk of this amusing tome.

Vic, you get the feeling from the very beginning of his story, is in way over his head with doing his job – people depend on him for their safe delivery to medical care – and meeting the demands of his extended family to get them to the funeral on time. While this seems like just a logistical problem for the harried driver, the constant loud and raucous banter of the senior citizen funeral-goers and a bellicose Russian boxer named Dima (Maxim Stoyanova) readily ramp up Vic’s tensions. Also, his boss insists he return to base immediately or lose his job,

Chris Galust embodies the panic, confusion and empty promises that make up Vic’s fragile psyche. He really wants to do right by everyone under his care and get them all to where they bare going – on time. His good intentions, though, are a major reason for his manic and frantic day. The supporting cast, particularly Dima, steals the show at every opportunity and help provide the laughs and chuckles to “Give Me Liberty” that make it a lot of fun. I give it a B-.