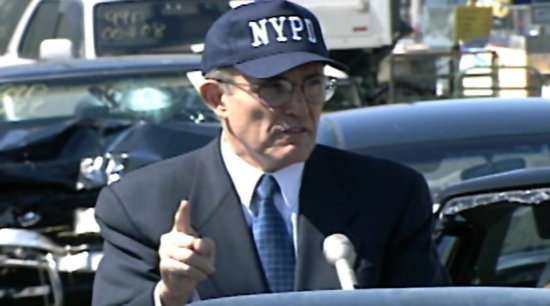 In anticipation of former New York City mayor Rudy Giuliani as a potential presidential candidate in 2008, director Kevin Keating ("Hell's Angels Forever") condemns the man who was all but canonized on 9/11 with his biased recounting of Giuliani's contentious political history. As if there is any doubt of his purpose, Keating titles his documentary with the alleged incendiary quote from racist cop Justin Volpe, "Giuliani Time."

While Keating's motives may have the public interest at heart, his methods undercut his message. At 118 minutes, Keating has overstuffed his film, often reaching for nebulous straws which he fails to justify as anything but negativism. Giuliani had mob ties in his family tree? By trying to visit the sins of the father on the son, Keating unwittingly gains some sympathy for his subject. Even non-New Yorkers will be familiar with most everything reviewed by Keating. He begins with the Broken Windows theory, the very cornerstone of Giuliani's efforts to clean up New York City. Get rid of the graffiti, the litter, the eyesores that make a neighborhood look run down, the theory goes, and crime will go away with them. Giuliani's first target - the Hefty-bag wearing windshield washers, estimated as a group of less than seventy, an infinitesimal percentage of the city's 8 million. (Studies have since poked holes in the Broken Window theory as being racially motivated, but there's something common sense about it that continues to nag after the explanations.) Giuliani is depicted as a racist again by the scandals that haunted his police force, first with the rape and beating of Haitian immigrant Abner Louima in a police station washroom, then with the overkill shooting of the innocent Amadou Diallo. He is a turncoat because he criticized former boss David Dinkins (Giuliani was Mayor Dinkins' attorney general) after Dinkins supported his run for office. He is heartless because he makes fun of a radio caller who attacks him on-air. Keating crosscuts to the severely handicapped man in his apartment, giving us information the mayor never had when he used the typical tactic of a radio talk show host when dealing with an unfocussed rant. Giuliani's attach on free speech, by withdrawing city funding from the museum showing the infamous Chris Ofili painting of the Virgin Mary which incorporated elephant dung is more than probably the same response of many of his Catholic, blue collar and older constituents. Most surprisingly, Keating barely skims the surface of Giuliani's scandalous sex life, incorporating a press conference by second wife Donna Hanover relatively late in the game. And yet Keating's work is certainly thorough and he has done a very good job of aligning Giuliani with our current president (the doc opens with Giuliani recounting that when he saw a burning body plummeting from one of the Towers, he grabbed his police chief's arm and said 'Thank God George W. Bush is our president,' a remark which sounds incredibly odd and self-serving in retrospect). In fact, anyone who believes Bush's undermining of civil liberties is a huge issue will probably be terrified at the thought of President Giuliani. "Giuliani Time" may come as a wake up call to those who did not live in New York city during the Rudy years and could be a useful democratic campaign tool in 2008, but I fear its obvious agenda could well invite a backlash. A little humor and self restraint might make an uninitiated audience more receptive to Keating's fervent message.

Prior to the horrific events of 9/11/2001, the mayor of New York, Rudy Giuliani, made his reputation with his law and order program (called, among other things, broken windows”) and his efforts to reduce the city’s welfare rolls. Documentary filmmaker Kevin Keating tells of the life and times of the Rudy G and his rise to power in a less than glowing light in “Giuliani Time.” Rudy Giuliani, since September 11th, has attained icon status as an international hero and a cool headed and capable politician and leader. But, the road he traveled to gain the mayoralty of the world’s most famous city, according to Keating, is one littered with charges of police brutality and a cavalier reduction of the city’s welfare rolls in favor of a nebulous “workfare” program that some consider nothing less than slavery. Kevin Keating uses a variety of documentary devices – talking head interviews, news footage from the decade preceding 9/11, the participation of ranking city officials such as the former NYC police chief, the schools commissioner, past New York City mayors and journalists, policemen, artists and the homeless and poor. Even Donald Trump makes an appearance or two. The doc follows Giuliani’s career from his earlier days as a Reagan administration official and successful federal prosecutor where he made a name for himself in the political world of what he called “The Capital of the World.” Rudy Giuliani won the New York mayoral election on a law and order platform and entered the office hell bent to take control of crime with his “broken windows,” “quality of life,” “zero tolerance” and “stop and frisk” policies geared to take care of the minor problems, the idea being that fixing the little things would automatically correct the big problems, too. The result was a city that saw a major downturn in crime and an increased rise in tourism and economic prosperity. But, it also meant a greater gap between the rich and the poor with the poor suffering more than ever. Keating also concentrates on Giuliani’s dubious record on welfare reform in NYC. He made it his avowed mission to reduce the fiscal strain on the city with his WEP (Work Experience Program) or “workfare” that obligated welfare recipients to take menial jobs or lose their benefits. The program made no provisions for job training, forcing people to take whatever work is offered, such as cleaning streets. The poor, in effect, became poorer in a city experiencing unbridled prosperity – for the rich. The chronicle also follows Giuliani’s failed attempt to run for the US Senate against Hilary Clinton in 2000 where his bout with prostate cancer gave him excuse to withdraw from a losing fight. In fact, a failing marriage and a much publicized affair turned public opinion against the senate candidate. His career appeared to be all but over, steeped in First Amendment violations, racism and a political rift in the city. Then came 9/11 and, suddenly, Rudy Giuliani became an international hero and Time magazine’s Person of the Year,” opening up his world to become the favored candidate for the 2008 GOP presidential nomination. Giuliani Time” is a liberal filmmaker’s attack on conservative Giuliani that is well-documented and based on much more than circumstantial evidenced. It is impossible to downplay the man’s role in events following the September 11 attack as he rallied the city and the nation at a time of grave crisis. But, his track record prior to that terrible event cannot be ignored, giving the viewer of “Giuliani Time” much food for though. Keating wears his heart on his sleeve, making the film have the feel of a political axe to grind.