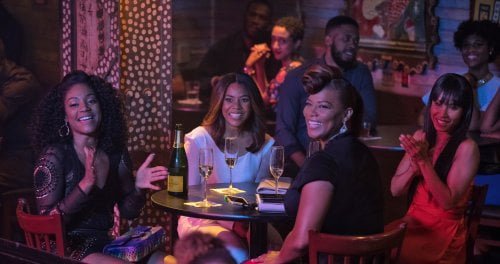 In college, they were known as the Flossy Posse, but life has gradually overtaken the four best friends. When the most successful of the group, life guru Ryan Pierce (Regina Hall) is offered the keynote speaking position at Essence Fest in New Orleans, she decides to share the perks and reunite celebrity blogger Sasha Franklin (Queen Latifah), nurse and single mom Lisa Cooper (Jada Pinkett Smith) and group wild child Dina (Tiffany Haddish, "Keanu") for a "Girls Trip."

The latest R-rated comedy is a breakout vehicle for Haddish, but Malcolm D. Lee's ("The Best Man") movie is just another "Bridesmaids" rehash. "Barbershop: The Next Cut's" Kenya Barris & Tracy Oliver, Karen McCullah ("10 Things I Hate About You") and Erica Rivinoja ("Trolls") give us four cliched characters with the usual friendship and life obstacles, mix in pee showers and a couple of penises, then wrap it all up in sisterhood. If all it takes to make you laugh is a naked man, this one's for you. Ryan's agent Elizabeth Davelli (Kate Walsh, "The Perks of Being a Wallflower") is beside herself over a potential deal for Ryan and her ex-pro football player husband Stewart (Mike Colter, TV's 'Luke Cage') for a TV talk show and merchandising franchise. Sasha's trying to hide the fact that her blog is drowning in debt, a yet-to-be-revealed source of friction with Ryan. Lisa's forfeited her sex life for motherhood. Dina's still partying like the old days, but woe to anyone who does wrong by a sister. Trouble begins to brew when Sasha's sent a picture of Stewart with another woman. The women try to hide the news from Ryan, but the other woman, Simone (Deborah Ayorinde, TV's 'Luke Cage'), shows up and she's not shy. Lisa catches the eye of Malik (Kofi Siriboe, "Kicks") on Bourbon Street and when he shows up in their hotel lobby, she's emboldened enough to go for it...at least until she mistakes his erection for an arm. Dina takes on Stewart, teaches Lisa how to deal with Malik's size and spikes all their drinks with true wormwood absinthe right before Ryan is to meet with Bethany (Lara Grice, "The Big Short"), the woman who wants to market her 'have everything' lifestyle. Meanwhile Ryan's been enjoying the attentions of old college pal Julian Stevens (Larenz Tate), who's performing at the fest. "Girls Trip" follows a well traveled road with no surprising detours. There are a couple of brawls, a couple of fully frontal male nudes and a couple of zipline peeing incidents (which, as depicted here, are ludicrously overdone). Essence Fest is prime celebrity cameo ground for the likes of Common, Sean Combs, Ne-Yo, Carla Hall and more. Grade: