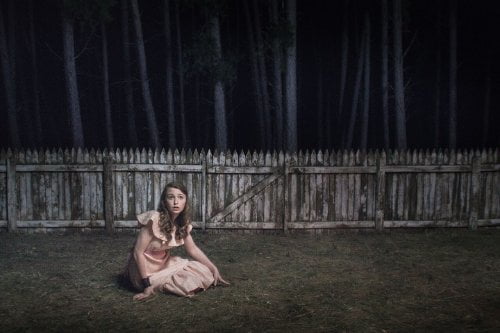 Greta Driscoll (Bethany Whitmore) is an awkward loner at a new school when she's approached by Elliott (Harrison Feldman), an outgoing nerd wearing an enthusiastic heart on his sleeve. But Elliott's attention draws Jade (Maiah Stewardson) and her twin minions Saph (Fiona Dawson) and Amber (Grace Dawson), three sniffy girls obviously up to no good. Greta quietly maintains a friendship with Elliott, but when her well-meaning mom Janet (Amber McMahon) invites the whole class to Greta's fifteenth birthday party, the horrified Greta takes off into a journey through her Id where she discovers she's been a "Girl Asleep."

Rosemary Myers developed a trilogy of teen plays with writer Matthew Whittet for the Windmill Theater, the last of which she's turned into her feature film debut with funding from the Adelaide Film Festival. But despite her film's stage origins, it's obvious she's been cinematically inspired, most notably by Spike Jonze and Charlie Kaufman whose "Where the Wild Things Are" and "Eternal Sunshine of the Spotless Mind" are obvious influences here. But those films set high standards and Myers' film begins to flag just when their effect kicks into high gear. Fortunately, Myers has one more trick up her sleeve, her finale adding yet another shading to her coming-of-age tale. The film begins with a studied, brightly colored composition of Greta, in knee socks and hideous school uniform, on a school bench in boxy 1.33:1 ratio, a visual right out of Wes Anderson's playbook. She's withdrawn, almost frightened in her surroundings. When Elliott, with his wedge of frizzy red hair and matching attire, enters the frame, the energy changes, his unabashed wooing charming. Jade's trio is right out of "Heathers" or "Mean Girls." Back at the house, retrofitted to the '70's as "Parents" was to the '50's, we meet Greta's quirky family. Dad Conrad (screenwriter Whittet, 2013's "The Great Gatsby") is fond of short shorts and bad jokes. Mom runs the household from her treadmill, her current focus pushing Greta out of her shell. Older sister Genevieve (Imogen Archer) seems a truculent teen, her family a distraction from boyfriend Adam (Eamon Farren, "Red Dog," "Chained"), a doppelganger for "Dazed and Confused's" Wooderson. Elliott is invited to Greta's room where he learns of her love of plastic horses and Swedish pen pal, also named Greta, but where his kiss is shut down. Janet invites him to a Chinese themed family dinner which we view from a table center lazy Susan. Greta pitches a fierce battle against her mother's party plans, finally succumbing after dad intervenes. She puts on the girly dress mom's bought and stands back as her entire class boogies in in ones and twos to 'You Make Me Feel (Mighty Real).' Then the Jadeites arrive with a gift of a mix tape. Their self-made song is lyrical bullying blared through speakers. Elliott attempts a mix of passion and compassion and is rebuffed by Greta with Jade's words. She runs off into the dark woods behind her house, encountering wild things, a fierce huntress (who may or may not symbolize that pen pal) fighting off wolves and Ozian encounters with dad, mom and Adam. Hints to Greta's turmoil are scattered about the film like bread crumbs. She's asked if she has her period in the girls' room. An attachment to a music box draws her into the forest, where her plastic pony becomes animated. Her real issue is hinted at through misdirection in the name calling of the bullied and the bullier. The production delights in its 1970's reality with photos like one on French lounge singer Benoit Tremet's album cover come to life a la "Harry Potter" and title cards like 'Later that night' melded into the art direction, that one appearing on a bucket of fried chicken. Things get rougher when visualizing Greta's Id. Lighting is often off, the filmmaking less polished and Whitmore's acting less assured. What should be fantastical becomes a bit of a drag. Thankfully, it's saved by some unexpected sympathetic advise from Genevieve that gives Greta the courage to transition out of childhood. "Girl Asleep" threatens to overwhelm with twee, but its ensemble cast counter their quirks with genuine caring and Greta's embrace of her adult self is a joyful surprise I didn't see coming. Grade: