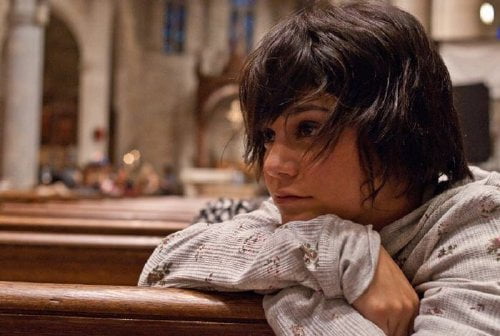 16-year old Apple (Vanessa Hudgens) is a street smart kid living on the wrong side of the Jersey tracks. Her mother, June (Rosario Dawson), is a prostitute and drug addict whose plan is to have her daughter follow in her footsteps. But, the headstrong teen will not accept that life and she runs away to find the father she has never known in “Gimme Shelter.”

Writer/director Ron Krauss gives this 'based on a true story' an Afterschool Special feel with vaguely unsettling Holy Roller overtones, a secret agenda delivered like cod liver oil. Vanessa Hudgens dials her street punk up to 11 and Krauss fails to pull her back a bit. There's an impressive supporting cast - Anne Dowd, James Earl Jones, Brendon Fraser - but it's an almost unrecognizable Rosario Dawson as Apple's drug addict mother who's the really memorable one here. She's just crazy with a razor blade between her teeth.

Writer-director Ron Krauss takes the true life story of teen survival and brings it to the big screen with his star Vanessa Hudgens as Agnes ‘Apple’ Bailey. “Gimme Shelter” is an earnestly told based-on-fact story about how a young woman who, against all odds, sets off to escape her dangerous existence with her mother to find the man who fathered her 16-years ago. Apple’s journey takes her from the dangers of her life on the streets of New Jersey to the opulent home of her birth father, Tom Fitzpatrick Brendan Frasier), a very wealthy Wall Street broker. It is only when Tom agrees to take his daughter into his home with wife Joanna (Stephanie Szostack) that Apple learns that she is pregnant – from the one and only time she was with a boy. “Gimme Shelter” changes direction when Apple runs away from her new home, sleeping in cars and eating out of dumpsters. She meets a kindly old priest, Frank McCarthy, who gets her into a home for unwed teen mothers. Tom winks in and out of her life (with a one-note performance by Brendan Frasier) until the film’s feel good, happily-ever-after ending. Vanessa Hudgens using scowling and bad eating habits to depict Apple, who, for good reason, does not trust anyone. The actress does not give her character much shading with anger as the predominant emotion. Better, in a sleazy way, is Rosario Dawson as Apple’s drug addled mother who sees the girl as a welfare check. Her June is a cunning, street-wise lady who holds the legal custody of her daughter as a cudgel, using threats and wheedling in her attempt to maintain control over Apple. Brendan Frasier mailed in his portrayal of her ambiguous father. (Why, once he made it big on the Street, did he not try to find his daughter and save her from a harsh life? We know he sent her a letter when Apple was 8-years old.) The story of a girl fighting for life against the “system” that keeps her in her mother’s torrid life is one that should be told and Krauss does just that, but without much dimension. The story is structured in loosely bound chapters as Apple moves from one phase of her life to another, giving the film a disjointed feel. “Gimme Shelter” wears its heart on its sleeve but he subject matter is best left to teen-oriented after school cable programming where it might influence its audience.