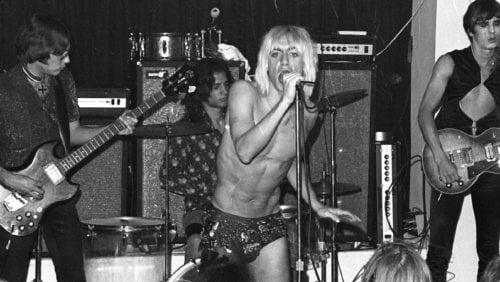 In 1973, we are told, the Stooges were falling apart. They couldn't make a living. People were throwing things at them during their live performances. But the hugely influential band kept reemerging in various forms and were inducted into the Rock and Roll Hall of Fame in 2010. Writer/director Jim Jarmusch ("Only Lovers Kept Alive") profiles the band that was punk before the punk movement had a name in "Gimme Danger."

This is Jim Jarmusch's second documentary after 1997's poorly received "Year of the Horse" and while it's a messy, scattershot affair, the Indie auteur's love of the band is clearly evident. After noting the first of many downward slides, Jarmusch visits Stooges frontman Iggy Pop sitting in a cluttered laundry room discussing childhood influences like 'The Howdy Doody Show's' Clarabelle the Clown and Soupy Sales, whose admonition that letters sent to him should be 'twenty-five words or less' became Pop's song writing mantra. Jim Osterberg (Iggy) grew up in a trailer park in Ann Arbor Michigan, his bedroom only about 9x5 feet until his folks gave him their master in order to get his drum kit out of their living room. He says he was lucky to live in such close quarters with his parents because he really got to know them (although we really don't, other than to learn Iggy was mocked because his dad's Cadillac was almost as big as their house and that years later they colluded with their local pharmacist to get Iggy under-the-table methadone treatment for heroin addiction). As a teenager, he met Scott Asheton and began to teach him drums. Asheton's brother Ron began to play with them and their sister Kathy pointed out Dave Alexander who became their bass player. After seeing the MC5, Iggy tells of how they 'joined their circus,' both bands getting signed by Elektra (Ron called The Three Stooges's Moe Howard to get a blessing on using the name - his reply was priceless). Jarmusch takes a punk montage/collage approach to telling the Stooges story, using not only copious interview footage with Iggy (sometimes with Scott Asheton, who died in 2014), the usual stills and archival footage, but educational, feature film and television clips to 'comment' on the action (when Iggy mentions that John Cale and Niko reminded him of Gomez and Morticia, Jarmusch inserts a clip of the old TV show that segues into Wednesday dancing just like Iggy). This was a band that never went the expected route, splintering and reforming so many times over the years, that Jarmusch's approach sometimes leads to confusion. We hear little of Bowie's interactions with Iggy, instead learning of how his interest brought Iggy to London (along with James Williamson, who had joined the band in 1970) and how Bowie's manager Tony Defries envisioned Pop as Peter Pan on Broadway. Other than drug addictions and deaths affecting the music, we learn little of the band's personal lives, Iggy's wife only mentioned in passing during his Hall of Fame induction speech. But there are so many gems scattered throughout. Consider that Williamson went on to a degree in electrical engineering, eventually becoming a VP at Sony (we're shown his corporate photo), before rejoining the band for extensive touring in the 2000's. But there is no mistaking the power of the music and Pop's on stage presence. We witness the 'invention of the stage dive' and Iggy prowling and contorting from the early 60's through the present day. Iggy may not like being labelled, but the Stooges's influence on punk is unmistakable, Jarmusch rolling out a stream of album covers, then offering a montage of everyone from the Sex Pistols to Sonic Youth covering their songs. "Gimme Danger" is a chaotic celebration of a band that never achieved the heights of those they influenced. I see back catalog sales in their future. Grade: