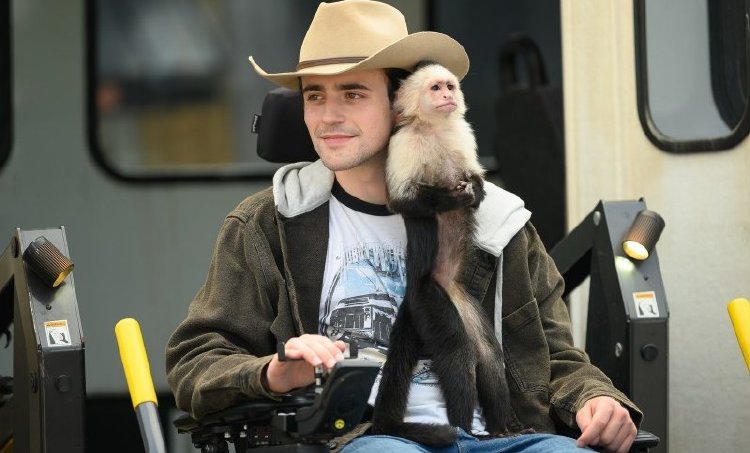 In North Carolina to celebrate July 4th at his family’s vacation home, Nate Gibson (Charlie Rowe, "Rocketman") amazed his buddy Benji (Olly Sholotan) by jumping off a steep cliff into the water below.  The jump was successful, but when the family gathered for dinner, Nate’s sister Katy (Josephine Langford, the "After" series) found him in spasms on the bathroom floor.  A hospital back home in Nashville delivered the prognosis of amoebic meningitis from lake bacteria.  Nate survived, but as a quadriplegic.  Needing help caring for her son, whose suicidal depression weighed heavily, Claire Gibson (Marcia Gay Harden) found a unique service animal, a capuchin monkey who would lift Nate’s spirits in “Gigi & Nate.”

Loosely based on Concord, MA native Ned Sullivan and his capuchin Kasey (so loosely based that the book written about them by Ellen Rogers isn’t credited?), “Gigi & Nate” is like one of those old disease-of-the-week movies crossed with a rollicking 1960’s Disney family film before it veers into an unnecessary social activism statement.  Writer David Hudgins (TV's 'Friday Night Lights,' 'Parenthood') starts off well enough, but doesn’t know when to quit and director Nick Hamm ("The Journey") does nothing to rein in the more ludicrous inventions on display here – in fact, he exacerbates them.

After a prologue which outlines Gigi being rescued from a run down, wind swept ‘petting zoo,’ we turn to the boisterous Gibson family vacationing in North Carolina.  Hamm and Hudgins set the stage for disaster early, only to subvert our expectations, allowing for more time to get to know the family.  Businessman dad Dan (Jim Belushi) is frustrated in airport terminals trying to return for the holiday while force-of-nature mom organizes dinner in the midst of her grown children’s comings and goings.  Younger sister Annabelle (Hannah Alligood, TV's 'Better Things') is thwarted from joining those heading for the lake, staying behind with day-drinking Mama Blanche (Diane Ladd).  Nate meets local girl Lori (Zoe Margaret Colletti, "Scary Stories to Tell in the Dark") at a fireworks stand, convincing her to join them.   Catastrophe strikes when no one expects it.

Claire, losing confidence in a local doctor, demands that Nate, whose compromised health is signaled by a ringing in his ears as if underwater, be airlifted to Nashville.  After a period of touch-and-go, we are abruptly returned to the Gibson’s Nashville home where Nate now enjoys his own glass house out back complete with built in overhead lift and koi pond (leading one to wonder just how average folks contend).  It’s that koi pond that Nate attempts to use to off himself, leading Claire to think outside of the box.

Gigi’s arrival is greeted enthusiastically by Nate and the women of the house while dad and the family dog have other ideas.  It takes a while for Gigi to even come out of her large cage, but once she does, she takes on the duties of physical therapist Nogo (Sasha Compère) in an obviously CGI-generated montage.  And it is here that “Gigi & Nate” goes off the rails.  Not content with telling the tale of a young man relearning to embrace life with tremendous obstacles and the help of a monkey, the filmmakers need to throw in dog and monkey created pandemonium, an ill-considered trip to a college party that looks like it’s taking place in a full blown discotheque and the ensuing manufactured ire of animal rights activist Chloe Gaines (Welker White, "The Irishman") who brings a mob of protesters and the local news to the Gibson home.

Rowe brings us along on an extreme emotional journey and Gay Harden is a live wire as Claire but the filmmakers’ abrupt turns from one story line to the next leaves the rest of the cast in the lurch, Langford saddled with a particularly off-putting speech about how her brother’s handicap means he can’t be a ‘normal person,’ Lane veering from alcoholic ‘joke’ to late breaking problem solver.  “Gigi & Nate” is a film that never settles on just what it wants to be, playing like something helmed by multiple filmmakers then cobbled together.  It begins and ends well, but it’s a mess in the middle.

A jump off a high cliff into the water turns tragic when Nate (Charlie Rowe) becomes a paraplegic from a bacterial infection forced into his brain. He thinks that he is fated to be paralyzed and isolated until a new, little face appears in his life in “Gigi & Nate.

I thought long and hard about what if I suffered Nate’s paralysis and, to me, it would be devastating. Then, I thought about the difference a smart little animal like a capuchin monkey would make in that isolation and that is the essence of “Gigi & Nate.”We meet our adorable little heroine as she is taken from a shoddy family “circus.” Then, we watch Nate, following his terrible accident, as he tries to cope with therapy and the painful and difficult road to any possibility of even a little recovery. For his mom (Marcia Gaye Harden), it is equally difficult for her to watch Nate struggle, and she contacts a service animal organization.

The result is Gigi, a gentle capuchin monkey, and for Nate it is love at first sight. For about two-thirds of the movie, the focus is on Nate and Gigi bonding and, soon, she is helping with his physical therapy and making a huge difference in his life. The feel good aspect of the story ends when Nate, grocery shopping with Gigi’s help, is confronted with what I can only call a “Karen.”

While in the market, the Karen is offended, disgusted even, that an unsanitary monkey be allowed into the grocery store and makes demands that they leave. The story becomes a David versus Goliath legal battle but, here, David loses and the gentle relationship between man and monkey is jeopardized.

Up until this conflict, which seemed manufactured just for the movie, we had a sweet “buddy” flick between the two primates, one tiny, one large. The obstacle created by the Karen and her equally narrow-minded cohort, felt totally artificial, even if, as claimed, it is a true story.

I like the story and relationship between our two stars but the conflict that threatens their existence seems forced and just plain nasty. The Karen should have had a Simon Legree-like mustache to twirl, at least that would be satire. It is too bad that the nice cross-species story of a helpful little critter is lost in favor of angst and melodrama