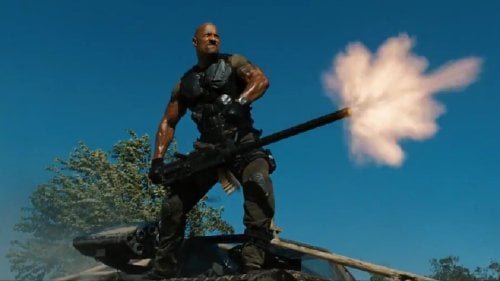 When the elite multi-national military unit known as G.I. Joe is terminated by the President (Jonathan Pryce, "Brazil"), the remaining members find themselves challenged by Zartan (Arnold Vosloo, "G.I. Joe: Rise of the Cobra"), the Cobra-affiliated mercenary, who just happens to have disguised himself as the Commander in Chief. With the world believing Zartan's ruse, it's time for "G.I. Joe: Retaliation."

Director Jon M. Chu ("Step Up 3D") keeps the action moving and his stars charismatic but "Zombieland" writers Rhett Reese & Paul Wernick have cobbled their plot together from everything from "Star Wars" (the Darth Vaderish Cobra Commander) to "RED" (a retired yet heavily armed Bruce Willis) to the "Lethal Weapon" series (Duke's relationship with Roadblock's 'girls') and more. "G.I. Joe: Retaliation" is as silly as the stories kids may have made up playing with the action figures, but it has charms for the right audience. Dwayne 'the Rock' Johnson ("Snitch") and Channing Tatum have great buddy movie chemistry as Roadblock and the unit's leader Duke, so it's a shame that Tatum doesn't stick around too long. He's a hero who saves new recruit Flint (D.J. Cotrona, "Dear John") from Zartan's scorched earth, leaving Roadblock with only one more Joe on hand, tough lady Jaye (Adrianne Palicki, "Red Dawn"). Meanwhile in the Himalayas, Snake Eyes (Ray Park, "Star Wars'" Darth Maul) and Jinx (Elodie Yung, "District 13: Ultimatum") are busy zip lining around cliffs recovering the traitorous Storm Shadow (Byung-hun Lee, " G.I. Joe: The Rise of Cobra") to return him to Blind Master (RZA, "The Man with the Iron Fists"). Roadblock and his trio somehow make it back to U.S. soil and find retired General Joe Colton (Bruce Willis) to help them stop the false President from playing a game of nuclear chicken with India, Russia, France and North Korea so Cobra Commander (Luke Bracey, "Monte Carlo") can take over the world. Both Johnson and Willis are in much finer form than in their own recent vehicles, Willis enjoying some faux-chauvinistic repartee with the alluring Jaye. Lee makes a dashing, misunderstood hero with incredible moves. On the side of evil Vosloo's role is mostly played by Pryce and Bracey's only glimpsed briefly without his helmet but Ray Stevenson's (HBO's 'Rome,' "Thor") Firefly gets one hell of an action sequence riding a fly-away, weaponized motorcycle into a prison break. He also is namesake to another of the film's great ideas - insect drones which are as much fun to watch as they are disturbing to contemplate. With the exception of that amazing Himalayan sequence and a few flying Chinese stars, there is little reason for this movie, as most, to be in 3D, but that cliff flying scene sure is eye-popping. Cobra's nuclear dare costs the world London when he pulls out his secret satellite weapons. There are plenty of holes in the story, but it moves at such a breathless and economical pace there's not much time to ponder them. "G.I. Joe: Retaliation" is all swagger and spectacle.