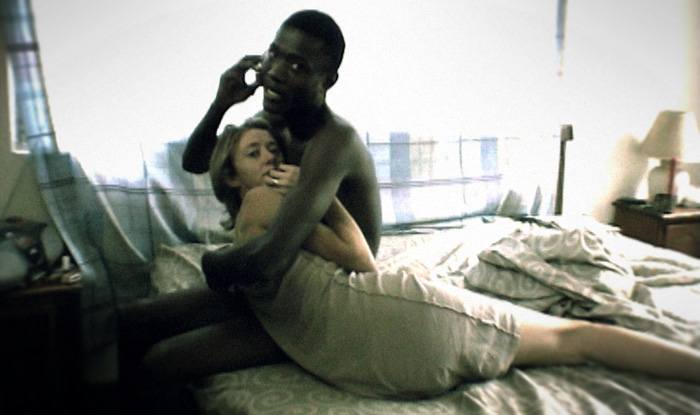 During Haitian president Jean-Bertrand Aristide's last months in office, his allies needed to shut down any popular resistance to his rule. They enlist the aid of the 'chimeres' (ghosts), young gangstas that rule the mean streets of the sprawling Port au Prince slums. These young, violent men take the task to heart, terrorizing the masses as the "Ghosts of Cite Soleil."

In the months leading up to the 2004 overthrow of Haitian president Jean-Bertrand Aristide, Danish director Asger (son of "The Perfect Human's" Jørgen, featured in "The Five Obstructions") Leth and Serbian cinematographer Milos Loncarevic were the first white men to enter the slum the United Nations branded the most dangerous place on earth. There they documented the lives of two of the gang chiefs Aristide insisted didn't exist, the "Ghosts of Cité Soleil." This flashy looking documentary scored by Haitian singer Wyclef Jean is such a frightening inside look at a poverty stricken society ruled by violence that it is a marvel that it got made. Asger's subject was suggested by his father, who has lived in Haiti for years, and cinematographer Loncarevic was led to the two brothers at the center of this piece by French relief worker Éleonore 'Lele' Senlis, who, ironically, becomes the point in a love triangle. 2Pac is an extremely good looking, charismatic leader who fancies himself a rapper. At twenty-six years of age, he is the oldest of Cité Soleil's five chiefs - this is a calling that comes with a short life span. 2Pac idealizes his daughter, Taina, and distributes cash to needy kids in need of food and education. But 2Pac is becoming disillusioned with Aristide and dreams of leaving Haiti like native son Wyclef Jean to become a rapper. 2Pac's young brother Bily believes in Aristide and wants to help his people. Bily even has presidential ambitions of his own. In the first of Lele's narrated journal entries, we hear that she believes in Bily too, thinking he wants to do good for the people of Cité Soleil. So why then, does Lele not only end up in 2Pac's bed, but have the gall to tell Bily all about it? And why is she with either of them if she is there to give aid to those they presumably threaten? Lele, like the filmmakers, are protected by these two brothers as they work in Cité Soleil, but it is always evident that that protection could be eradicated in a moment's notice. One of the film's failings is that it does not question the volatility of the brothers themselves, both whom profess a desire for peace, yet both of whom perpetuate the violence (Bily shoots one of his brother's foot soldiers, or chimerés - the ghosts of the title - in the feet for 'disrespecting' him while 2Pac continually jabbers on about shooting this one or the other). It is unclear why anti-Aristidist Wyclef Jean would support 2Pac (they become telephone buddies), except, of course, for his music. The relationship between the two brothers themselves comes full circle, with 2Pac initially claiming respect for his brother, but later distrust. It is said no two chiefs of Cité Soleil can be present in the same place as one will try to kill the other (and indeed, a third, goes after 2Pac while the crew is filming). When the rebels take control, led by Guy Philippe and Louis Jodel Chamberlain, men whose suspect backgrounds are skimmed over here, they demand the Soleil chiefs give up their weapons. 2Pac decries the cycle of violence between this group and Aristides' Lavalas and when Bily is arrested is sure that he will never be seen alive again. The film's coda of what befell these two is an unexpected road to the expected. Technically, "Ghosts of Cité Soleil" is a marvel of hyperreal imagery (the lights used for night photography truly paint these men as 'ghosts'), MTV style editing and superb sound and music. Dramatically, the story of these two brothers standing apart on the same side of a lethal conflict is engrossing, but Leth and Loncarevic leave their audience too much in the murk when it comes to their subjects' motivational and factual histories.

Two of these chimeres, 2pac and Bily, are gang leaders who embrace their new role as Aristide's ruthless enforcers. Danish docu filmmaker Asgar Leth brings his cameras into the heart of Cite Soleil, the home for over 300000 downtrodden inhabitants and achieves a fascinating, if uneven, documentary as he follow the lives of these young men. The power these two gangsters wield is shocking as they do the will of the Haitian president (though Aristide denied ever employing the chimeres to stay in power). 2pac (nee Winson Jean) and Bily (nee James Petit Frere) are charismatic, complex characters. Though cut from the same mean street cloth, each has his own agenda and follows it with passion. Bily wants out of the gangster life and become a legitimate force in the Aristide government. 2pac (whose moniker comes from his idol Tupac Shakur) wants to get out of the Cite and become a rap star. Complicating their plans is their love for the same woman, Lele (Eleonore Sentis), a French social worker who understands their power within the sprawling slum. The gang aspect of "Ghosts of Cite Soleil" is the real drawer to this political documentary about power and control. It runs out of gas, though, when it takes on a kinder note as it follows 2pac, the family man, who wants to live to see his baby daughter grow up. Helmer Leth treats this sentimentality with a softness that blunts the edginess of the film. The ultra-violence of this microcosm society is what 'Ghosts' is all about.