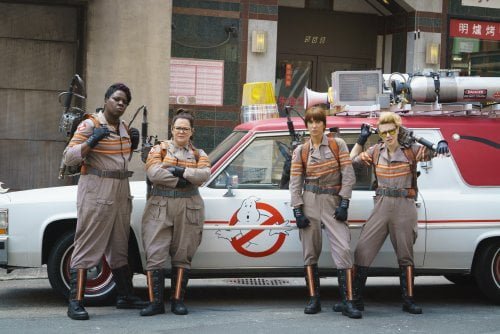 Paranormal expert Abby Yates (Melissa McCarthy) and physicist Erin Gilbert (Kristen Wiig) were united in their belief in the paranormal since high school, but with Erin seeking tenure at Columbia University, she's embarrassed when Abby reissues their book on ghosts. Erin pays Abby a visit to ask her to cease and desist, but finds herself caught up again when Abby and her engineer Holtzman (SNL's Kate McKinnon) are called out to investigate a haunting. When they're pitched by MTA employee Patty Tolan (SNL's Leslie Jones) on her extensive knowledge of the city, the team is complete and the media dubs them "Ghostbusters."

It was only a few months back when "The Boss" was released that I was asking McCarthy to run back into the arms of Paul Feig. Bad advice as it turns out, as McCarthy and husband Ben Falcone's movie was actually marginally better than cowriter (with "The Heat's" Katie Dippold)/director Paul Feig's reboot of a 1984 film whose reputation still mystifies me. The cast is far from the problem as they, including Chris Hemsworth's dim-witted receptionist Kevin, provide all of the entertainment value, but if ghosts can appear from thin air, comedy writing cannot. Direction of crowd scenes is sorely lacking - I've never seen so many extras looking like they have no idea what they should be doing. At the Aldridge House (Boston University Castle and the Ames Mansion), Abby's ghost detector goes off just as the murderous Gertrude Aldridge comes floating out of the basement door. Erin is awestruck, but her admiration of the spirit is rewarded with a vomited gush of protoplasm. She's been slimed. The women continue their investigations in the subway and keep finding devices they deduce are being used to create a vortex. After a very public ghost wrangling at an Ozzy rockfest, the mayor (Andy Garcia) and his assistant (Cecily Strong, "The Boss") tell the team that they'll be publicly debunking them in order to avoid widespread panic. Speaking of debunking, original Ghostbuster Bill Murray makes an appearance as Dr. Martin Heiss who is proved very wrong. All the original members are here, Dan Aykroyd as a cabbie who 'don't believe in no ghosts,' Ernie Hudson as Patty's Uncle Bill, the late Harold Ramis as a bust outside Erin's university office and Annie Potts as a receptionist at the Mercado, the hotel that is ground zero for Rowan North's (Neil Casey, "Adult Beginners," uninspired) vortex. The 8 Hook & Ladder location is rejected for its high rents so the ghostbusters move in above the Chinese restaurant that Abby gets her lunch from (her interplay with deliveryman Bennie (Karan Soni, "Deadpool") is some of the genuine comedy to be found here). Refitted ambulance Ecto-1, Slimer and the Stay Puft Marshmallow Man are given updates. The big climax is an overlong CGI spectacle of blazing proton packs, kept marginally interesting by Macy's parade balloon ghosts from the 1920's. Kate McKinnon's demented enthusiasm is great fun and the last minute insert addressing the movie's prerelease Internet trolls is an inspired in joke. If there's going to be a sequel, maybe the studio would be better off letting their cast improvise the entire thing. Grade: