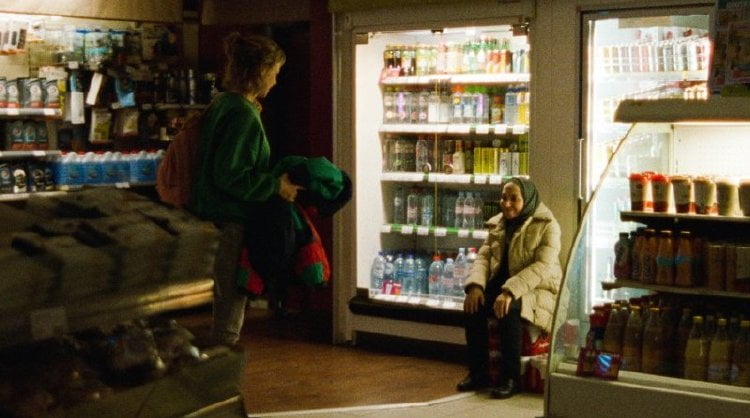 When fifty-eight-year-old widowed Maghrebi Muslim cleaning woman Khadija (Saadia Bentaïeb, "BPM")    falls asleep on the train, she finds herself at the end of the line with no money for a cab.  Forced to walk home across a sleeping Brussels, Khadija helps strangers and strangers help her in the “Ghost Tropic.”

This beautiful film from coeditor (with Dieter Diependaele)/writer/director Bas Devos is a paean to a city under cover of night and the little seen people who populate it.  Khadija’s journey is not only a physical one, but a personal one, capped by an illuminating look at the hidden life of her teenaged daughter, one which both inspires fear and a desire for freedom.  The diminutive Bentaïeb is a big force with everyone whose path she crosses.

We meet Khadija enjoying a hearty laugh with immigrant coworkers before operating a big floor polisher alone in a vast lobby.  Finding herself alone again at the end of the Metro line in the middle of the night, she tries her son Bilal but only gets Voicemail.  She begins to walk streets that are alternately threatening in their eerie silence and beautiful beneath the glow of streetlamps (16mm cinematography by Grimm Vandekerckhove).  When she comes across a huge indoor mall, a Security Guard (Stefan Gota) informs her that it is closed, but takes pity on the woman who needs access to an ATM and lets her in.  We know before she puts her card in that she will not have sufficient funds, but she hides the outcome from her savior who enjoys a few minutes walking about conversing, telling her how much of what she sees will be demolished to make way for a tropical water park.

Continuing on her way, she will find an unresponsive homeless man and his dog and will call 911 for assistance.  When the Medic (Cédric Luvuezo) refuses to take the dog, Khadija frets over another potentially lost soul until it is decided to tie the dog to await its master’s return.  We don’t know why she creeps up on a seemingly empty house in a residential area, but when she is questioned by a man who finds her suspicious she explains that she used to clean for people who no longer live here, covering for the Afghan boy she has seen squatting within, both looking for and giving assistance.  Stopping in at a gas station for hot tea on the cold night, a kindly clerk (Maaike Neuville) closing up shop will offer the woman a ride home.

Spying her daughter on the street with some boys, Khadija asks to be let off and follows the girl from behind.  She’ll report the shop owner who sells them vodka to police on the street, but remain hidden, her observations clearly betraying conflicting emotions.  She will make one last stop where sad news invites another reverie of freedom.  An ambiguous coda which could be past or future on a tropical beach – Khadija’s homeland? – celebrates it.

Khadija (Saadia Bentaieb) toils away every night cleaning offices. After one long shift, she bids farewell to her colleagues and takes the subway home. Exhausted, she falls asleep and wakes only when she reaches the end of the line. Stranded and without enough money to take a taxi, she makes the lonely walk home in “Ghost Tropic.”

Writer-director Bas Devos brings us a quiet slice of life story about a lady, one of simple needs, who finds herself in a bind. “Ghost Tropic” tells Khadiji’s tale as she, unexpectedly, has to find her way home. For the viewer, not much seems to happen. For Khadija, though, it is a plight she must face on a frigid winter night in Brussels with no help, no money and a long, long walk.

This is a real throw-back of a film. Whereas, in this day and age of movies being shot in high-definition video, Devos goes way back in technology to 16mm Kodak film to capture the rich graininess of nighttime as he follows Khadija on her journey. All the time, you want her to be safe and get home.

The film opens on a late afternoon in a room. The image darkens as night falls. Shift to Khadija and her co-workers as they begin their work night, do their jobs, and head for home. We follow our lady on her trek and, when we go back to the static shot of the room of the beginning, it is not just a room. As the morning light brightens, we know that it is not just a room, but a home – Khadija’s home – and that makes a difference on how you feel.

“Ghost Tropic” opens on 8/28/20 at the virtual theaters listed here.